I BEG you … please don’t wait until it’s too late to turn your health around! I remember … years ago … standing in the wings with my business partner, Sarah, watching Harvey Diamond wow a crowd.

Harvey was in the midst of a groundswell for his book, Fit for Life. I eventually ran huge seminars for him and his then-wife, Marilyn. But that night, Sarah leaned against me and said, “I’m so glad we did this BEFORE we got sick.”

Very few things in my life have stuck with me like that. So it’s not surprising that the whole experience with the Diamonds started me down the path to being a Dietitian and an Alternative Medicine practitioner.

I really never expected to go that route. As a chef and a human being, I was always interested in healthy food. But my passion up until then was acting, directing, running a non-profit, and coaching young actors.

But … no … this article is NOT about me. It’s about the growing lack of focus on taking responsibility for your health.

It’s about the daily barrage of messages of vaccines as the panacea-answer to COVID. When you SHOULD be focused on improving yourself and your immunity.

There are two incidents that happened recently to me that I want to share. Both a reflection of “I’ll-just-take-a-pill (or substitute vaccine here)” mentality.

The reality is that … as Sarah said long ago …

if you DON'T take responsibility for your health BEFORE you get sick …it MAY be too late!Click To Tweet

You may end up like one of these people …

Person ONE: The Anorexic

Just this weekend, I received a call from someone. And it always amazes me that … with many of these calls … I feel like Alice falling down the rabbit hole and never hitting bottom.

I started asking her what was wrong. And didn’t catch the “66”.

She told me that she was throwing up all her food … couldn’t keep anything down. And shared with me her fear of fat and her many “stinkin’ thinkin'” (a term used in the addiction community to define addictive, ritualistic thoughts that have nothing to do with reality) ideas about diet.

She then confided with me that she was anorexic (a serious mental disorder where people restrict their eating for fear of getting fat). And quoted what this person or that person on the internet said about eating well.

I realized at that time that her stinkin’ thinkin’ had reached epidemic proportions. She also shared that she was bulimic and messaged her stomach to purge (a nice way of saying that she forced herself to throw up … my apologies to the weak of stomach).

The cause of the throwing up finally solved. Bodies forced to do that will eventually react spontaneously (apologies again).

She Actually Defended Her Behavior …

She went on defending her behavior by citing different experts’ diets. Finally, I got a bit reality-check harsh with her trying to jar her into some semblance of the truth about what she was doing to herself. She started to cry.

I realized that this woman needed a lot more treatment than I could do for her then. I suggested inpatient treatment. She said it was too expensive. And that she had poor insurance.

Then I asked the question. And was startled at the answer. “How much do you weigh?” “66 pounds” “How tall are you?” “Five-two”.

All I could say was … “Get to a hospital NOW! YOU COULD HAVE A HEART ATTACK!”

Wanna know why I think she didn’t?

Well … her eating disorder has such a vicious hold on her that it most likely will win. A strong sub-personality like that thinks that if it doesn’t stop doing its behavior … no matter how crazy and life-threatening it is … that you’ll die.

And she may. She’s aware of that. And I told her that several times. All the rest of the day I kept thinking, “Why didn’t she call before …”

I received a call last week from a woman whose husband was in a nursing home. “He can’t eat anything”, she said.

Turns out that he had multiple problems. And even the nurse at the nursing home was suggesting that she seek out someone who knows about gut-healing supplements. That’s why she called me.

Now when someone is in a nursing home it’s almost impossible to eat a healthier diet. Sounds like an oxymoron but … I work in them … I know. To me, it’s a total disconnect.

But I DID recommend some gut-healing supplements from my Fullscript supplement dispensary. At the time, without a health history or reviewing medical records or labs …. something I ALWAYS do with someone like him … all I could do was recommend a few generic things.

She never followed through. I later got an email from her that said her husband was taken to the emergency room due to internal bleeding (which may have been the reason why he couldn’t eat) and added “the doctors are still trying to find out what the problem is.” They’re probably still trying …

All the rest of the day I kept thinking, “Why didn’t she call before …”. Actually, I probably said it to her too….

The reality is that

I have to admit that … as a species … we’re lazy. We seek pleasure and don’t want to take responsibility for own well-being.

I was sitting in my hospital just yesterday next to one of the aides with a HUGE stomach (and at excruciatingly-high risk for a heart attack) vocalizing raptures over some sort of fast-fried food that he was eating. He even asked me, “ask me how I feel about this food!”

When I expressed concern for his stomach, he turned back to the food. And made some excuse like, “I haven’t eaten all day”.

Look … I’m a foodie too. And extremely busy. But I take the time to pack good food for myself (it doesn’t take that long … trust me). Cook in bulk and freeze stuff. And make salads in less than five minutes.

The easiest ... and most effective ... thing you can do for your health is to eat better. Put more fruits and vegetables in your life. And fermented foods ... and possibly Gluten Free and Dairy Free foods.Click To Tweet

And … DON’T WAIT UNTIL YOU ARE SICK!

The next thing … DON’T WAIT UNTIL YOU ARE REALLY SICK! I get several calls daily from those who are as sick as the people I outlined above.

And many more who COULD turn their lives around with diet and supplements. And don’t call back after I outline what I would do to help them.

OK … I know that the idea of Functional Medicine flies in the face of what’s normal today. But, unfortunately,

what's normal in medicine today may not be effective for what's actually currently ailing us.Click To Tweet

But Functional Medicine may. IF you catch the dysfunction early enough. It’s most likely too late for the people I described above. But not too late for you.

Hey … I deal with the fact that most insurance WON’T pay for this kind of treatment (it will if you’re lucky enough to have an HSA) on a daily basis. There’s a HUGE disconnect there. And I’ve often said that insurance pays for sickness … not wellness … medicine.

So … having to climb the steep mountain of a new paradigm in health consciousness PLUS scaling the cliff of paying for it yourself can deter MOST individuals.

But … I ask you … WHAT OTHER CHOICE DO YOU HAVE? Because … if you have leaky gut … or autoimmune diseases … you WILL get worse. Unfortunately, after almost 30 years of experience treating this stuff, I guarantee it.

Is it worth to you to find another answer for what ails you? And leave no cliff unscaled until you find that answer? 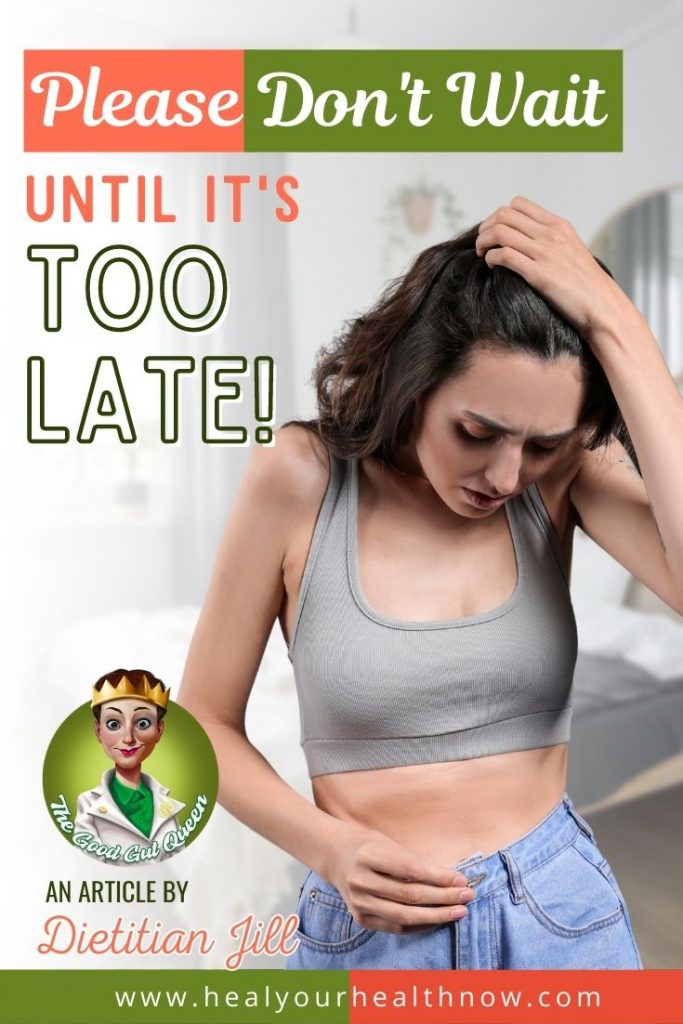