All the Gut Possibilities …

“Gut feeling”, “trust your gut”, “all disease starts in the gut”, “listen to your gut”, “follow your gut”,”go with your gut, “butterflies in your stomach”, “alles ist gut” … gut-saying possibilities are endless.  That’s why I’m writing this article … to explore all the gut possibilities … the science, the instinct, and the ultimate … immune support that buoys up all three.

One of my all-time fave musicals (in a past life, I was a musical actress) is Sondheim’s Sunday in the Park with George. The last line has always given ME butterflies … “White … a blank page or canvas … his favorite … so many possibilities”.

It’s the inspiration for this article. Being the ultimately curious gal that I am, I began to wonder about this HUGE connection we have with our gut. Being a root cause alternative health care practitioner … and The Good Gut Queen … I’ve always been fascinated about why our guts are so important in our lives.

But leaky gut isn’t addressed by the medical community. They consider the idea to be controversial. Some think it’s even silly. Why?

Number two … they say there’s not enough research. Which is shorthand for it doesn’t fit into their pokey way of acknowledging treatments as real.

But PubMed.com, the repository of most medical research for most things, lists 18,907 study citations for intestinal permeability (the scientific term for leaky gut), with studies exploding in the last few years … more than 1400 last year and more than 200 in the last six weeks alone. Compare that to 30 in all of 1966.

Number three … many … including professionals and lay persons alike … say there’s no way to test for leaky gut. I disagree. I test for it every day. And, although there’s no test that will tell you exactly where it came from, there aren’t any medical tests that can do that either.

Last  … number four … the concept of leaky gut is from a whole different mindset … one that looks at root cause instead slapping a label (a disease) on it. And giving pills for it.

So now let’s look at the actual science …

Ever wonder why you just KNOW that something is right? That little flutter in your middle that inspires you to feeling or action. Well … it might just be your second brain. Yes … that’s what I said … we have a second one!

Hidden in the walls of the digestive system, this gut-brain … or gut-brain axis as it’s most commonly called … might be the missing link between digestion, health, well-being, and even color your thoughts and emotions.

No … it can’t decide where to go for dinner tonight. But according to one of the ENS’s top researchers, Jay Pasricha, M.D., “Its main role is controlling digestion, from swallowing to the release of enzymes that break down food to the control of blood flow that helps with nutrient absorption to elimination,”

But researchers are finding that the ENS does a lot more than that. An imbalance in the gut (and most of us have leaky gut to some degree) can trigger depression, anxiety and other mood changes.

Which may explain why my psychiatric hospital is filled to capacity. And why a growing number of younger and younger people end up there with all sorts of disordered eating.

And it’s interesting that doctors are prescribing antidepressants and mind-body therapies for IBS. As Pasricha explains. “Psychological interventions like CBT (cognitive behavioral therapy) may also help to “improve communications” between the big brain and the brain in our gut.”

Obviously, there’s a lot more research to do. But it’s pretty much agreed among our pokey medical community that there’s definitely a there there.

The Gut Possibility Link to Instinct

As we can see, our gut-brains are indelibly linked to our emotions. As a matter of fact, author and philosopher, Johann Wolfgang von Goethe believed that the gut was the “seat of all human emotions”.

Our emotions seem to be influenced by changes in gut microbiota and permeability.  So it just makes sense that our instincts … which are also influenced by our emotions … are a by-product of where our guts are at.

A 2005 research study in the Journal of Complementary and Alternative Medicine is entitled “Gut feelings, intuition, and emotions: an exploratory study”. It had as its purpose “to investigate whether the gut feelings of one person, as measured with an electrogastrogram (EGG), respond to the emotions of a distant person”.

And concluded not only that this was so.  But that “Relationships commonly reported between gut feelings and intuitive hunches may share a common, poorly understood, perceptive origin”.

Not only that, 80-90% of the nerve fibers  of the vagus nerve (the longest nerve of the body which interfaces with the parasympathetic [rest-and-digest] control of the heart, lungs, and digestive tract) are responsible for constantly signaling the state of your viscera about to your brain in the form of gut feelings.

When I acted, my best work was when I got out of my head and just trusted. Once, I remember almost leaving my body and watching be perform below. Did my gut, instinct, and gut-brain take over? My intuition tells me so …

Your Immunity Supports all Three

Nature isn’t stupid. And it’s uncannily organized … even in the midst of what seems like chaos.

Is it just a coincidence that most of the immune system resides in the gut? I think not!

And that the gut and its link to the brain are like a feedback loop to the breadth and depth of our emotions. I ALSO think not!

And that stress and lack of self-care in its many aspects lay waste to your gut and … with it … your immune system, intuition, and emotions. And make you then more susceptible to both mental and physical maladies? Well … you know what my answer will be …

And, at some point, cause it to go a bit nuts and attack your own tissues. But … because of the diagnosis medical model, as one recent study said, we’ve looked at these things … stress, gut, immunity, brain … all individually.

So it’s time now … possibly in light of all this … that we begin to see everything as interconnected. As the same study encouraged an, “understanding [of] the important role the gut microbiome plays in the modulation of social and affective behaviors, as well as some of the intricate mechanisms by which the microbiome may be communicating with the brain and immune system”.

I think that says it all …

There are receptors to these molecules in your immune system, in your gut and in your heart. So when you say, ‘I have a gut feeling’ or ‘my heart is sad’ or ‘I am bursting with joy,’ you’re not speaking metaphorically. You’re speaking literally. ~ Deepak Chopra 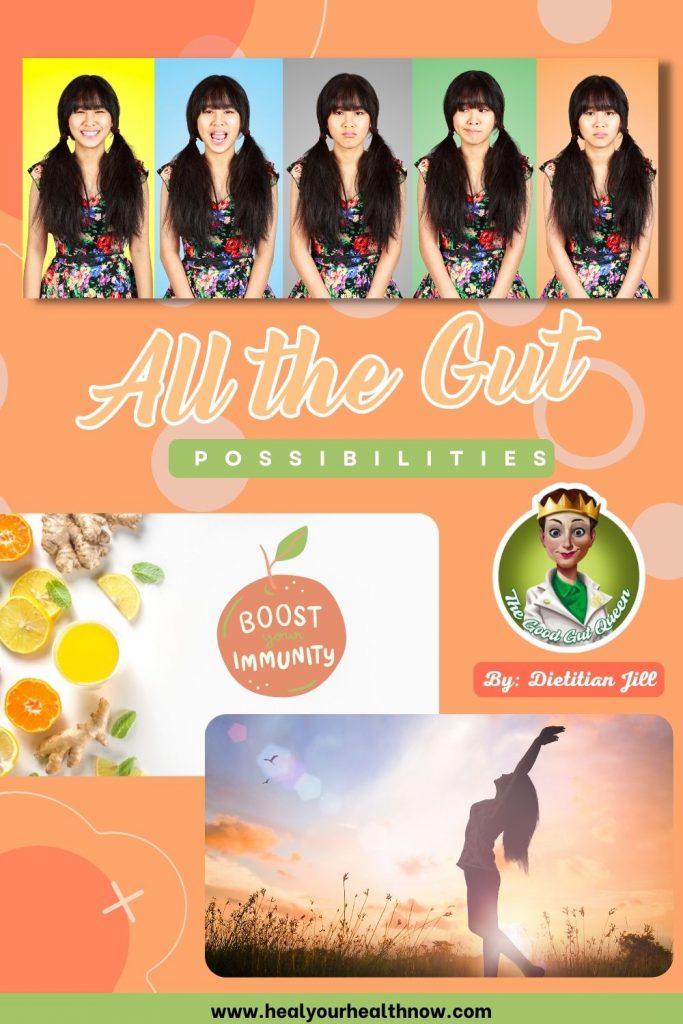