Is Our Food Poisoned? 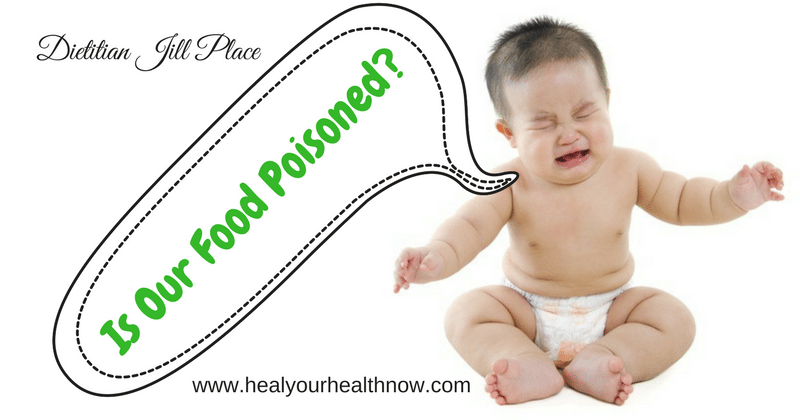 I feel like I’ve been transported back to the ‘90’s when tobacco executives swore that smoking wasn’t addictive.  Oh … wait … didn’t Trump also swear that “everyone” would have “cheap health care immediately”?  Wasn’t it just last week that this lie also went down in flames.

Last week I also learned that fellow dietitians are employed by Monsanto to tout the safety of the toxic, cancer-causing products they purvey.  These dietitians actually did a session communicating exactly that to their peers at the last RD conference.  Not only that, the New York Times reported that recently unsealed documents revealed that the company had ghostwritten research about glyphosate and later hired academics who would claim to have authored the research papers.  Of course, Monsanto is denying all this. And the dietitians also seem to be shrouding their affiliation with Monsanto too.

But we do know for sure that dietitians are employed to slap a legitimate shine on such tarnished products as Bayer multivitamins, Dove chocolate, Frito-Lay chips, Splenda and Nestle Tollhouse chocolate chip cookies.  And let’s not forget that the American Beverage Association, a soda industry lobbying group, also partners with dietitians.  As a matter of fact, last year the Academy of Nutrition and Dietetics was soundly trounced by the media for including these unhealthy products as well as many others in their exhibition.

So what’s this brouhaha all about? And why do dietitians lack transparency about their affiliation with Monsanto when ethically they should reveal it?  Well, it came out last week that:

Just to give you an idea of how outrageous these amounts are, independent research shows that probable harm to human health begins at really low levels of exposure – at only 0.1 ppb of glyphosate. Many foods were found to have over 1,000 times this amount! Well above what regulators throughout the world consider “safe”.

And the article from Health Nut News goes on to list many, many food products that have high levels of glyphosates, including a whopping 1125.3 ppb (parts per billion) in once-thought-of-as-healthy foods like Cheerios, and even 119.12 ppb in 365 (a Whole Foods house brand I buy often) crackers.

Here is why we all should be concerned about eating glyphosate:

• Independent research links glyphosate to cancer and it has been deemed a probable human carcinogen by the World Health Organization’s team of international cancer experts. The childhood cancer rate is steadily rising and experts say that they don’t know why. Why are they not taking a closer look at these facts?

• Research also indicates that glyphosate is an endocrine disruptor, which disrupts hormones and leads to reproductive problems, early onset puberty, obesity, diabetes, and some cancers. When it comes to endocrine disruptors, very small exposures are the most damaging, so “the dose makes the poison” mantra does not apply!

• Glyphosate is a broad-spectrum antibiotic killing the good bacteria in your gut. Poor gut health is linked to inflammation and a whole host of diseases. As GMOs laced with glyphosate are commonly fed to farm animals, this could very well be contributing to antibiotic-resistant bacteria.

• It binds with vital nutrients in the soil (like iron, calcium, manganese, zinc) and prevents plants for taking them up. Glyphosate is thereby making food less nutritious!

AND, when I researched my book, Gluten Free in 5 Days, I found that Roundup, which is sprayed on wheat fields to make all the grains ripen at the same time, may be the real culprit behind gluten intolerance … not the gluten at all!

I’m also wondering if this toxicity has led to the rampant rise of food sensitivities in our society.  The body can stand just so much toxicity before it begins to complain … in the form of Irritable Bowel Syndrome, Fibromyalgia, hormone and mood imbalances, and many other things.

Why … do you ask … is glyphosate also in large quantities in non-GMO and organic foods like 365 crackers … foods that supposedly are pesticide free?  Well, the sad fact is that this chemical has gone so mainstream that glyphosate has infiltrated every facet of our environment – our water, air, and soil.  I’m deeply concerned, as should you be, that we need to stop the use of these toxic chemicals … and others … NOW!  As well as stop the affiliations of dietitians and other health care practitioners with Monsanto and other companies that are poisoning us, or at least demand that they reveal their affiliations.

I am appalled by all of this.  And I hope you are too.

Leave Your Comments About Is Our Food Poisoned? Below

How do you feel now that you’ve real this bad news?  Did you know about Roundup?  Are you exhibiting symptoms of toxicity?