What the H- is Salicylate Sensitivity?

What the H- is salicylate sensitivity? It’s a problem that’s often overlooked by the medical community (keep reading if you don’t think that’s possible).

I didn’t even KNOW about salicylates until it tested positive for one of my very sick clients with food sensitivity testing. Addressing it through diet and with supplements enabled her to lose 40 pounds and regain her well-being; the last time I saw her she was glowing with health.

Not only that, she was so inspired by the process SHE BECAME A NUTRITIONIST!

I received this comment here just the other day …

At 64 years old I self diagnosed with salicylate intolerance. 71 now. Took a few weeks to determine that was the main culprit. … Took a long time of eating low salicylates, maybe a year?,… Can tell everyone, my life has turned round since then.

My current doctor accepts the fact that I have diagnosed and he keeps me healthy. The previous doctor didn’t want to hear about it. That was the last appointment. (GOOD FOR HER!)

Took about 2 weeks of research to, more or less, decide I would try a low SAL diet. Took another few week to test the theory. Sure, I over indulge at times, but within limits. Last time I had pizza was 4 to 5 years ago.

Learned my lesson. … I just happened to stumble across it. THANK GOD!

A heart-warming story. But not everyone is as lucky to find exactly the right regime as this lady. Read on!

Oh … about the pic above … the pineapple … that’s a high-salicylate food.  The guinea pig is just for show. And here’s my gift for you … MY low SAL diet!

So What ARE Salicylates?

Salicylic acid (salicylate) is produced by plants as part of their internal chemical defense against pathogens and environmental stress. The willow tree was one of the first places it was identified, and this ancient discovery still resonates today, in the form of aspirin.

The medical use of salicylate–rich preparations derived from willow bark as pain relievers and fever reducers–dates back thousands of years. Salicylate may also play a role in fighting cancer.

Many vegetables, fruits, herbs and spices are high in salicylate, which may be a contributing factor in why diets rich in plant foods are associated with lower risks for cancer.

However, estimates of dietary salicylate intake vary widely, from 0.4 to 200 mg/day, and it is unknown how great an effect salicylate might have on disease processes. Some ethnic cuisines rely heavily on plant foods and employ specific herbs and spices that are high in salicylate, while other cultural diets, including the standard Western diet, are generally lower in salicylate.

Some researchers suggest that the known protective effects of aspirin may have resulted in an emphasis on the importance of dietary salicylate, when other bioactive compounds in plant foods may play a greater role in supporting health.

What is Salicylate Sensitivity?

The article goes on to say that, even though salicylic acid may be protective for some, which is why baby aspirin is widely prescribed as heart-protective, there are others who are salicylate-sensitive. Such sensitivity may result in a wide range of symptoms such as asthma, hay fever, nasal polyps, GI problems, hives and other skin issues.

Salicylate, therefore, reduces inflammation in normal individuals, but in the sensitive can actually cause it. One of the ways to reduce reactions is to cut down on high-salicylate foods.

Among the foods highest in salicylate are fruits (especially berries and dried fruit), tea, canned and concentrated tomato products, and popular herb and spices, such as curry powder, paprika, turmeric, oregano and rosemary.

As is the case for foods that are high in histamine, people following healthful and nutritious diets may be consuming these salicylate-rich foods on a regular basis … particularly berries, which are suitable for low-carb, Paleo, and vegetarian diets alike, and turmeric, which has received a lot of attention for its health-promoting effects.

Individuals with undiagnosed salicylate sensitivity may be intentionally consuming large amounts of these foods, and be unknowingly stymying their efforts to achieve their best health.

How Can you Treat Salicylate Sensitivity?

I ALWAYS start with diet for EVERY person I treat. Because I’m a firm believer in the Functional Medicine concept of “Remove” … taking away what might be causing the problem in the first place.

Which usually starts with food. Unfortunately, we’re a lot more reactive to certain foods than we used to be even 10 years ago (don’t get me started!). So following some type of diet is the best (and cheapest) bet first.

If you think that salicylate sensitivity is a problem, trying the diet for a couple of weeks can possibly set you on the right track, So read it … plan it … and go!

If this IS the answer, then you might want to add …

Supplements can also help reduce salicylate sensitivity. When I started researching this, I found several lay forums and lots of professional information about salicylates.

And put my client on a regime of Milk Thistle, probiotics, fish oil, a multivitamin with minerals and N-acetylcysteine, vitamin D, digestive enzymes, Acetyl-L-carnitine, and D-ribose.

Others who take supplements state that one sensitivity is linked to a host of them (and … functionally speaking … why am I not surprised), including histamine and other amines, sulfates, gluten, and casein, favor additional things like Glucosamine Chondroitin and MSM.

Over the years … after working with many, many clients … I’ve refined my basic protocol. Now I’m giving it to you. Click the button below for instant access and to buy it. Not only that, I’m giving away MY EXCLUSIVE SALICYLATE SUPPLEMENT PROTOCOL … for free.

It’s not only the supplements I recommend after much trial and error that are only available to practitioners. It’s a step-by-step weekly plan to add supplements SLLLOOOWWWLY to prevent any negative effects.

Bodies don’t detox quickly … it’s a fact. So adding supplements to your diet little by little will ensure success. You deserve to be healthy. And this is the best way I know to get there.

It took a year. But my client, by avoiding both sensitive and high-salicylate foods and aspirin as well as religiously taking the supplements I recommended, began to get better and shed weight. I also suggested Epsom Salt baths twice a day to sop up impurities and provide much-needed Magnesium Sulfate.

A far cry from the initial suspicious looks I got from her parents as some alternative charlatan had just bilked them out of thousands of dollars. And she had actually gotten worse.

I hate hearing those stories as it casts aspersions upon those of us who just want you to be well. By any way possible.

As I said before, she is slim and healthy to this day. And was so inspired by the process SHE BECAME A NUTRITIONIST!

Bottom line …  salicylate sensitivity is a very real thing And can also be linked to other sensitivities to food, gluten, amines, sulfites, and histamines. As far as I’m concerned, testing for these sensitivities with several functional tests can mean the difference between lingering illness and health.

But I’m also cautioning you that the success story I told you at the beginning of this article is a rarity. Most people wander in the cyber wastelands for years … and never find an answer.

And … even if you have lots of money to get lots of opinions from some of the top Functional Medicine doctors in the United States like another client of mine … you may not be able to instantly heal either.

So I beg you … try the protocol I’ve laid out for you. If you DO suspect that you have salicylate sensitivity and think that you’re ready to heal it … do my program. It’ll only cost you a couple of hundred dollars (the diet is FREE) and may mean the WORLD to your health. Again … click the button.

But … on the other hand … if you DON’T get better … or are only partially down the path. Give me a jingle. 833-YOUHEAL. DON’T wander in the cyber wasteland one more day! 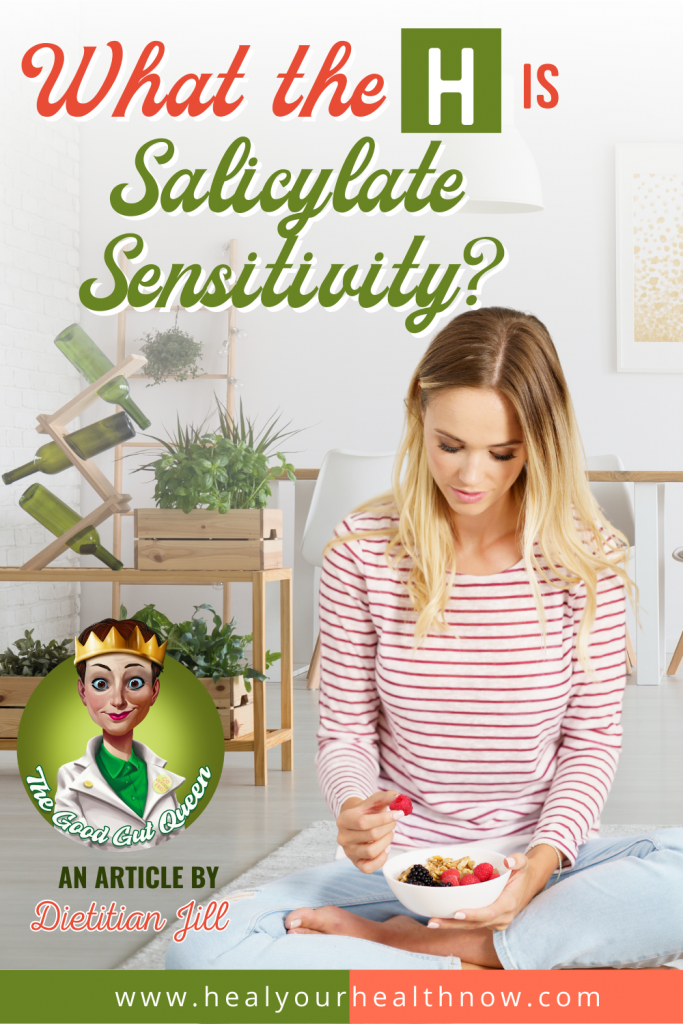