It’s ALL About Your Gut!

Oy Vey … I get calls, emails, texts (I just got one as I was typing this) EVERY SINGLE DAY … “I have (salicylate sensitivity, Lyme disease, histamine intolerance, brain fog, aches and pains, a bird on my head yadda yadda). What do I do?” Don’t they know IT’S ALL ABOUT YOUR GUT?

Well … maybe not the bird (how about Animal Control?). But I gotta say … as I’ve explained so many times ,,, most of what ails you begins in the gut.

Years ago, I went to a talk given by Anne Wilson Schaef, a genius psychotherapist who coined the term “codependent” and wrote the amazing bestseller, When Society Becomes an Addict … one of the books that changed my life. She managed to reduce a whole room of psychotherapists to a blubbering puddle.

During the talk, Schaef wrote the word “ADDICTION” in all caps on the board. and then drew lines beneath it to words like “drugs”, “gambling”, “eating disorders”, “alcohol”, “sex”, “codependence” and the like. And then erased the words beneath, leaving the word “ADDICTION”.

The whole crowd was totally blown away … they had never thought of it that way. And neither did I.

But when I began to do root cause medicine, I realized that leaky gut was most likely the root cause of most health issues. Yes, there are other causes of illness … like genetic mutations, toxic exposure, certain medications, nutrient deficiencies, viruses and the like.

But these can actually CAUSE leaky gut too. So … it’s actually a vicious cycle where leaky gut is the inevitable cause and outcome. Just like in addiction.

So here’s MY blackboard … 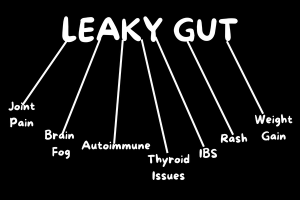 And here it is when the symptoms are erased …

Makes you think huh? But don’t take my word for it … here’s some actual research that may show you actual links between leaky gut and some of the maladies it causes …

When the pandemic was raging (seems like forever ago but I’m still wearing a mask half the day … albeit sequined and rainbow-hued), I often wondered why someone like a very fit (you have to be if you do musicals … even if you don’t dance like me) Broadway star in his early 40’s succumbed. And me … a not-so-fit (I’m being truthful here) person in her 70s just had a mild case.

It may not be the only reason (when it comes to bodies there never are). But a research article from the American Society of Microbiology all but affirmed for me that the worse the gut … the more you’re susceptible to a worse COVID outcome.

Even though my own gut has been pretty lousy since my 20s … I work on healing it all the time. And being healthy … eating well, reducing stress, and doing something I love.

The study made such sense to me that I even wrote an article about it called Poor Gut Health Means Worse COVID-19. In it, there’s a very convincing diagram that shows how the virus can “leak” into your bloodstream. And go to other organs to wreak more havoc in its path. Sneak lil’ bug-gers!

A strong pattern has emerged from patients with severe COVID-19, as many of them are either elderly or have certain underlying medical conditions which may be associated with an altered gut microbiota … Such dysbiosis of the gut microbiota may be associated with disrupted gut barrier integrity, which may allow SARS-CoV-2 to gain access to the otherwise well-protected enterocytes and to circulate and infect internal organs.

In other words … leaky gut may allow COVID to circulate in the bloodstream, affecting other organs and leading to worse outcomes.

There’s an interesting 2021 study in the journal Metabolites. It’s titled “Exploring the Link between Leaky-Gut-Related Markers and Metabolic Health in a Large Dutch Adult Population”.  And it pretty much proved the link between poor metabolic health and leaky gut.

It’s a large study of 500 individuals (if you’re reading research, check out the number of people being tested … if it’s 8 or 10, chuck it). And it showed that Leaky Gut Markers (LGMs) were good indicators for people at risk of a leaky gut and subsequent chronic inflammation linked to metabolic disorders.

The thing that intrigued me most about this article was that LGMs were most strongly associated with the inflammatory marker C-reactive protein (CRP). High CRP is now a risk factor for heart disease.

In a 2018 study published  in the journal Metabolic Syndrome and Related Disorders, researchers from the University of North Carolina at Chapel Hill evaluated data from 8,721 adults (BIIIG study group) from the 2009 to 2016 National Health and Nutrition Examination Survey (NHANES). They found that just 1 in 8 adults (about 12% of us) in the United States have optimal metabolic health.

Not only that, about 23 percent (a whopped QUARTER of us) of adults have metabolic syndrome. That’s when a person fails to meet at least three of five ideal measurements of those listed in the metabolic health definition above. Food for thought huh?

Don’t think that leaky gut has anything to do with the way you feel? Think again!

A 2019 article in Expert Review in Neurotherapeutics showed just that! It’s called “Microbiota-gut brain axis involvement in neuropsychiatric disorders”. And postulated “An increasing body of preclinical and clinical evidence has revealed that the gut microbial ecosystem can affect neuropsychiatric health”.

Evidence is now emerging that, through interactions with the gut-brain axis, the bidirectional communication system between the central nervous system and the gastrointestinal tract, the gut microbiome can also influence neural development, cognition and behaviour, with recent evidence that changes in behaviour alter gut microbiota composition, while modifications of the microbiome can induce depressive-like behaviours.

WHOA! We better be kind to our gut because it’ll make us feel bad! And vice versa … The study concluded … “gut microbes represent direct mediators of psychopathology.” Pretty definite declaration.

And Autism … the CDC states that 1 in 44 childen have it. And prevalence has almost QUADRUPLED in 20 years!

A study in the International Journal of Molcular Sciences entitled “The Human Gut Microbiome as a Potential Factor in Autism Spectrum Disorder” explores the link between leaky gut and autism.

And states that “GI symptoms, including abdominal pain, gastroesophageal reflux, flatulence, and constipation, have frequently been described to occur at rates of 9–84% in ASD children”. Is the link conclusively proven?

No … But they cited promising research that may point the way …

In 2019, Sharon and colleagues reported that germ-free (GF) mice display ASD-like behavior after being colonized with fecal microbiota from children with ASD … The team also found that the ASD group had a different abundance of Clostridiaceae, Lactobacillales, Enterobacteriaceae, and Bacteroides … They also observed that mice that were treated with gut microbiota from ASD patients displayed an alternative splicing of many ASD-related genes in the brain.

Translation … fecal transplants (a growing idea for humans … also not researched enough … yet) of feces from ASD (Autism Spectrum Disorder) children caused ASD-like behavior in mice. They also changed the microbiotia of these mice … AND ALSO CHANGED THEIR GENES! Exciting stuff huh?

I wish I had better news about this. But … upon reviewing the literature about this link … I found that there was little or none in this area. And no discernable treatment except to go on a low salicylate diet for awhile to see if it has an effect.

Yet most people who approach me almost daily about so-called salicylate sensitivity are sure they have it! I don’t know why they would think that except that the internet is FLOODED with articles about it.

Including my own … yes … I DID! I wrote Deconstructing the Low Salicylate Diet … where I continue my rant about the mal-researched fervor for this self-diagnosis ever further.

But statistics state that salicylates worsen or trigger irritable bowel in 69% of people with IBS. And the causes are many things that also cause leaky gut, like sugar, junk food, and stress. And it;s also most common is toxic exposure … which is also a leaky gut (and autoimmune) issue.

So … I can say with good confidence … that leaky gut DOES play a role in salicylate sensitivity. We just don’t know why and how much yet.

One very sick client I saw ages ago had a high salicylate reading on the LEAP MRT test I gave her. We cut out salicylates as well as other sensitive foods.

And I recommended some supplements for her too (I have a whole protocol in my Fullscript dispensary). Not only is she now … as they say …  the shining picture of health … and 40 pounds lighter … she’s now a nutritionist!

If the above research doesn’t sway you to believe that “It’s All About Your Gut” … I don’t know what will! Tending my gut has made me energetic, healthy, and still working at what I love in my LATE 70’s (WHOA … am I there already?) I don’t take any drugs (not even recreational ones). And my life is full. So can yours be!

Your gut is not Las Vegas. What happens in the gut does not stay in the gut.
~  Peter Kozlowski, MD 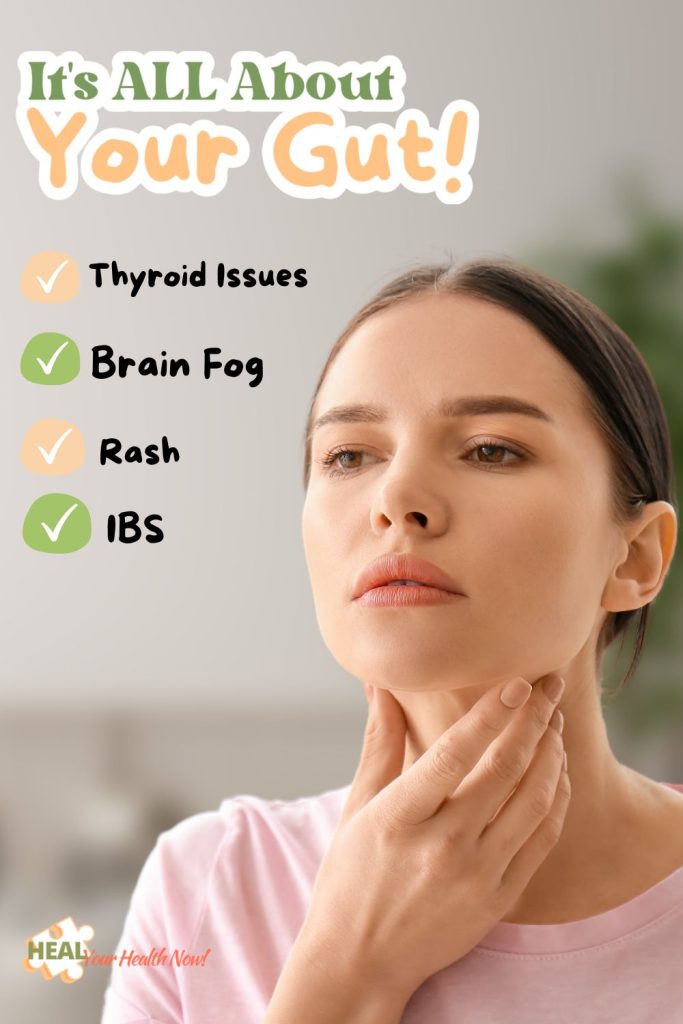