Confessions of an Exercise Dropout … 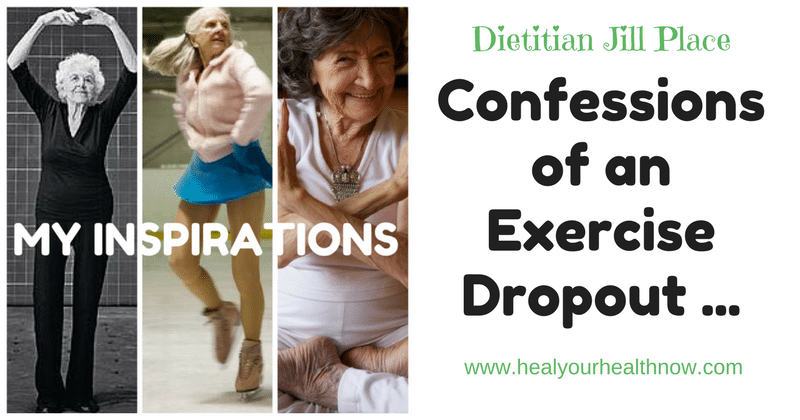 … and How I Dropped in Again!

I’ve gotta admit that, along with my history of overeating, I also have a lifelong tradition of being a vigorous exerciser.  And then quite regularly an exercise dropout.  This time, I’ve been sitting for over twenty years.  I’ve allowed myself to gain 50 pounds.  And haven’t really been able to maintain a regular exercise program since.  This is my longest inactive period, but dropping out has almost become my life’s work (FIRST A-AH!).

Now I’m 71 and I need to move to literally maintain movement in my life.  I talked with one of my nursing home clients with diabetes and cellulitis, an inflammatory condition of the legs, just yesterday.  She too has been sitting for a long time and will most likely never move much again.  On the other hand, check out the pics above … the woman on the left is 99 … the skater in the middle is 87 … and the woman sitting in a full lotus yoga position is 94…!  Aren’t they SPECTACULAR!  I want to be like THEM!

So I’m doing some soul-searching this week to accomplish that before, like my client, I can’t anymore.  And here’s some steps I came up with that might help you too!

STEP ONE:  TAKE A FEARLESS PERSONAL EXERCISE HISTORY.  OK … I think it’s absolutely vital to write your entire exercise history out longhand.  I warn you … this may be a lengthy process that may take several sittings.  Me … I like to write on the rocking bench on my front porch in my leather journal with colored-ink fountain pens while the wind tinkles through hanging chimes.  But whatever rings YOURS.

But whatever pens, paper, or venue you choose, write quickly without punctuation or a lot of thinking … this is called wind-mind writing.  A lot of thinking squelches the insights we’re hoping will percolate, so just scribble down whatever flows out.  Then put your writing down for a few hours … or a few days … pick it up again and circle your A-HA moments in whatever color gets you off the couch … mine is RED.

What you’re reading next is the first time I’ve done this exercise on exercise myself.  So hopefully I may end up with some radical A-HA’s (through this process I’ve already snagged one in the first paragraph … possibly the most important one).  I’ll share them with you if I do.

My bottom line with exercise is I’ve had one h … of a time reconciling what I actually do to move my body with the way I feel about moving it (A-HA #2).  Because most of my childhood and adolescence I was overweight … and sometimes very fat.  I just remember being horribly uncomfortable in my body.  Two things stick out for me like huge rosy razor thorns.  One is the way I felt in those gym suits with the elastic pantaloons … my legs were so big that the elastic bit into them.  I obviously wasn’t athletic so I always got picked last for teams … which also made me anxious and sad.  The other was wearing a size-16 maid-of-honor dress at my sister, Barbara’s, wedding in an era when large sizes weren’t yet attractive (A-HA #3).

And all that was weird, because I remember climbing trees, roller skating (with clip skates on black-and-white saddle shoes), and riding my 12-speed gold-and-black German racer bike (I was the only one on my block with one) all around my neighborhood when I was younger.  But I also remember that I was always chunky … and that it wasn’t OK in my day and age.  My sports-minded sister was skinny, gorgeous, and politically correct. I did, however, lose 50 pounds in my senior year and was suddenly popular … even got a stop-in-his-tracks look from my high-school crush. So I got the message pre-college that skinny was good, I wasn’t always, and I wasn’t naturally interested in sports like my sister (A-HA #4).

But I got to college somewhat skinny and, buoyed by the instant popularity my weight loss in high school brought, vowed to make friends and have fun.  I started dating, met my first love, and began a lifelong romance with my second … acting.  It was really easy to stay in shape because we did tons of walking then … I didn’t have to choose to do something I dreaded like in high school in the equally dreaded gym suit … it just happened naturally.  I also found that acting and the physical demands of staging burned lots of calories.

Which is also what happened when I returned to it in earnest five years later.  Method acting was very physical … long hours moving in a chair and getting to know my body.   I got to know it better by studying improvisation as an original Groundling … and then in children’s theatre … ohhh … children’s theatre.  I almost didn’t make the cut BECAUSE I wasn’t physical and it was.  So I started running … 2 miles up and down my hill.  And also working out with the company 2 hours 3 days a week, which expanded to five days when we started an intensely physical type of acting called Grotowski work.  Leaping and somersaulting over three people, one-shoulder stands, crawling and flying across the room, I ended up so much in my body and so fit that I actually was courted by a ROCKEFELLER and the whole California Arts Council at an arts conference.  I was at the high of my physical, creative, and spiritual power … and loving moving any way I could (A-HA #5).

As a matter of fact, I never considered what I was doing exercising … instead it was a means to an expressive end.  And I just realized that everything that came after that … even though I ran well into my 50’s and exercised religiously for 20 years after my children’s theatre experience, I never had as great a time moving my body as when I did it A) as a means to an end … for expression and B) it didn’t feel like exercise … it was instead a joy to both move my body and challenge myself with ever more difficult physical tasks (A-HA #7).

Check out my A-HA moments above … I had lots.  Also … I realize now (I’ve been skirting the issue for years and years) that my task before I can fully re-embrace exercise as a part of my life again is to finally OWN something that one of my acting students once called me out on.  A personal trainer … and obviously very physical himself … my student blurted out one day in class, “STOP saying you’re not physical (which has been my lifelong mantra, I’m sure, fueled by the biting pantaloons, sad maid-of-honor dress, and lifelong struggle with eating and weight); YOU’RE THE MOST PHYSICAL PERSON I KNOW!” (ULTIMATE A-HA … )

Leave Your Comments About Confessions of an Exercise Dropout …  Below

1 in 4 people don’t get enough exercise in our country.  Are you one of them?  If not, are you planning to do any exercise soon?  If you are, what’s your plan?