Celiac Disease (and Gluten Intolerance) May be Caused by a Virus 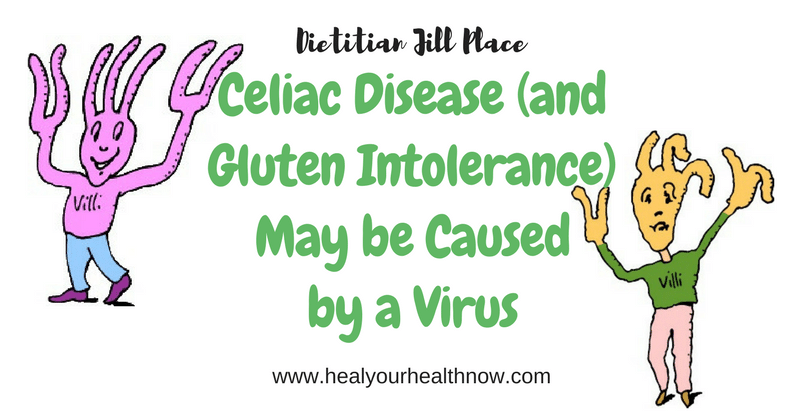 A hot-off-the-press study out just last Friday seemed to suggest that celiac disease … a serious genetic autoimmune disorder where the ingestion of gluten leads to damage in the small intestine … may have viral as well as genetic origins. Celiac disease is estimated to affect 1 in 100 people worldwide; two and a half million Americans are also walking around undiagnosed and at risk for long-term health complications.

These complications are mostly due to the damage to the villi, small fingerlike projections that line the small intestine, which promote nutrient absorption. Check out the cartoon version of this damage above.  When the villi get damaged, nutrients cannot be absorbed properly into the body. And the only treatment currently for celiac disease is a strict, gluten-free diet. Depending upon the damage, intestinal healing and an abatement of symptoms can start in a matter of weeks but total remission may take several years.  And may entail a whole gut-rebuilding supplement regime.

When I was researching my book, Gluten Free in 5 Days, I found that the incidence of celiac disease doubles every ten years.  And that up to 60% of Americans, according to several studies, have varying degrees of gluten intolerance.  So what’s up here?

One of my clients … someone in her 30’s … was just diagnosed.  Hopefully, we can reduce much of the inflammation she’s experiencing by identifying other sensitive foods and, along with gluten, avoiding them for a time.  As well as healing up her gut with supplements.  So this new research makes sense.  Her malady may not have been around all her life.  And may instead have been caused by this reovirus.

What’s a reovirus?  Well, it’s a family of common intestinal viruses, some of which have a protective immune effect.  But with one particular strain, when infection happens in the presence of a dietary antigen such as gluten, tolerance to the dietary antigen was lost.  An antigen is a substance which stimulates an immune response. When exposed to an antigen, the body views it as foreign material, and takes steps to neutralize it. Typically, the body accomplishes this by making antibodies, which are intended to defend the body from invasion by potentially dangerous substances.

Celiac disease patients exhibited more elevated levels of antibodies against reovirus than those without the autoimmune disease. And sometimes … antibodies become confused and attack normal tissue as if it were an invader, thus causing an autoimmune response. In other words, when exposed to this particular strain of reovirus, the immune system failed to work right in the presence of gluten, thus causing damage and intolerance.

These findings are huge!  Because, as I said, celiac disease has been previously thought of solely as a genetic disorder.  Now we may have some proof that there may be an outside cause.  A cause that may be manipulated and actually cured?

As a matter of fact, senior author Bana Jabri, M.D., director of research at the University of Chicago’s Celiac Disease Center, said in a university news release:

During the first year of life, the immune system is still maturing, so for a child with a particular genetic background, getting a particular virus at that time can leave a kind of scar that then has long-term consequences … That’s why we believe that once we have more studies, we may want to think about whether children at high risk of developing celiac disease should be vaccinated.

What about those of us who are gluten-challenged or, sadly, have full-blown celiac disease?  Could this be the beginning of a treatment and possibly a cure?  Or, at the very least, a better understanding of our very complicated immune system?  I hope so …

What do you think about this new research?  Are you concerned that you have gluten intolerance or celiac disease?  Why do you think that?