7 Signs That You Have Food Sensitivities

I wrote this article about 7 signs that you have food sensitivities some time ago.  But … now that I’m The Queen of Leaky Gut … it seems as if I wrote it yesterday.

So … eat it up.  And you might want to do some testing.  Sooner than later … check out MY FOODSTRONG PROGRAM.

You usually know that you have a food allergy … often from birth.  You eat … say … shrimp … and may instantly get a rash, have your eyes swell up or … even worse … can’t breathe.

Now, the operative word here is “instant”.  Because most allergic reactions are. Or damn near.

The Difference Between Food Allergies and Sensitivities

Food sensitivities, however, aren’t instant.  As a matter of fact, sensitivity reactions may be delayed for as much as three days.  That’s why I test instead of guessing.

It just makes more sense.  Because of the delayed nature of food sensitivity reactions, you can go crazy trying to figure out what foods may be making you feel like crap.

And feel like crap you will.  I’ve had clients come to me with a huge variety of symptoms, including the obvious Irritable Bowel Syndrome (I’ve had close to 100% success with those who strictly follow my advice for this), Fibromyalgia, and Migraines.

But have also discovered over the years that avoiding sensitive foods is great for a variety of conditions including mood, immune, autoimmune, and skin disorders.  I’ve even seen the blood sugars of out-of-control diabetics return to normal in a very short time.  And hormone imbalances balance.

When is Food Sensitivity Testing Appropriate?

But when is testing appropriate? Well, if you have any of the following, you might want to give it a try.  At the very least, you’ll finally know what may be causing the problem.

Many of my clients say that finally knowing is the best way to alleviate anxieties about what they’re eating.  As trying to figure out what foods actually offend has caused yet another issue … heightened stress … which alone can contribute to all of the problems below.

ONE … Unexplained Weight Gain or Loss

Food sensitivities monkey with the way insulin is used in the body. You probably think insulin just controls blood sugar.

But it isn’t called the “master hormone” for nothing.  Among other things, insulin also controls the way fat is stored. So when you have food sensitivities, you may store fat more easily and burn it less efficiently.

Therefore, you gain weight for no apparent reason.  You can also lose weight when you have …

These are all symptoms of maldigestion. Food sensitivities can strip the gut of its digestive capabilities and, with it, the immune system.

60-70% of the immune system resides within your digestive tract.  If it’s not working right, you not only can’t fight well against foreign invaders, but those invaders can end up in places they’re not supposed to be, wreaking havoc on your body.

When they do, the immune system goes berserk … attacking these invaders.  And can also mistake foods … especially gluten … as invaders because, chemically, they’re almost the same.  The name for this is “molecular mimicry”.

And … as you can imagine … the immune system … which resides just one cell below gut cells … becomes exhausted.  Lack of oral tolerance to certain foods result.

We call this entire problem “leaky gut”.  You can’t absorb your food well.  And your body begins to literally attack itself.

There are many other reasons for food cravings, but maldigestion (AKA leaky gut) and food sensitivities can be a major cause. According to JJ Virgin …

When you eat a food you’re sensitive to and it doesn’t digest well, the undigested bits permeate your gut and enter your circulation where they don’t belong. Antibodies rush to the scene, creating an immune response. ‘But it doesn’t just create enough antibodies for that one time,’ explains Virgin. ‘It anticipates another ‘attack.’ And when it has all these antibodies and nothing to break down, they crave it. And in turn, so do you.’

Again … another example of  molecular mimicry. Eventually, the immune system gets so confused, it sends the wrong signals anywhere.  And will attack anything.

Your skin is your biggest organ, so skin problems are literally your immune system raising the alarm that something’s wrong. And, since we have so much surface there, alarms can manifest anywhere in any way.

One of the most common symptoms of gluten sensitivity or celiac disease is tiny little eruptions commonly known as “chicken skin”.  And one of my biggest food sensitivity success stories was someone who had horrible hives and rashes over her entire body.

According to her testimonial is on the front page of my website, her skin problem was “75% cured in four weeks”.  Skin issues usually take longer to totally go away, but avoiding sensitive foods is a powerful way to literally stop them in their tracks.

Her doctor had first diagnosed her with the worst case of nickel allergy he had ever seen.  But I felt this problem could be treated alternatively.  I’m so glad I was right.

Now I also know that heavy metal toxicity is most likely caused by a parasite infestation.  Which I’ve also treated her for recently quite successfully. We both keep working on making her better and better.

Sensitive foods kick up histamines, chemicals that your body makes to get rid of something that’s bothering you, usually an allergen of some kind … they’re part of your body’s defense system.

But, as I’ve explained before, these reactions can go haywire and overreact.  Histamines inevitably cause inflammation, which can be felt in many places in the body.

Inflammation in the skin, as you’ve seen, can cause eruptions of many kinds.   But inflammation complexes also love to settle in the joints, where they can cause pain, stiffness, and, eventually, erosion of the bone.

Fatigue is a combination of not getting the nutrients you need because of maldigestion.  As well as the body combating inflammation, working hard to rid itself of unwanted immune complexes and perceived foreign invaders, and trying to heal itself all at the same time.

All this activity can be absolutely exhausting!  And can lead to more complex autoimmune problems like Chronic Fatigue Syndrome.

These may seem unrelated, but their underlying causes are all inflammation.  Studies have linked inflammation with depression.

And others have linked brain fog … having poor memory or inability to focus … to adrenal and thyroid insufficiency and Chronic Fatigue Syndrome, all of which are mostly caused by the same factors as inflammation.

Headaches, too, have been linked to inflammation, autoimmune diseases (which can be caused by inflammation), and food sensitivities (migraines can be totally alleviated by avoiding sensitive foods).  So I guess that you can call these three inflammation and resultant reactions of the brain.

I haven’t counted up all the times I’ve said “leaky gut” and “inflammation” in this article yet, but you’ve probably noticed that they’re considerable.  And the root cause of all these 7 issues … and more.

The bottom line is that identifying and avoiding sensitive foods, like Dorothy did when she threw the bucket of water on the Wicked Witch, can literally melt away inflammation and give your gut a chance to heal.  And who wouldn’t want that!

But … a word of caution … many things can cause these symptoms.  So … before you self-diagnose yourself, talk to a professional who can sort it out for you.  And, by all means, choose the treatment that you feel works best for you alone. 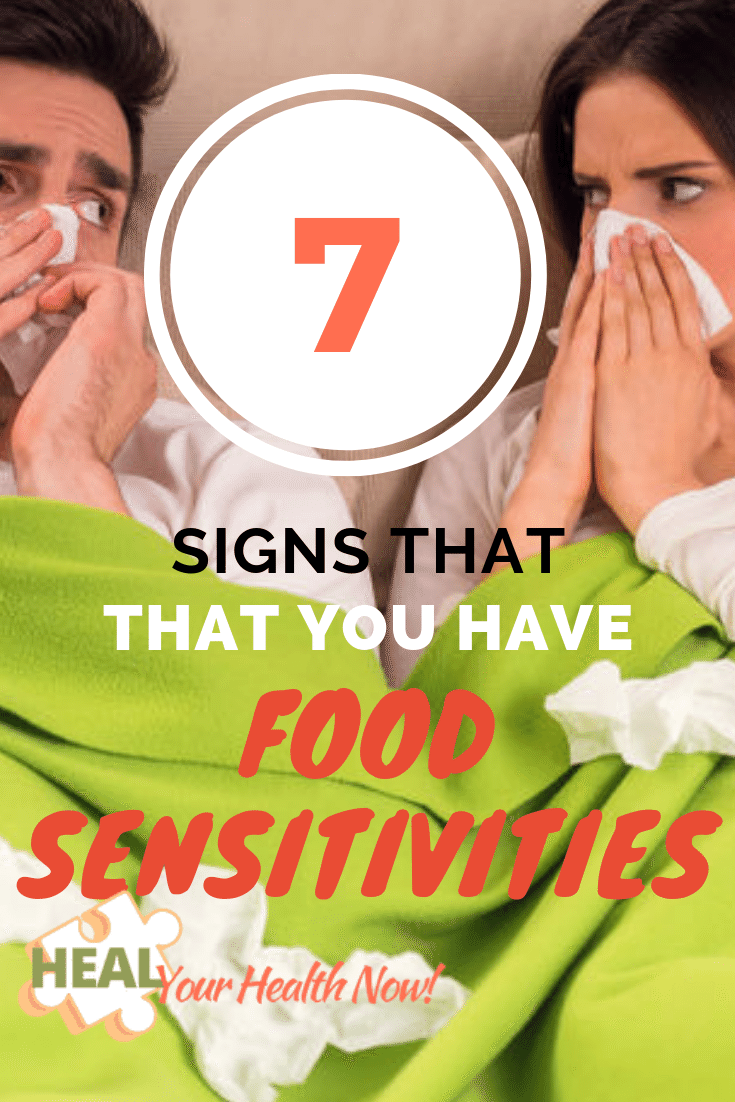