Four recent research studies have pretty much proven that there is a leaky gut-processed food connection (and, yes, fast food is in there too). In other words, most of the foods you probably choose if you eat a Standard American Diet (AKA as a SAD diet) can cause you great harm.

If you’ve seen the brilliant 2004 film, Super Size Me, you’ve watched Morgan Spurlock go from a healthy, normal-weight vegetarian to a 25-pounds heavier, heart disease-prone food addict in one month.

I especially liked the part where he threw up the food early on in the movie. Was his body telling him “NO!”? I think so!

The good thing is that burgeoning editorial like Spurlock’s has prompted more scientific research into why bodies destruct like his did. There were two published in The BMJ, one in the JAMA Internal Medicine, and one in the Journal of the American College of Nutrition that begin to hint at why they do.

And reinforce the idea that “You are what you eat!”. Or rather

More Research Points to the Microbiome

In three of the articles, scientists appear to think that processed food … with additives, sugar, and minimal fiber, may disturb the microbiome (AKA leaky gut) … the trillions of bacteria that line our intestines and colon. In other words, they’re the chicken nuggets,Big Gulps, Frappucinos … and many more things that I find people eating at nurse’s stations in all my facilities.

According to one of the articles, the definition of processed and ultraprocessed food is:

industrial formulations made entirely or mostly from substances extracted from foods (oils, fats, sugar, starch, and proteins), derived from food constituents (hydrogenated fats and modified starch), or synthesized in laboratories from food substrates or other organic sources (flavor enhancers, colors, and several food additives used to make the product hyper-palatable).

Makes you want to run right out to McDonald’s, doesn’t it? These factory-created poor excuses for nourishment substitute salt, sugar, and poor oils for real foods, i.e. something that actually has fiber, vitamins, minerals, and other needed nutrients.

All of this to supposedly make them tastier and last longer. Years ago, I took one of my Chinese-immigrant students to McDonalds. One bite of of a Big Mac made her nose wrinkle distastefully. Was she trying to tell us something?

Which brings us to the microbiome. Researchers generally agree that “Diet is the No. 1 influencer and determinant of our gut microbiome composition.” That’s a quote from Suzanne Devkota, director of microbiome research at the Cedars-Sinai F. Widjaja Foundation Inflammatory Bowel and Immunobiology Research Institute.

This recent research is a blessing for those of us who have believed for years that the more different types of bacteria in the gut, the better our health might be. And Devkota, among others, has shown that processed foods influence both these types and varieties in the gut.

Mice studies have shown that their microbiomes are markedly different when fed ultraprocessed foods versus those who ate regular foods. The total amount and diversity of the microbiome was much less in the former than those in the latter.

Which brings us to the studies I noted at the beginning of this article. The two in The BMJ published just last year showed the the more ultraprocessed foods people ate, the more likely they were to get sick, and even die, mainly from cardiovascular issues. The last-year JAMA article showed that people on similar diets not only ate more, they were at a higher risk of Type 2 Diabetes.

In a study recently published in the Journal of the American College of Nutrition, researchers at the UCSD School of Medicine studied the impact of a McDonald’s breakfast on a diverse group of healthy people, pre-diabetics, and those previously diagnosed with Type 2, or adult-onset, diabetes. And may have found the definitive connection between eating fast and processed foods and leaky gut.

Leaky gut is when the “tight junctions” between the cells of the small intestine of the gut become relaxed. Then things like toxins, mold, yeasts, and other pathogens invade your bloodstream and other places that they shouldn’t be. Read What IS Leaky Gut? if you want to know more about this probelm that’s now plaguing 80% of us.

The researchers focused on proteases … protein-dissolving enzymes that are normally found in the small intestine. When the gut is “leaky” … and the protective lining of the small intestine becomes compromised … these proteins can seep into the bloodstream.

And when these proteases “leak”, they continue to digest proteins, including the insulin receptors (little docks on each cell that help insulin grab glucose [sugar] and sail it into the cell) on cells in the bloodstream. As a result, they mess with the body’s ability to regulate glucose levels, leading to diabetes.

What the Study Found …

The study found that all categories of participants had an increase of proteases in the bloodstream after eating the McDonald’s meal. But an even more shocking statistic … and potential measurement for the “health” of a meal … the amount of proteases in the blood of healthy people was lower, and returned to normal more quickly. The highest protease levels were found in the diabetics, and pre-diabetics were in the middle.

Which makes a lot of sense as

diabetes can be defined as an inability of the body to regulate the digestion of glucose (AKA sugar, starch, milk, and fruit).Click To Tweet I’m very hopeful that this study will lead to more research that can replicate these findings. And jar the ultra-conservative medical community into acknowledging the existence of and potential harm from leaky gut.

What’s the solution? To heal up the digestive system, reclaim those “tight junctions”, and pump up the probiotics so that your gut isn’t continually poisoning you.  Another article named three supplements … glutamine, probiotics, and curcumin … that can help in this healing process.

Although still at the conceptual level, we feel that much supporting data can be found through the literature to suggest that early use of natural compounds, such as glutamine or curcumin (or a combination of both), and possible probiotics in the near future might represent a simple method to prevent the appearance or aggravation of many chronic pathologies.

I’ve used these supplements for years with positive results. I used glutamine, an amino acid that helps reconstruct gut lining, with my cancer patients to protect them from the ravages of chemotherapy.

It was so effective that, by the time I left my integrated clinic three years later, the research oncologist included it in his latest study model. It also quickly healed the gut of a 17-year-old boy with poor digestion and weight loss that wouldn’t do food sensitivity testing.

Curcumin, the active form of turmeric (the spice that makes curry that golden/orange-color), is a potent anti-inflammatory and immunomodulatory agent. Oh … did I mention that about 60-70% of the immune system resides in the gut? Break the gut down and you compromise the immune system too.

And then there’s probiotics. Commercials touting their praises flood the media. They guard those infamous “tight junctions” and keep them close. As well as populating the mucosal lining that protects them. And inhibiting the growth of pathogens and other bad bacteria.

Other Things to Heal Your Gut

Oh … and did I mention the benefits of an unprocessed diet? One full of non-GMO, organic fruits, vegetables, whole grains and beans, and organic meats, poultry, and fish? I know you’ve heard how great this diet is forever.

But it DOES ultimately prevent those problems that the articles poses. And it IS the first-line defense for most illness. Because the substances created by processing foods are minimal in it. And … guess what … you don’t even need supplements or other interventions. You can have your all-natural-food cake and eat it too!

Got leaky gut (80% of us do)? Want to get started on the road to healing?  You should always begin with diet. And I’ve got the very thing … it’s my BRAND-NEW IMMUNE BOOST DIET.

I’ve combined my HEAL YOUR GUT DIET … which you can get below … with some immune-supporting foods. Eat it up … FOR REAL! 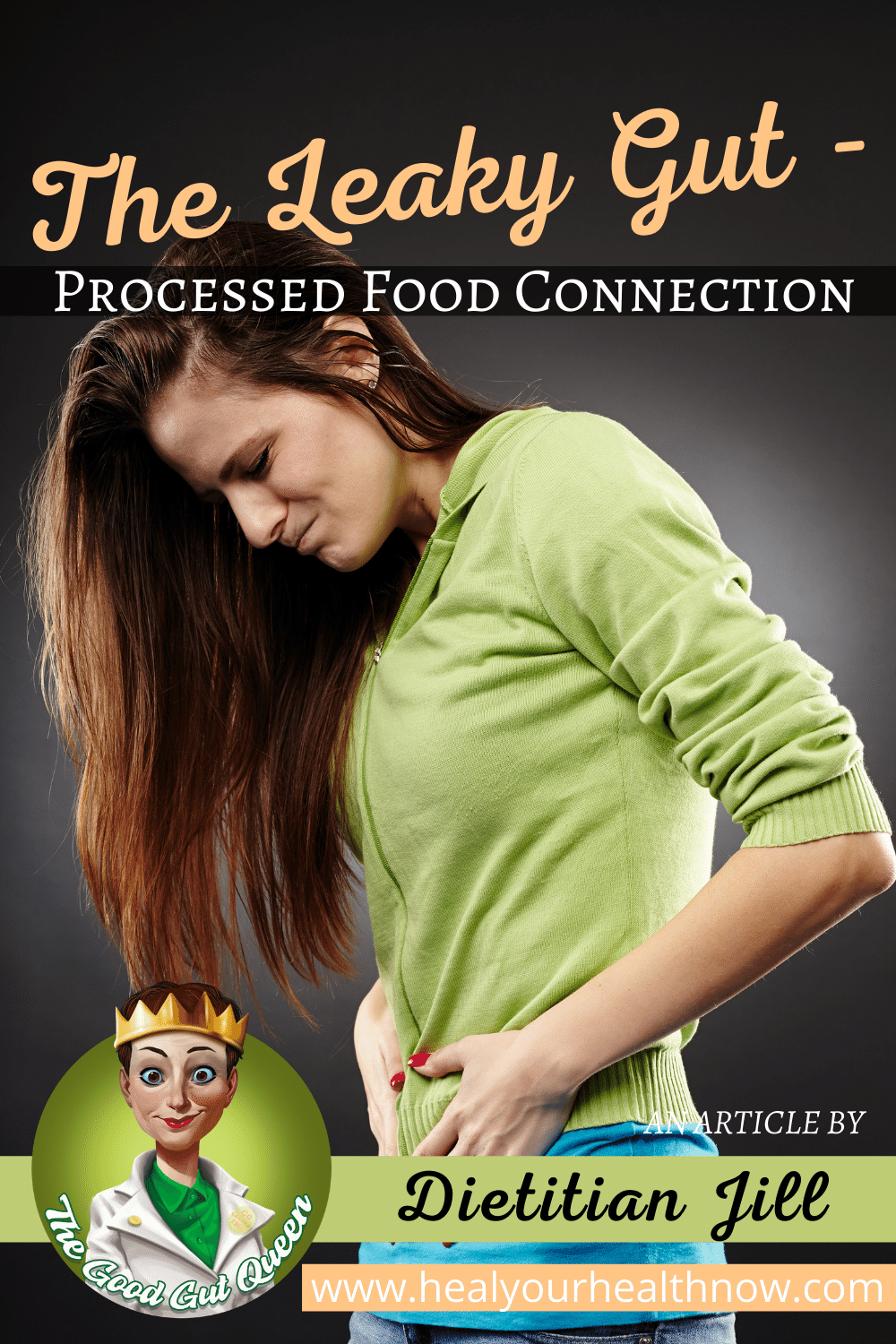