The 5 WORST Things to Say to People About their Weight

I wrote this some time ago but thoughtless people are just as relevant today as they were when I wrote it almost 5 years ago. Perhaps even more so …

I asked my new assistant, Alesia, who’s a large African-American woman, to tell me the WORST thing she’s ever heard about her weight. So she shared the phrase below with me. Which is probably one of the most awful things anyone could say to a large person … weightful or not.

I’ve learned from years of working with people to lose weight and implement positive lifestyle changes that it’s easier when you’re surrounded by supportive people. But I’ve also found that peers, friends, family, and even absolute strangers will say stupid sabotaging things … mostly out of downright idiocy or fear.

Fortunately, most of the pea-green vocal pustules that erupt from people’s mouths as if they were possessed are unconscious … they usually have no idea that they’re so offensive. Here are five actually-uttered awfuls for your perusal; let’s start with the one below:

“Oh You Don’t Look THAT Big” and Other Nightmares

AKA: “Boy, you’ve gained a lot of weight” “You gained so much I don’t recognize you”

WHY It Doesn’t Work: Calling attention to someone’s weight and then trying to “minimize” it is both unhelpful and downright hurtful. Most overweight people are unhappy with their bodies and possibly also into self-loathing thoughts and behaviors; this type of comment can only make them worse.

What DOES: Skip this kind of comment altogether; it’s totally counterproductive.

AKA: “Don’t eat that!” “Your doctor says you shouldn’t eat fat/simple carbs/sugar/etc.” “You don’t really want that.”

WHY It Doesn’t Work: Depriving someone, hiding food, shaming, or otherwise monitoring his or her diet is controlling. Only the person who is eating has the power of choice and amount.

What DOES: Address the feelings around the food, not the food or eating itself. And don’t make what you say food-specific. In other words, you might say something like, “Gee, you seem tired (overworked, stressed, yadda, yadda); is there something I can do to help?”

WHY It Doesn’t Work: Those who guilt others into eating tend to be insecure about their own weight or eating habits, or they feel threatened by a dieter’s self-improvement efforts. Most of us cook for others out of love … but when we goad them to eat the results, we’re doing it for ourselves.

The nurses at one of my nursing homes are always asking me if I ate. I know they only do it out of love but, even after years of recovery from my own eating issues, it just drives me crazy!

What DOES: If you’re the server, offer food without comment, either beforehand or when it’s refused. And if you’re the one who’s losing weight, just say “NO” instead of making excuses or explaining why you don’t want to eat something.

4. “I Hate to see you Depriving Yourself”

AKA: “You’re so brave to try to lose weight.” “Losing weight is too hard.”

WHY It Doesn’t Work: When I shared with my sister on an idyllic California central-coast trip for my 70th birthday that I was going to lose 50 pounds, she immediately retorted that it would be much too hard. Which resulted in our only fight in an otherwise loving 8 days.

Reminding a dieter of their daily struggles with their weight doesn’t tell them anything they don’t already know. It may piss them off too.

What DOES: Skip the empathy altogether. And resist the temptation to talk about the food.

Deprivation most likely will result in overeating so don’t remind someone how much they’re giving up. If you can’t resist saying something, at least say positive things about their food choices, like …”That salad looks yummy!”

AKA: “All sweets are bad” “Fatty foods are the worst things you can eat”

WHY It Doesn’t Work: Separating foods into “good” and “bad” categories can lead to overeating those “bad” foods and feeling guilty afterwards about them. Humans are wired that way; deep down, we don’t like to be told what to do or eat.

I can’t tell you how many eating-disordered individuals I’ve worked with who have started their battle with food by separating them into opposing armies.

What DOES: Just yesterday, one of my eating-disordered women said to me, “Aren’t sweets bad? I’m going to Six Flags tomorrow and we eat candy”. I assured her that making foods bad and then eating them sets you up for anxiety, failure, and self-loathing.

None of those help you lose weight. What does? Making ALL foods OK for you to eat and avoiding putting a “bad” label on anything frees you to eat the way you please. You can even eat less. What a concept!

These five are only a smattering of the many hair-brained things people say to others who are trying to change their lives. There are many others.

My advice if you’re the one on the receiving of these inane comments … make up your own things to say to yourself and others, like “Losing weight is totally doable and within my personal power”, “Everything I eat makes me thinner and healthier NOW”, or “Thanks for your comments but I’m making my own eating choices”.

Another thing … loved ones (and others) HATE to see you change. So they’ll unwittingly say things to sabotage you.

They don’t mean it … they’re either scared or jealous. Don’t let them get you down … realize that losing weight is a way to love and honor yourself. Go for it! 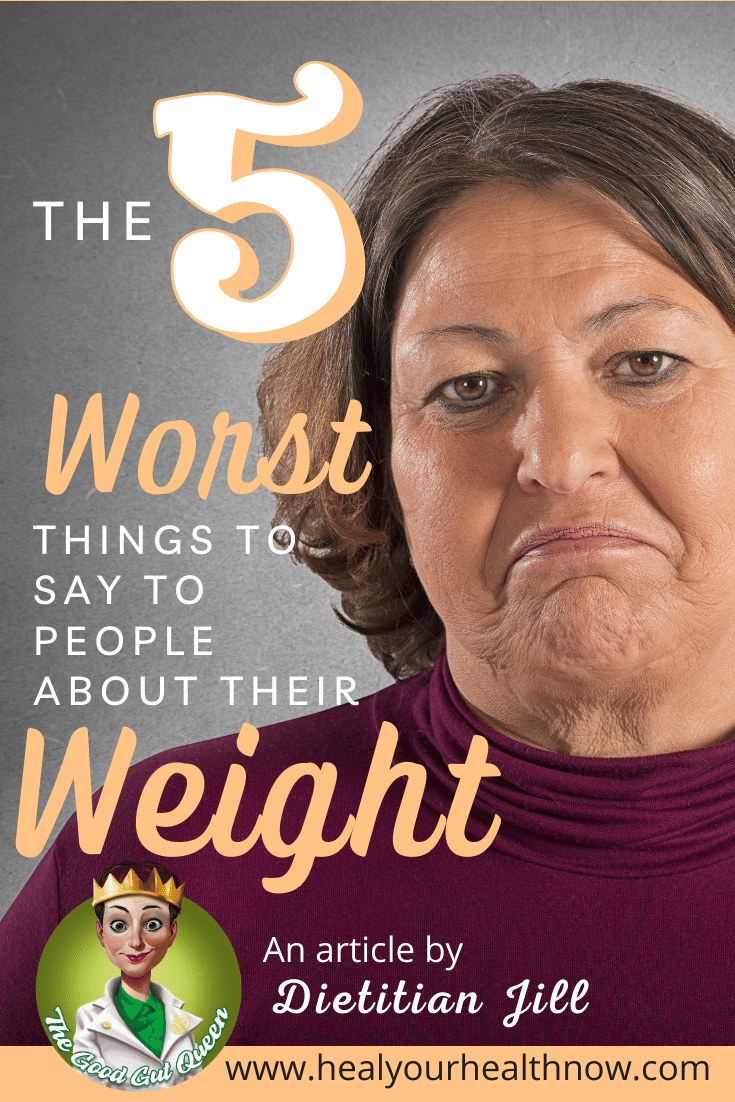