Do Antibiotics Cause Leaky Gut?

My alternative/functional medicine colleagues often say that the “Age of Antibiotics” is over.  Coulda fooled me … ANTIBIOTICS ARE now THE NUMBER ONE CAUSE OF LEAKY GUT! And let me tell you why …

According to a 2014 article in BMC Medicine, broad-spectrum antibiotic prescriptions have doubled from 2000 to 2010.  And the same researchers boded that 50% of those prescriptions are totally unnecessary.

Yes, antibiotics are great for bacterial infections.  But now they’re prescribed willy-nilly for just about everything that ails us.

My Own Antibiotic/Leaky Gut Story

I’ve told this one before but always feel the need to tell it again  Because I’ve spent years and years healing my leaky gut.  And it’s the reason I became a nutrition professional in the first place.

In my mid-twenties, I developed a massive infection from a birth control IUD.  Which resulted in increasing doses of antibiotics for over a year.

After all that, I was still hurting.  True to the medical model (when they couldn’t figure out what was wrong), the doctor threw up his hands and just about yelled “Uncle!”.  And proposed a hysterectomy.  I was 27!

I said, “NO!” … and still have all my parts to this day (thank GOD!).  Turned out that the doctor had misdiagnosed me in the long run.  I eventually didn’t have an infection but ended up with yet another affliction that had nothing to do with the IUD.

The Aftermath of All Those Antibiotics

The actual pain of the infection, plus the emotional pain of considering being unsexed (and childless) at 27 before I even considered going there, was just the tip of the iceberg.  I didn’t anticipate then a subsequent lifelong battle with leaky gut.

I had always had difficulty with constipation … even in my teens.  Looking back, I remember another time with flagrant antibiotics … when I had tonsillitis almost from the time I was born.

Gee … I never got this until now, but I was very ill as a small child (and was stuffed with food by my mom, which also set up a lifelong battle with weight).  The doctor wouldn’t take out my tonsils until I was two. Eradicating yet another line of defense against infection.

So I got antibiotics … and more in my twenties.  And where am I today after all that?  Still struggling.  I’m just about to begin a new regime I’ve created using different probiotics, prebiotics, digestive enzymes, and biofilm busters.  Will keep you posted.

The bottom line … I’ve had digestive problems since my twenties.  I’ve always had to take things to help me poop (sorry if I offend …). So I never know when I get up if I’ll go throughout the day feeling bloated or not. It’s a horrible feeling!

I’ve had to go gluten- and dairy-free because they’re still problematic. I also have other massive food sensitivities. And I’ve been seriously considering a fecal transplant to finally get my gut right.

And am tired of taking all these supplements to do well.  But I’m also so glad I started down the path to alternative healing.  Because god only knows where I’d be, at my age, without it.

What Actually Happens When You Take Antibiotics

Beloved Gluten-Free guru Tom O’Bryan calls antibiotics “The A-Bomb”.  Because the onslaught of an antibiotic pretty much destroys harmful but also every other helpful organism in your gut, or keeps them from multiplying in your microbiome. In other words, like the wildfires we have here in Southern California, antibiotics roar through your gut, pretty much destroying everything in their wake.

Don’t know what a microbiome is? Read my article, Polluting the Microbiome  to find out. When this delicate ecosystem is disrupted, it creates a bacterial imbalance.

But this condition also attracts others, like other types of bacteria, yeasts, and even parasites. When these repopulate your microbiome, damage to the lining of your intestines occurs, resulting in leaky gut.

Need a leaky gut refresher?  Here’s another article, What IS Leaky Gut?, to read. To compound the problem, over time the bad bacteria become resistant to the antibiotics, creating a systemic inflammation.

Researchers for a meta-analysis of 4,373 different studies found that this resistance can last for up to a year after taking them.  Which just adds fuel to a rampaging fire.

Other Problems with Antibiotics

The larger part of our exposure to antibiotics occurs through our food sources themselves.  Farmers spray their vegetables with them, and animals are given them too to make them fatter and stronger. And all of this flagrant use of antibiotics had flowed, along with pesticide residue, into the groundwater, further polluting our environment.

So healthy food becomes, for all practical purposes, unhealthy.  As it has within it a potential for inflammation. Most researchers have begrudgingly agreed that inflammation is the root cause of most of what ails us … including the big three … cancer, heart disease, and diabetes.

So the bottom line is that that which is supposed to nurture us can potentially kill us.

Another issue with the resistance caused by antibiotics is that they stimulate bacteria to grow biofilms.  Biofilms are a kind of polymer (like hard, unyielding plastic) that bacteria … who are often microscopic but definitely smart … grow to protect themselves.

As a result, the National Institutes of Health has postulated that it can take up to 100 times the standard antibiotic dose to penetrate a bacterium’s biofilm.  And the CDC has reported that antibiotic-resistant bacteria cause more than 23,000 deaths per year. (statistics culled from Tom O’Bryan’s book, The Autoimmune Fix).

Where Do We Go from Here?

Clearly, we’ve gotten ourselves into an almost-unfixable fix.  But there is a way out.

I can’t emphasize more the importance of finding an alternative practitioner to unravel the mess that may, as mine did, have started with antibiotics but ends with leaky gut … which leads to some or several types of autoimmunity … which can eventually lead to full-blown disease.

So you can start right now with The HEAL YOUR GUT DIET below.  That will quell the onslaught of “Bad Gut Guys” that have proliferated with antibiotics.  And then I’d advise finding someone to help with the rest.

People like you are everywhere! We had a gathering (and outside practice) for my Qigong teacher, who’s moving to Portland next week (Boo Hoo!).  I made my wonderful Chocolate No-Bake “Cheesecake”, which everyone devoured (you gotta try it … click the link to make this really easy Paleo treat).

I ended up talking to someone who was plagued with all sorts of problems.  I gave her my card.  I doubt if she’ll call.  Most people are waiting for a medical miracle that will never come.  More on that later …

Be part of the solution. Join The Good Gut Group at healyourhealthnow/goodgutgroup 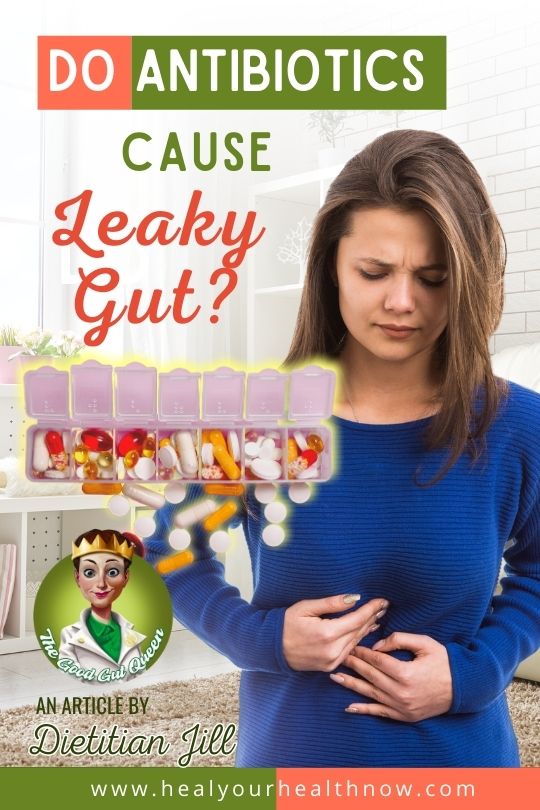