The Ritual of the Kitchen Table

There’s a little nook in my new kitchen. Where I put a tiny table this week. The retro-50’s dinette chairs are still in their delivery box, waiting to be put together with the new cordless screwdriver I bought yesterday.

So why am I going to so much trouble … and expense … to reclaim my kitchen table? Well … I seem to be intuitively driven to recreate that atmosphere for myself and my clients alike.

Where You Ate as a Kid Can Shape Your Food-Mood

You see, I grew up in a time when eating around the kitchen table was an important ritual. We never used the beautiful blonde Swedish-modern one in the dining room except on special occasions.

And since my mother was probably the worst cook I’ve ever known, those occasions were few and far between. But I do remember a white wrought-iron affair where the dog begged for scraps under it (and my mother constantly chastised my father for sneaking them).

We talked about our day in the evening and what we were going to do in the morning. Those were fond memories I’ve happily held until this day.

We moved into an apartment when I was 12. And I don’t remember the table after that. Or the family meals.

My sister was almost in college and off with her friends. And I began to closet-eat.

I do, however, recall family meals with my sister’s kids much later on when we were all visiting. That Swedish-modern table then became the ritual one and remained with my parents until both their deaths.

Those of us who have had the kitchen-table experience may be, like me, drawn to it. Or it may also be a foreign concept for many reasons.

I recently spoke to my chiropractor and friend, Josh Michael, about it. He said that the kitchen table was constantly laden with his mom’s research. Or his dad’s art projects.

The family meal, therefore, was relegated to sitting wherever, sometimes on the floor, and didn’t always encompass everyone. I’m not surprised … even though he always had a loving nuclear family unit, Josh comes from parents that are not only a generation ahead of mine but also creative, professional, and more open to alternative lifestyles to boot.

So you might want to ask yourself the following questions and consider the options I present. As reclaiming your early dining experiences may be a window into your unique eating behaviors.

What were YOUR Early Experiences with Eating?

Were there kitchen-table rules? Are you still subconsciously adhering to them? Or have you rebelled against them?

I grew up in the era of the clean plate. Especially since I was sickly as a small child and my sister did not eat well. So I like to say I ate for three … for me, my sister, and my mother’s anxiety.

My sister is still skinny and gorgeous at 76. And I’ve had a weight problem all my life. Only by noticing my behaviors and learning to eat to my hunger as well as comforting myself in other ways than eating have I been able to lose weight and keep it off.

Does the Kitchen Table …

… (or other early eating experiences) bring up negative feelings or experiences? I had a very interesting revelation with a long-ago client, who had actually fought her siblings for custody of her parent’s table.

Even though she was successful and the table was ensconced in her home, because of the bad feelings she now had about acquiring it, she just couldn’t bring herself to sit at it and eat. It affected her so deeply that she often overindulged and also ate standing up.

When we did some work about her fears and grief … and she allowed herself to mourn not only her parents but her strained relationship with her siblings … she was able to finally sit at the table and eat more normally.

If this scenario doesn’t illustrate how an emotionally-charged incident or string of events can trigger disordered eating, I don’t know what does. I also once had a bulimic client tell me about a time when she was very small and overate on berries she had hand-picked.

As a result, she threw up all over a white rug. That recall … which I call a “core image” (one that triggers a particular feeling or behavior) … can unconsciously color your eating lifestyle for years to come until you bring it into the light and into perspective.

Can you Eat at YOUR Table with No Distractions?

This is global advice that is often cited in weight loss programs. Yes … it’s a great idea to sit down alone or with your friends or family and just focus on the food or the experience of eating without reading, watching TV, or other distractions. And slowing down, putting your fork down, and really TASTING your food in a positive environment.

Most people these days don’t focus upon the experience of eating. I see so many scarfing up food at their desks or never putting down that burger … taking another bite before they’re through chewing.

There’s one guy that suggests blindfolding yourself to reconnect with the taste and fullness of food. But, even though his videos show people doing it in restaurants, I wouldn’t. And I’ve done a lot of things in restaurants that others won’t do, like asking the cook to make my burger with the Gluten-Free buns I bring.

But here’s what I suggest instead … whether you’re at the kitchen table, with people, or alone. Practice what I call Food-Mindfulness.

Take some time once you put food on the table or tray to take it in visually. Notice the color and texture … smell the aroma … enjoy the presentation. Then take a small bite and swirl the food around in your mouth … putting the fork down first.

Really taste it. Then chew it well before you swallow it and feel the food going down your throat. Take a moment before picking up your fork and taking the next bite.

Or eat the food differently. A lot of times just doing that adds to your eating awareness. I once had a client who cut down her chips-and-salsa eating 75% just by breaking the chips in half.

So whether you practice mindfulness, go back to eating at a table, or turn off the TV, being more aware of your Food-Story and your eating ritual will help you change your behavior if weight loss or better health is your goal.

Some Revealing Questions for You …

How did you eat what you were a kid? Are you eating the same way now? Or have your early eating experiences caused some problems that interfere with you current weight and wellness goals? 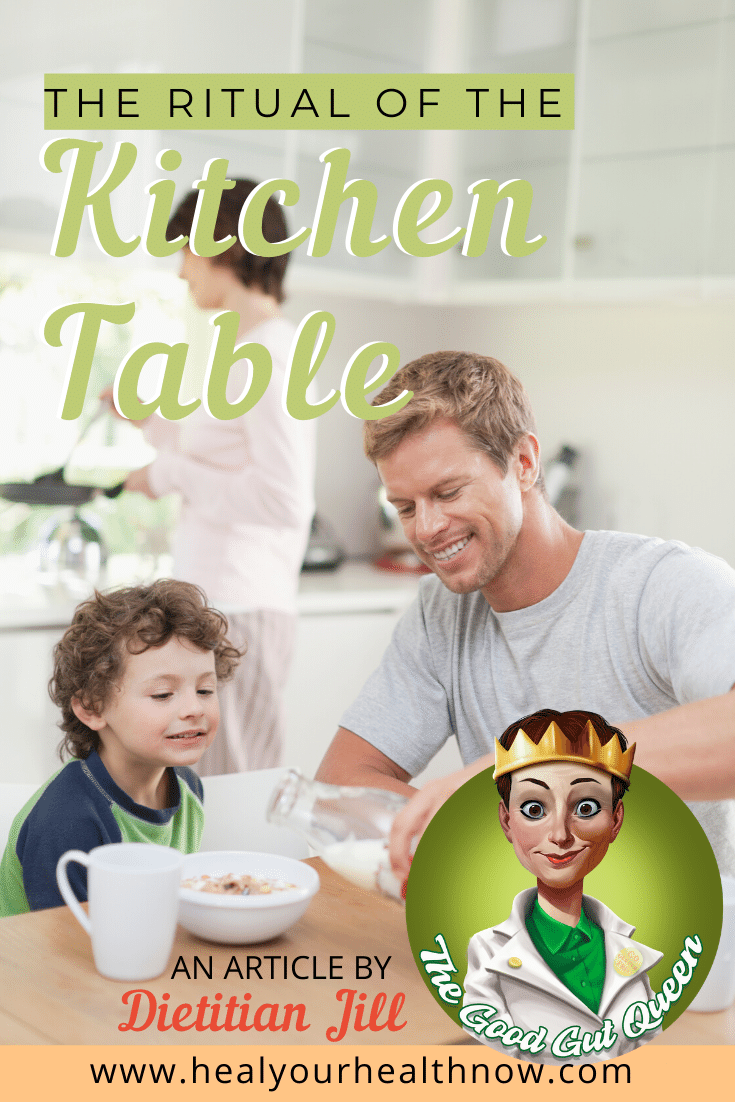