I just love, love, LOVE Bill Maher. When I watch him on HBO Friday nights, I laugh so hard that my cat, Romeo, leaves our mutual lounge on my day bed in disgust and ignores me for the rest of the night.

This usually occurs during Maher’s “New Rules” segment, where he pokes acerbic, irreverent, off-color fun at everything from Donald Trump to low-carb diets. The bed never shakes so much at any other time.

After many years of working with eating disordered and compulsive overeating individuals, I’ve come to believe that most of us have old rules about food. Rules that make food the enemy in one way or another.

The thing I hear most from clients is, “I have a problem with … (name of food or way they eat food)”. Aren’t you ready to rid yourselves of these problems once and for all? Don’t you think it’s time to make new food-rules?

For example, one of my clients is convinced that there are “good” and “bad” foods. This is a common belief … you may also feel this way.

Unfortunately, our sound-byte, hurry-up world is quick to pigeon-hole and simplify complex ideas like this. Research and the media haven’t helped either.

We all have a set of beliefs shaped by many things that rule our lives. And we’re usually not aware of them until they can be spotlighted and dissected.

You’re also probably not surprised that most of these beliefs … especially the ones about food … are formed very early in life. Usually about age 4 or 5 when we discover that food can soothe us in some way.

My client had these “good-bad” food rules imposed upon her very early in life, and then … when her mother went to work and paid her less attention … made up her own similar, more deeply-entrenched beliefs around food.

These beliefs enabled her to lose and gain 80 pounds at least three times in her life. And she just didn’t want to do that anymore.

To Get Lighter, Change Your Food Rules

Time for new rules? ABSOLUTELY! But before we could do that we had to find out her BELIEFS around this “good-bad” idea. It took several sessions to figure out the story around her “good-bad” foods.

But, once we did, she began to understand that the story wasn’t valid anymore in her life. And she wanted very much to change it.

Let’s find out yours, shall we? So get out a journal or other blank-page book, open it, date the page with your favorite pen, and begin to write quickly without punctuation or other syntactical considerations the answer to …

What are your food beliefs?

List at least three. Then write down how you think each of these beliefs were formed in your life. If you can, go waaaay back to when you were four or five years of age …

OK … let’s do me. I was sickly until about age two. And my sister has never eaten much. So my mother stuffed me from an early age. And my main food belief (and to tell you the truth I didn’t realize this until now!) is “I must be stuffed!”

WOW! What a revelation! I have to admit that whenever I’m the slightest bit stressed, I aim for whatever is available. And I can’t stop thinking about food until I eat it. If there are goodies around I go for them first.

Yesterday, armed with this knowledge, I ate a little something for breakfast, packed a great lunch of Gluten-Free baked ziti  I made the night before along with some yogurt, and for dinner had one soft taco with something sweet (gotta have it!) for dessert.

This is usually WAAAYY less than I eat. Just knowing my core food belief has enabled me to free myself of it. But the work has just begun. I now also have to …

Release the pain around your belief-story …

This may take a long time … it took 8 years for one of my clients. He did, however, eventually lose 80 pounds and has kept it off to this day.

But lots of pain here … as the youngest at his Weight Watcher’s meeting, with a very critical mother and an absentee father … food was his only respite from a life that didn’t notice him. And it was the only thing holding him back in an otherwise extraordinary ultra-professional career.

When he was able to release all that pain, and I literally became a loving surrogate-parent to help him do that in our weekly sessions, he made radical changes in the way he dealt with food and his entire life for that matter.

He rapidly lost the weight, which enabled him to finally happily marry and have children. In other words, the pain kept him “weighting” in both his career and his life!

Obviously, this idea will take much more time to explain than a mention in a blog. More on this later. One of our future blogs will be totally about this.

I LOVE affirmations. But I’m convinced that they don’t work until they’re (1) targeted to your belief-story and you can (2) release the pain around your belief-story. So my “NEW RULE” might be …

When you’re composing “NEW RULES” it’s important to 1) keep the statement positive (no won’ts or don’ts), 2) have it directly contradict your belief-story, 3) make it happen NOW, and, most important, 4) DON’T compose it until you deal with the pain around your belief-story.

Again … much too important an idea to deal with in a mere paragraph. In the meantime, are you willing to get yourself a journal or other blank-page book, something that you enjoy writing with, and to sit down for five minutes a day to write about your food beliefs?

Just write … don’t think … you’re on your way to “NEW RULES”! What are YOUR food-beliefs? When did they start? How were they formed? Are you still eating to your beliefs? 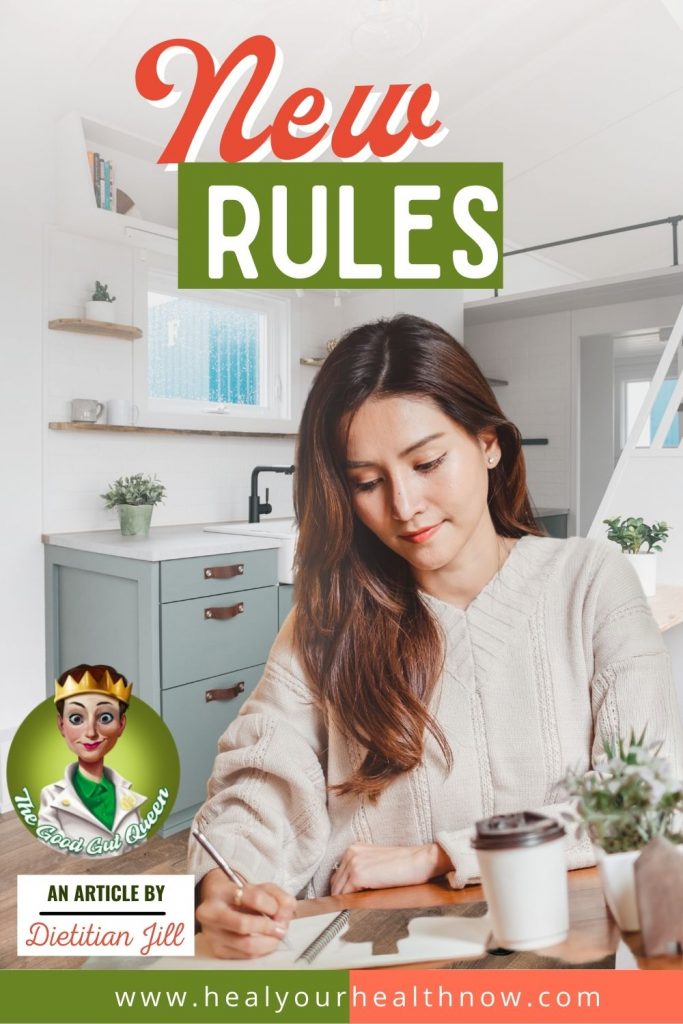