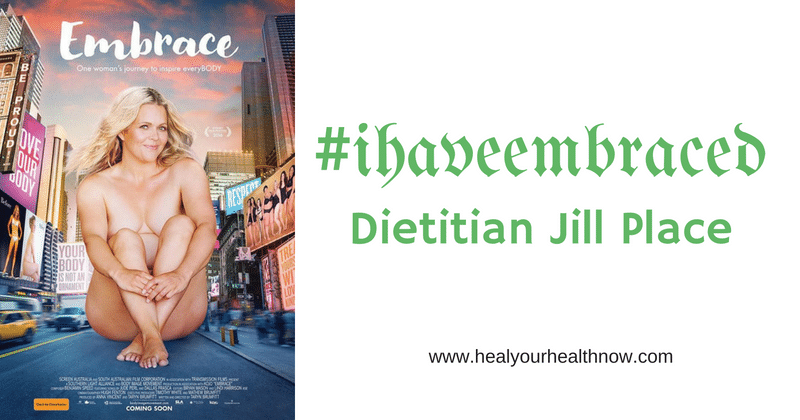 As an intuitive, I’ve always been psychic about places I should go and things I should go see. I knew I needed to go to this thing called “Real Woman, Real Beauty” maybe 10 or so years ago the day before … I called, paid, cancelled everything, and headed south to San Diego for this truly image-upending experience. I still play the album; unfortunately, I can’t find any more copies anywhere online.

Even now, I remember one of the therapists who conceived of the idea saying “I weigh 200 pounds so I wondered if I should appear here today.” It made me so sad … she helped create this uplifting program and still had deplorable doubts about her own image. THAT’S HOW DEEP-SEATED WOMEN’S BODY-LOATHING AND BODY-SHAMING IS!

The same thing happened when I learned of this screening of the film, “Embrace” last week. It’s been on my radar for some time, but something made me tell my assistant I was dropping her early at the train and driving an hour through rush hour traffic to Claremont … an unassuming university town about 20 miles from me.

The before-party was great … at some Spanish restaurant rife with terrific tapas and one of my favorite wines. I met some amazing women … mostly therapists … from the nearby eating disorder facilities. But the big blowout was yet to come … the film. Just like that long-ago program … I just intuitively knew I had to be there.

So here’s the “skinny” … an Australian woman named Taryn Brumfitt scandalized Facebook a few years ago by publishing what can only be described as a before-and-after picture in reverse. Brumfitt had deprived and drilled herself into bodybuilding shape for a competition. That was the “before” picture. Afterwards, she found that she couldn’t keep up her bruising regime and care for her husband and three children. So her “after” was tastefully naked, chunky, and happy. With lots of belly.

According to IMDB (the Internet Movie Database), that picture “was seen by more than 100 million people worldwide and sparked an international media frenzy. EMBRACE follows Taryn’s crusade as she explores the global issue of body loathing, inspiring us to change the way we feel about ourselves and think about our bodies”.

Taryn decided to make this documentary to splash the problem across a broader canvas, and funding magically appeared, much of it from celebrities. According to the website, www.bodyimagemovement.com, “she traverses the globe talking to experts, women in the street and well-known personalities about the alarming rates of body image issues that are seen in people of all body types. In her affable and effervescent style, Taryn bares all (literally) to explore the factors contributing to this problem and seeks to find solutions”.

By the end of the film, I was crying. And “embraced” a golden yoga goddess I had met a few hours before at the party. We couldn’t let go of each other.

I drove home in silence. A much easier drive now … and couldn’t sleep thinking about what I had just experienced. The very next day, I bought the book; it’s sitting here next to my morning sea-themed coffee mug complete with faux-coral handle.

The movie began a healing that I long longed for. My favorite moments … two one-breasted women who participated in the “Sydney Skinny” (a nude Australian swim) finding each other and celebrating their “one-ness”. An actress right before she won the European Oscar explaining how she wouldn’t buy into all the body-hype surrounding her profession. An ex-actress myself, I wondered how my career would have been different if I hadn’t focused so much upon my self-perceived flawed looks.

More memorable moments … a badly burned runner who seemed to have transcended all her injuries. And a bearded woman who explained “I keep my hair to show the world a different, confident, diverse, and strong image of a woman,”

But the most mind-blowing concept of all … Taryn said she did all this so that her daughter would not have to go through the same body-shaming we all had to face as women and, as a result, grow up loving and respecting her body. I began to fantasize … what would my life had been like if I hadn’t hated my thighs and size-6 size (weren’t we all supposed to be sculpted size 0’s?) Or starved and subsequently binged to fit into skinny jeans and even skinnier costumes. And, now at 71, still counted every wrinkle and rued my ever-growing girth. What would girls be like if they could grow to womanhood confident in their size no matter what it was?

So I’m announcing right now that I’M DONE! And I’m sure I’ll have much more to say about this journey later.

For now, like Taryn, let’s dream of a world where negative thoughts about bodies don’t exist. Visit the website or the Facebook page (Body Image Movement) or hashtag #Ihave embraced and embrace it. Then wipe your blotched and tarnished body-canvas and start afresh with a blank one. Think of all the possibilities …

If your dreams don’t scare you, they aren’t enough—Muhammed Ali

Leave Your Comments About #Ihaveembraced Below

In what ways do you hate your own body? What have you put it through to attain some unattainable idea of perfect beauty? How did you feel after your latest attempt at dieting or otherwise changing your body in some way?