I wrote this a year ago but am republishing it this week as the second installment in my “Good Gut Recipes” collection … foods that are vital for making a gut good. Eat it up!

Yeah … yeah … I’m admitting it … I’ve had constipation since my 20’s (And I’m 76 now … so it’s a very LOOONNNG time). That is, until I discovered fermented food. And I gotta tell you … it works like MAGIC!

I must admit that I missed my quaff yesterday. And am kinda uncomfortable today.

My go-to is coconut water kefir. I make it myself with an infusion of lemon balm leaf and lavender.  Add stevia (and some fresh mint) and it’s kinda like a fizzy lemonade.

SOUNDS like a lot of work but in reality it takes me about five minutes every three or four days to keep my culture up and running (I published an entire group of fermented food recipes in my “Recipes” section … just for you. Just click on the name to access my “Fermented Foods” recipes so far.)

When I  talk about fermented foods I often say they were a mistake … just like cooking. I’m sure at some point in history … just like someone accidentally dropped some meat in the fire and found out it tasted good … someone drank something fermented and found it to be great for their tummy.

The History of Fermented Foods

It’s a toss-up whether the first fermented foods were alcoholic beverages (and we know why THOSE stuck around) or dairy products. There are records that the milks of those camels along with goats, sheep, and cattle were naturally fermented as far back as 10,000 BC.

So it’s also likely that the first yogurts were made by slinging goat bags of milk over the backs of camels (there they are again!) in the heat of North Africa in temperatures around 110°F.

Then along came fermented beverages. Evidence of a fermented alcoholic beverage made from fruit, honey, and rice was found in China around 7000-6600 BC. And wine-making’s earliest origins were around 6000 BC in Georgia, the Caucasus region of Eurasia (bless them!).

But it wasn’t until 1910 that fermented foods were first considered as good for you. A Russian bacteriologist, Elie Metchnikoff, noted that Bulgarians’ average lifespans of 87 years were exceptional in the early 1900s.

Metchnikoff found that this was due to the fermented milk products they ate and drank … much more than other cultures. He even named a bacteria found in these fermented milks Bulgarian bacillus, and inspired much consumption of them by touting their many benefits for good health and longevity.

Fermentation, however, was long a method of food preservation. I lived in a 1920’s house that still had the cooler where the ice man would deliver a block of ice daily; in those days, very few items were stored in that tiny cooler space that I then used to keep my big platters.

Fermenting, then, provided a way to preserve foods without the need for refrigeration. While American farm wives in 1900 may not have been making kimchi or kombucha, the were certainly feeding their families fermented foods such as cheese, bread, beer, and vinegar.

Extensive research in the last 40 years (and a resultant HUGE preponderance of products) has confirmed the health benefits of taking friendly bacteria both in pills and as food. In 2013, fermented foods were reported to be the number one food trend!

What are Considered Fermented Foods?

What did I do? After the crying died down I ordered more … here’s the easy recipe.

5 Reasons to Add More Fermented Foods to Your Diet

Well … trillions of bacteria (and many, many different species) populate our microbiome … the colonies that occur in all parts of our bodies. If the vision is grossing you out right now, realize that they’re keeping you healthy. And YOU NEED THOSE “GOOD GUT GUYS”!

Our Standard Americian Diet (which I call S.A.D.) is almost totally lacking in those good bacteria. So we really need to consume them in some form.

You COULD take a pill. But, as a dietitian, I’m a firm believer in food first. And it’s so easy … a fork- (or cup-ful) a day keeps disease away … the hell with the apple!

Here are the best reasons to get ’em ….

And plenty of soluble fiber from foods like beans, oats and oranges promote even more fermentation in the gut. Which leads to developing the growth of different types … the more diversity, the healthier you will be.

You swallow bacteria that cause disease every day. But … don’t panic … the “Good Gut Guys” will come to your rescue!

Good bacteria create acidic fermentation that lowers your intestine’s pH, decreasing the chance that bad bacteria can survive. They also compete for food supply and space on your intestinal lining.

In addition, they secrete antibacterial stuff that kills off bad bacteria. Sold yet?

Good bacteria help produce many vitamins that are absolutely necessary for your good health. This includes vitamins B1, B2, B3, B5, B6, B12 and K … I’d fill a book explaining how vital they all are!

Fermented foods not only balance good and bad gut guys. But a less diverse gut microbiome is associated with many chronic diseases, such as obesity, asthma and chronic inflammatory conditions like Crohn’s, Inflammatory Bowel Disease, and the like.

I see this all the time when I’m doing functional testing with my clients. Lack of diversity can also lead to overgrowth of candida, bacteria, and parasites (yes … I said parasites) which can cause all sorts of things. For example, the preponderance of histamine intolerance and mast cell disorders (AND ulcers!) can be caused by H. pylori.

Antibiotics wipe out just about every bit of bacteria in your gut … both good AND bad. But they’re absolutely necessary sometimes … unfortunately.

Eating fermented foods may be able to restore your normal gut microbiome (I also recommend probiotics between when you’re actually on the antibiotics). The pills (buy the refrigerated one PULEESE) give you a lot more targeted good bacteria so your gut doesn’t get totally destroyed.

So be sure get your fermented foods in. And don’t forget to eat high-fiber and plant-based foods, which gut bacteria absolutely LOVE! 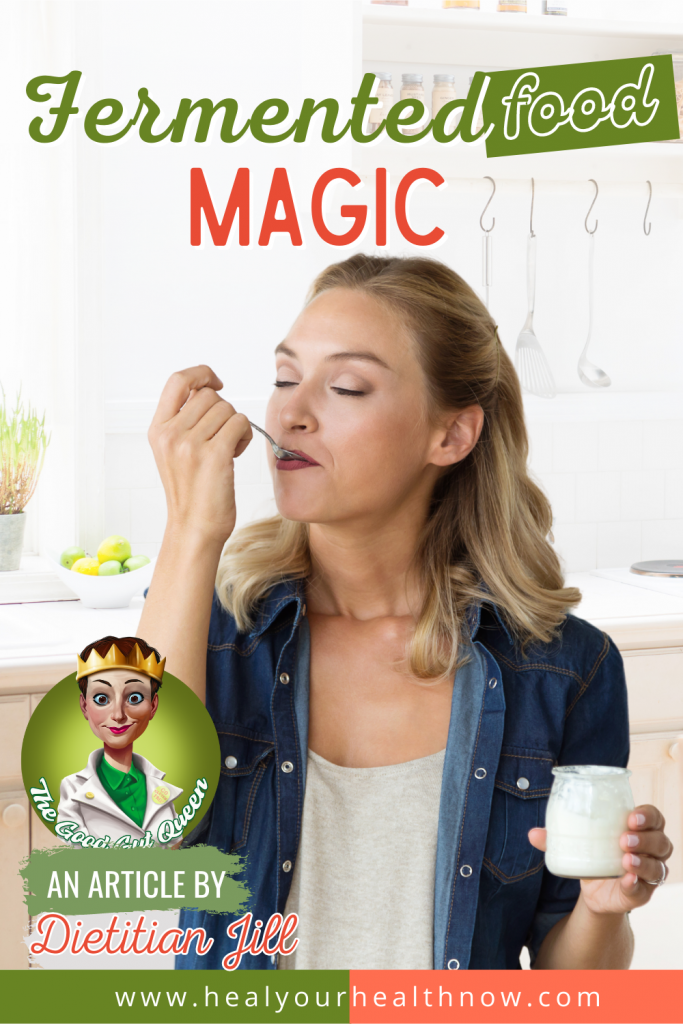