Get that Immunity Glow!

Today we’re going to talk about immunity diet and exercise.  We explored the mental and even spiritual (along with “body”, they form what I call the “Wellness Triad”) qualities of wellness in my last article, Awakening Immunity. Click here to read it.

Now … let’s get out of the muck with things that’ll make your “body” glow. There’s lots you can do, even with our still somewhat limited stock of stuff in markets. Can’t wait to go today to find out what’s there.

And true to the ideas in the Awakening Immunity article, I just surrendered to what we now all call “the new normal”. Visiting the market frequently to find out if the things I need are there. I was so grateful the other day when I found eggs for my Paleo Banana Bread ( recipe coming soon) that I almost didn’t recognize myself!

Switching gears, though, let’s focus on the “BODY” part of the Wellness Triad. When I’m talking about an “immunity glow” I’m picturing what you’d look like shining and well from the inside out. Here are some ideas and a special treat … my “Change Your Life” diet …

Staying hydrated helps your body naturally eliminate toxins and other bacteria that may cause illness.Click To TweetIt helps to oxygenate the blood and allows it to function well … bringing needed nutrients to all parts of the body.

Lots of water also boosts the production of lymph. The lymph fluid acts like a whole-body bacteria collector. It transports all this collected bacteria to the lymph nodes, which destroy them. Thus helping prevent (along with many other positive bodily functions) extremely serious diseases such as Coronavirus.

The main preventive for Coronavirus is washing your hands with soap and WATER. So it only makes sense that water can cleanse your insides too.

I’ve often said that adding some lemon/lemon juice to water helps with immunity. It produces alkaline pH, another defender of the body. The alkaline pH then joins forces with other aspects of immunity … adding more fire-power to the fight. As well as giving you a shot of vitamin C, another immune booster.

My favorite drink (with or without lemons) … distilled or purified water. I’ve been drinking it for over 30 years since my natural hygiene days. It has less (some companies say 99.5% less) impurities than “spring water” (still don’t know how much better this is than what comes out of the faucet) and considerably less than tap. Got my vote!

Of course … it’s difficult to get right now. And I can’t find any filters on Amazon until the middle of April. But do the best you can … drinking lots of water is most important.

OH …  an extra-added bonus … the brain also gets a boost with lots of water. As a result, it produces snooze-inducing chemicals like melatonin to help you sleep better.

You Can’t Pass this Up …

I just broke down yesterday and plunked down $300 for a reverse osmosis machine. I’d really encourage you to get one too as it pays for itself in six months (the way I drink water).

It’s $150 off and I love the fact that it sits on your kitchen counter (I can’t attach anything to my kitchen faucet). Not only that, the plastic pollution you’ll save is considerable.

Want to know more … go to the AquaTru website. I can hardly wait for mine to arrive!

I’m a lousy sleeper … always have been. But, since this pandemic hit, I’ve been making sure to get seven hours a night … and sometimes more.

Because, while you sleep, the immune system releases infection-fighting proteins called cytokines, which pummel infection and squash inflammation.  So, if you don’t get enough, you have less cytokines, which leaves you open to invasion from serious disease, viruses and bacteria alike.

Not only that, when you’re sleep-deprived, it’s hard to function, which causes all types of stress. Stress that can lead to a weakened immune system. Not getting enough sleep then becomes a vicious cycle of increased stress and decreased inflammation resources.

OK … before I explain what foods it might be great to eat … I want to again say (I say it often) that we’re healing systems not symptoms. And that takes awhile.

And if you’ve got some major immune problems (there are over 81 autoimmune diseases … and growing), disease states (like diabetes), or other chronic issues … it may take even longer. Many of my clients have been working on their issues for YEARS!

But that doesn’t mean that you can’t start down the path … actually … this would be a great time to do it! You’re home … you have more time … and I’ve noticed that that more produce is creeping back onto market shelves.

my first and foremost advice ... eat more fruits and vegetables.Click To TweetI know you’ve heard this forever. but plant-based diets are the best of the best when it comes to wellness.  They have a lot of fiber to quickly clean toxins out of your system.

Oh … and did I mention that plant-based diets have antiviral and antimicrobial properties. As well as zinc, folate, iron, selenium, copper, and vitamins A, C, E, B6, and B12 … the nutrients your immune system needs to do its job.

Not only that, the colors in fruits and vegetables contain naturally-occurring phytochemicals that have antibiotic, anti-cancer and  heart-healthy benefits and also reduce risk of several lifestyle diseases. The darker the color, the more the health benefit. That’s why we’re always told to eat a variety … a veritable rainbow … of color.

The easiest way I know to grab onto this rainbow is to include a salad with lots of fresh, colorful veggies (I like to go to the salad bar at Whole Foods and get a bunch of veggies that I like … then add bagged salad greens or a salad kit) and a couple of fresh fruits. I did that for dinner tonight … super simple …

Spices and herbs have been used as curatives since the beginning of time. Because they’re antiviral, antifungal and antimicrobial, spices like clove, oregano, thyme, cinnamon, and cumin prevent the growth of food-spoiling bacteria as well as having many other health benefits.

According to a review published in June 2017 in the International Journal of Molecular Sciences, spices can destroy food-spoiling bacteria such as Bacillus subtilis and Pseudomonas fluorescens, harmful fungi like Aspergillus flavus, and antibiotic-resistant microorganisms like Staphylococcus aureus.

So spices not only make food last longer and safer, but can also promote a lasting “immunity glow”. Spices such as cinnamon, for example, are well-researched as treatments for diabetes and Parkinson’s disease.

Turmeric has also been extensively researched for 50 years as safe and effective against numerous health conditions, including pro-inflammatory diseases such as arthritis. OH … and don’t forget the taste-tingling, multi-layered flavoring these spices impart to food.

I'm a HUGE advocate of a diet that heals your gut. Such a diet is Gluten Free (actually wheat-free) and Dairy FreeClick To Tweet with minimal fruit in the beginning so as not to feed any bacterial overgrowth that might be around.

The immune system’s job is to mop up what it considers foreign invaders. Which is all well and good with real invaders … toxins … molds …parasites … and bacteria.

But when food particles and other stuff that shouldn’t be there start to leak in, the immune system gets overwhelmed. It begins to mistake things like gluten for a threat.

It also attacks those molecules that are similar to gluten. That’s called molecular mimicry. All of that is the beginning of multiple food sensitivities. And further gut breakdown.

So it’s time to heal the gut once and for all. If it works … the immune system will work … pure and simple …

I’m sold on the diet below because it not only heals guts. It’s high in protein, which helps build and replenish immune cells. And lots of vegetables which … y’know …

I also love the collagen protein from Ancient Nutrition (Dr. Axe). Whip it up in a smoothie (here’s a great recipe) in the morning … it helps heal leaky gut and gives you that youthful glow. His 15%-OFF offer (use the code EXTRA 15 expires tonight. So hop to it!

More on supplements next week …

We all know that regular exercise is good for us. But would you do more if you found out that it lowers that risk of chronic disease as well as viral and bacterial infections? So says a 2018 article in Frontiers in Immunology.

Like everything though … you need to start slow. Bodies don’t do well when they’re forced to go beyond their capacities. That’s why diet change … too … is going to take some time.

There is some evidence that excess exercise may lower immune response. But that evidence is inconclusive. And there’s lots more that it gives immunity a boost. And keeps you healthy.

It’s even better if you do it outside. Because spending some time there supports positive mood as well as having multiple health benefits. You also get a good dose of vitamin D, which is one of the foundational nutrients for immunity.

What I’ve put forth in this article you probably already know. You’ve been bombarded with messages to eat more fruits and vegetables and to exercise more as long as you probably can remember.

But my hope is, now that we have a worldwide health crisis on our hands. And that our immune systems … because of widespread use of antibiotics … and even more widespread environmental toxins … aren’t what they used to be to combat it.

My hope is that you’ll take more notice about what you put into your mouth. It sometimes takes a crisis for us to realize that we’re doing it wrong.

So ditch the Strawberry Pop-Tarts and have the strawberries instead (the red color is cancer-preventive). And put more salad in your life with a variety of veggies… light on the dressing.

Get out of the house (we’re all there entirely too much … and the kids next door have cabin fever) and take a walk. Your body … and your immune system … will thank you for it.

NEXT WEEK: Supplements for Immunity 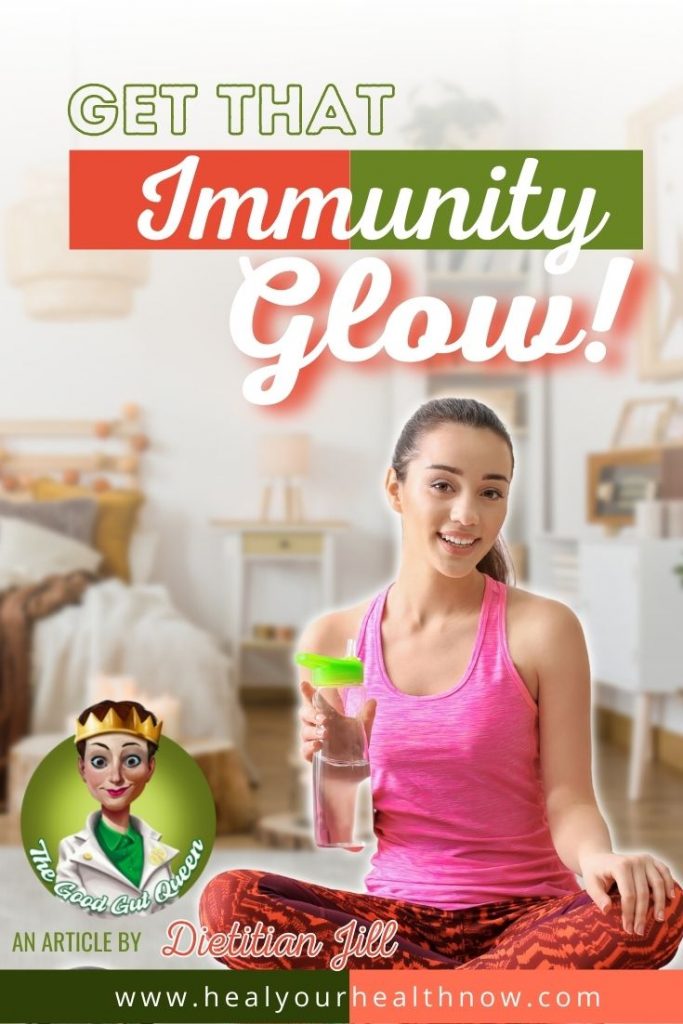