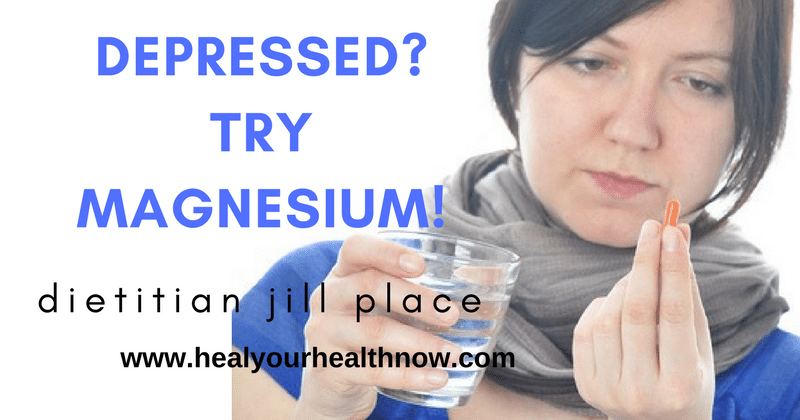 Magnesium is One of our Most Vital, Most Important Minerals

Occasionally, I will introduce you to particular supplements that strike my fancy. I began my dietitian career as “The Supplement Savvy RD” … I was known around the world in traditional and alternative medicine circles alike, was asked to write chapters in several textbooks, spoke everywhere, and spent three years in an integrated cancer clinic setting up supplement programs for cancer patients.

Supplements are an integral part of wellness regimes for many people. So if I can shine a little light on supplements for you, TERRIFIC! But the big spotlight I’d like to beam out is … if you want to take supplements, don’t trust the health food store clerk, Aunt Flo, or your dog, Fluff. Instead, ASK A PROFESSIONAL!

I absolutely love, love, LOVE Magnesium. When I was having constipation problems from IBS-C (not at this time due to the wonders of food sensitivity testing), Magnesium was a valued friend. It’s a terrific, organic way to combat constipation. But that’s just a small part of its overflowing benefits. Magnesium is necessary for more than 600 different chemical processes in the body. Every single one of our cells contains it because it’s a “cofactor” … something that helps biochemical actions occur, including converting food into energy.

Magnesium also plays a role in the creation of protein, the movement of our muscles and the regulation of our central nervous system. Specifically, magnesium helps our neurotransmitters, chemicals that cause the transfer of impulse from a nerve or muscle fiber or some other bodily structure, to another, therefore sending messages throughout our entire body. If you don’t have enough Magnesium in your body, you will begin have trouble performing many of these processes, causing a variety of symptoms, from heart problems to fatigue.

Adequate Magnesium stores also reduce Premenstrual Syndrome symptoms, protect against insulin resistance, thereby possibly preventing diabetes, reduce migraine intensity, battle inflammation, which is the cause of many maladies, help you sleep better, strengthen bones, and guard your heart. And recent research has just about proven that it also works great for depression.

A peer-reviewed June, 2017 article in PLOS.com entitled “Role of magnesium supplementation in the treatment of depression: A randomized clinical trial” explored that use of Magnesium for depression because …

Depression affects 350 million people worldwide and is predicted to be the leading cause of disease burden by 2030, based on disability-adjusted-life-year. Initial antidepressant trials of adequate dose and duration result in only about 50% of patients achieving remission. Even after the addition of other treatments, 20% still suffer from symptoms after 2 years. Non-pharmacologic approaches such as Cognitive Behavioral Therapy and lifestyle interventions require highly trained therapists and several weeks to months to achieve effectiveness. There is a great need for additional treatment options.

So the scientists did a six-week study using oral Magnesium Chloride (MgCl2), a readily-available over-the-counter Magnesium supplement, to see if it would improve the symptoms of mild to moderate depression in a primary care population. And here’s what they found out (forgive the clinical jargon) …

Consumption of 248 mg of elemental MgCl2 daily for 6 weeks improved depression scores by a statistically and clinically significant mean of 6 points and anxiety by over 4 points. This effect was not due to natural history, regression to the mean, or confounding, and was seen in a wide range of patients with varying ages, co-treatments, and severity of baseline symptoms. The similar effects seen in the univariate and multivariate models indicates that the potential confounders had little impact on the estimates of treatment effect.

As with other studies, the improvement in symptoms was seen within weeks (FYI … sometimes it takes a month or more for prescription anti-depressants to work … so much for the myth of the magic pill). The effect was somewhat diminished within 2 weeks of stopping supplementation, indicating relatively quick clearance as well. Although females are more likely to be diagnosed with depression, there was no difference in effect based on gender. The finding that high and low adherence subgroups had similar improvement suggests that a smaller dose may suffice with less risk for side effects and lower cost … magnesium supplements may be a fast, safe, and easily accessible alternative, or adjunct, to starting or increasing the dose of antidepressant medications (my emphasis).

This was the first definitive clinical trial exploring Magnesium and its effect upon depression. There have been a few others … but the researchers noted that the negative ones used poorly-absorbed Magnesium Oxide. I was heartened to read that these researchers were actually considering absorption as a factor. There have been other recent studies pooh-poohing the use of some supplements but the supplement researched was one that was also poorly absorbed, like the one-a-day form of multivitamins with minerals. There are even better-absorbed forms of Magnesium. But you’d have to do a ton of research or ask an expert to find them out … hint, hint.

In conclusion, Magnesium is one of those supplements that you might consider taking on a regular basis, especially if you have mild to moderate depression and want to keep your body working right. It’s dynamite to keep you regular too. I would know.

Leave Your Comments About Depressed? Try Magnesium! Below

What kinds of supplements do you take? Do they work for you? What do you do for depression?