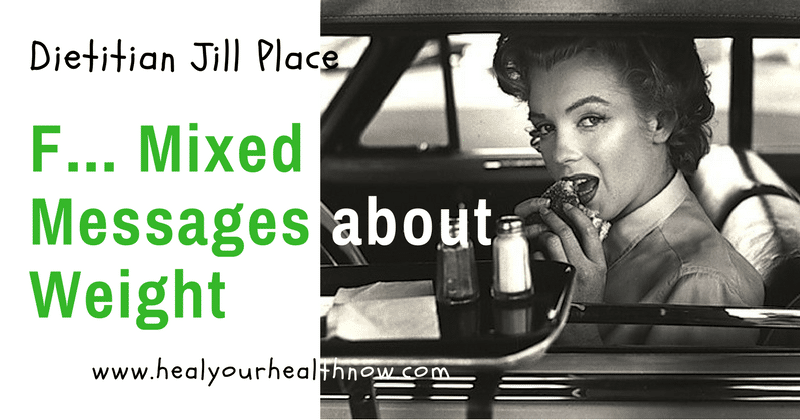 Dietitian Jill Gets Radical about Weight Hope and Hype

I just wanted to scream “RIGHT ON!” from the rooftops about a recent article by Jennifer Weiner in The New York Times entitled “Skinny Women Who Eat Cheeseburgers in Magazines”.  In it, Weiner debunks those relentless mixed messages about weight and diet that we’re constantly being bombarded with.  It’s enough to make me want to scarf up that 6000-calorie “Triple Bypass Burger” at the Heart Attack Grill in Las Vegas.  Complete with a whole basket of cheddar-soaked fries.

Here’s what she says …

Consider People Magazine’s “What I Eat in a Day” feature, which requires a star to submit his or her daily intake to the public eye and a nutritionist’s assessment.

Whether the subject’s a dancer, an actress or a TV personality, the diet is guaranteed to be frighteningly abstemious, long on whole grains, short on joy. Greek yogurt or a protein shake for breakfast, a salad or some lentils for lunch. Grilled salmon and blueberries (superfoods!) almost always show up somewhere, along with some kind of name-brand soup or shake (is the star compensated for its mention? We’ll never know!). Dessert — if it happens — is a single cookie. Or, perhaps, a square of artisanal chocolate. Never both.

The message: acquiring a body that isn’t a joke or a punch line, one that won’t earn your partner high fives for his broad-mindedness, requires endless sacrifice, perpetual denial.

Except everything changes when you switch to glossy magazines like Elle and W, GQ and Esquire. Over there, you can’t swing a weighted jump rope without hitting a star — sometimes the same one who’d claimed to subsist on poached eggs and wild salmon in People — proudly scarfing a cheeseburger or a plate of nachos.

Jennifer Lopez sips protein shakes in People but orders a mozzarella-and-prosciutto panini (no tomatoes, please!) in W. Miley Cyrus shared a gluten-free diet with People in 2012 but eats Cracker Barrel chicken and dumplings in Elle in 2015.

It’s such a notable trope — skinny starlet with big burger — that the folks who care about such things gave it a name: the Documented Instance of Public Eating, or the DIPE.

If that doesn’t make you mad, you’re not a woman and you don’t spend beaucoup time ruing about it, pinching places on it in the hopes that they would magically either disappear or turn to rippling muscle overnight, or all around loathing your body.  Sane voices like Health at Every Size (HAES) or Taryn Brumfitt’s Body Image Movement are tiny peeps in comparison to blaring multi-million-dollar TV ad campaigns and glossy magazine spreads.  And I didn’t realize how early this practice goes … case in point, this not-so-glossy pic of Marilyn Monroe eating a cheeseburger at a drive-in.  I so miss the car hops and intimate after-movie talks with a date complete with auto-attachable tray and assorted goodies.  By the way, you can buy the whole nostalgic-thing on Amazon … fake food included … for $117 and change.

So what’s a girl (and, in some cases, a boy) to do?  Well, you have to swim through the mélange of mixed messages, mouth tightly shut, to arrive at some sanity about yourself.  Me … I know that my 25-inch waist went south a looonnng time ago.  Me … I’d rather honor the body I have than worry about my ever-drooping frame like my mother did until the day she died.  I’d rather have a cheeseburger and fries (I DID last night … complete with Gluten-Free bun, Laura’s Lean Beef, Smoked Gouda [NOT lowfat], and crispy baked fries … although I DO frequent a local diner that has the real juicy and crunchy things … and I’m trying a vegetarian version on the grill tonight) than two beans on a leaf.  SOME days.

What am I saying?  The bottom line is that you have to make some peace with yourself the way you are instead of constantly craving a sylph-like frame that your bone structure can no way cram into.  You’ve got to value yourself much more than just an image in the mirror.  Because people love you for the way you are and the things you do, not the way you look.  The important people in your life, that is.

So here’s what I’d suggest … follow those sites I’ve listed above, watch movies such as “Embrace” and “America the Beautiful”, and by all means steer clear of mixed messages.  I used to work in an inpatient eating disorder program where one of the therapists would say about media missives that touted slimness, restriction, and body-shaming, “That’s so anorexic!”  I invite you to do the same.  And add a chuckle here and there for emphasis.

Yes, we love celebrities.  But I can’t stand the way they sell out for money;  they instead need to acquire a better moral compass as they’re affecting millions who want to be just like them.  It’s their JOB to look good … as well I remember when I was acting.  But it’s not your job to try to emulate them at the expense of your well-being … and possibly … your life.  After all, they give us mixed messages.  That alone should be a red flag that you shouldn’t buy what they’re selling.  Instead, applaud them in their movie, TV show, or sports stadium.  And don’t take whatever else they’re selling seriously.

Leave Your Comments About F … Mixed Messages about Weight Below

How do you feel about the mixed messages we get from all kinds of celebrities?  What do you do to shield yourself from them?