I originally wrote this article back in 2018 … a couple of years before the COVID pandemic … and more than ever I find myself asking this question …What’s WRONG with conventional medicine?

Because I’ve been through it myself … thinking I had COVID even before it was talked about. A mild case at 74 … never missed a day of work.

Lots of coughing and lack of taste and smell. Never tested positive. Never totally sequestered. Still OK to this day.

Relatively unscathed even though I was in the high risk group. I think … because of all the work I do on my gut and immune system.

And still … no one’s talking boosting immunity except my Functional Medicine community. And me.

For the first time since the 1960’s, American are now living shorter lives. Some attribute that statistic to the opioid epidemic, but chronic disease is also on the rise without a solution in sight.  And, as a result, health care costs are skyrocketing.

To truly add insult to these personal and financial injuries, a recent study showed that medical and medication errors were the third leading cause of death in the U.S. Am I wrong to assume from all this that traditional care is not only not working, but it might be killing us too?

At the very least, clients often come to me disillusioned with conventional medical treatment.  I do believe that many modern problems escape its current scope.

And downright demand that modern-day medicine be rethought to meet these problems.  Unfortunately, medical changes move very slowly with much laborious research … usually spanning 20 years or more.   But my hurting clients just can’t wait that long.

I find I’m always telling people that our environment is so toxic … and add to that our increasingly poor diets and predilection for the couch … that our immune systems are increasingly compromised.

So many of the problems I see today are due to this toxicity and compromise.  Our immune systems used to be strong to fight off things that are chronic health buzzwords today … candida, SIBO (small intestine bacterial overgrowth), histamine intolerance, and parasites among others.

As a matter of fact, the theory is that we all have parasites (what animal doesn’t!) and previously we have been able to mostly peacefully coexist.  But our over-toxic environment has now left us prey for them.

So we’re dealing with an overgrowth of normal stuff in our bodies that our immune systems have previously been able to keep in check.  Which leaves us sick and tired.  Literally.

Inflammation is Chronic and Widespread

So many medical problems today are due to the inflammation resulting from the all this toxicity plus this inability of our immune systems to fight off these invaders … a very different kind of dis-ease that was seen even 20 years ago.

For example, clients often come in with complaints of digestive disorders … as a matter of fact, this gut dis-ease is the most common reason that patients visit their doctors.   But basic physiological knowledge seems to fail physicians in this instance; they forget that the immune system resides within that very digestive system.

Instead, they give people a pill to stop the symptom.  Which sometimes upsets the digestive system and depletes the immune system even further.

In addition, our immune systems are so screwed up these days that they’re even attacking themselves; along with chronic disease, autoimmune disorders like Hashimoto’s, celiac, rheumatoid arthritis, and at least 80 more are markedly on the rise.  And a pill won’t solve these problems either.

Instead, you have to change the environment that created them in the first place … improve the diet, feed deficiencies, and reduce stress for starters.  People are talking about the “microbiome” more than ever … that’s the lining of the gut that houses the immune system and balances digestive processes.

But restoring it as well as creating lifestyle changes to do so takes time, coaching, and sometimes hand-holding.

With their time constraints (most schedule patients in 15-minute intervals), it’s difficult for doctors to do any of that.  I had to chuckle when the MD I work with thought I could coach lifestyle changes in the same amount of time that she saw patients.

Instead, my coaching takes at least an hour with consistent multi-daily virtual/text check-ins until the next appointment.  And conventional medicine appears to have been reduced to diagnosing diseases, then addressing symptoms with pills and other treatments.

If you have anything less than a full-blown diagnosable disease (which to me may mean it’s already too late to restore health) … digestive, overweight, fatigue issues among many others … you’re out of luck.  Doctors have no idea what to do with you.

In their defense, they’re just not trained to handle advice on diet, stress, or change.  Many of my clients tell me that doctors have told them to “live with it”, “eat less than 1200 calories”, or “just take an antacid”.

UGH!  I’m sure their patients are just going to run right out and do that because they said so.  GET REAL!

And I know it’s incomprehensible but some doctors still don’t believe that diet plays a major role in good health.  Despite the fact that studies have consistently shown that eating well may cut U.S. deaths from heart disease, stroke and type 2 diabetes by 45% to 90%.

Lately, I’ve noticed more lip service paid to the fact that doctors should know more about nutrition and other integrative practices.  Yet my clients often tell me that doctors laugh at them when they mention things like SIBO or supplements.

As a matter of fact, many cancer patients won’t tell their doctors they’re taking supplements for the same reason, sometimes to their detriment. So most doctors that I work with don’t begin to address diet.

Let alone other huge problems like stress, which I believe is just as important an issue.  Research has also shown that chronic stress is associated with the body losing its ability to regulate the inflammatory response; it’s even proven that emotional states such as shame can cause inflammation.

So where do we go from here?

I once worked in an integrated clinic with some of the most prestigious alternative practitioners around.  It was a truly the most fruitful, flourishing time of my life.

I was asked to write for textbooks, speak all over the world (I was even invited by my association … a rare honor), and heal people on top of it.  But the whole thing imploded due to internal issues too numerous to mention.  One of which was insurance reimbursement for all our services, which was spotty at best.

But I do think that the time has come for conventional medicine to open its mind to other avenues of treatment.  Especially NOW that we’re almost through COVID.

Because what needs to be treated today demands an overall approach that includes diet changes and (horror or horrors) nutritional supplements.  Because, as you can see, medical problems have changed.  And treatments haven’t changed fast enough to keep up with them.

I do believe that changing the way we eat and live can heal people.  But it’s not as lucrative as drugs.  It’s not covered by insurance.  And it takes a mindset change that’s almost heretical.

I’ve seen Jeffrey Bland, Functional Medicine founder and longtime colleague, explain JAMA articles from that perspective with totally opposite insights for which the study was intended.  It takes an open mind and an innate curiosity to see things from an alternative perspective.

So what do YOU think about the current state of conventional medicine?  Have you tried alternative treatments?  Would you like it if they were covered by insurance? 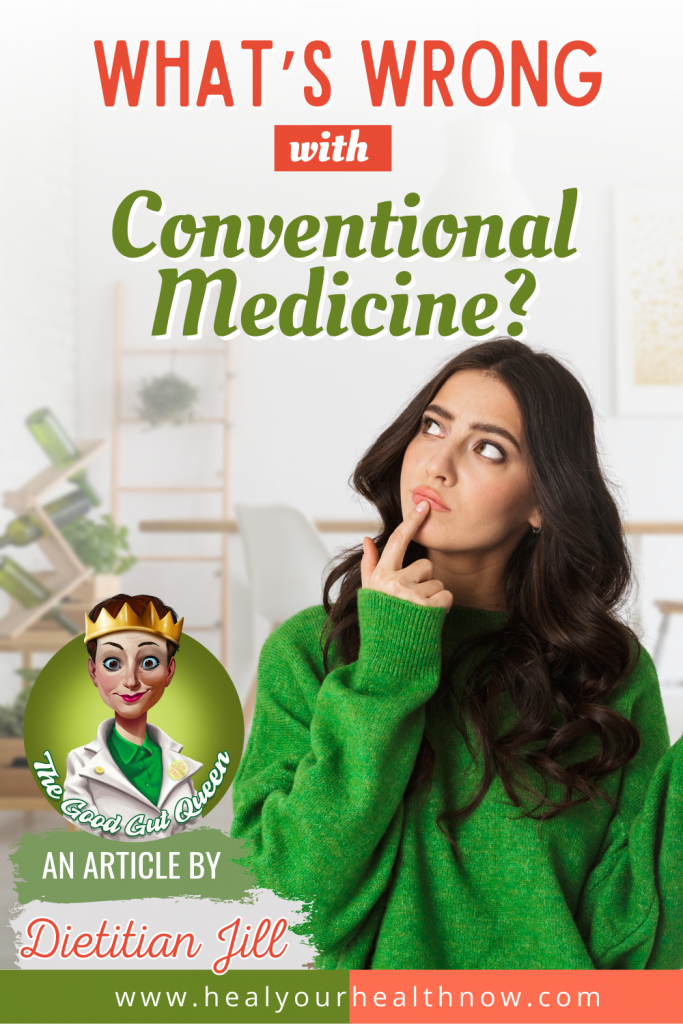