Weight is a State of Mind 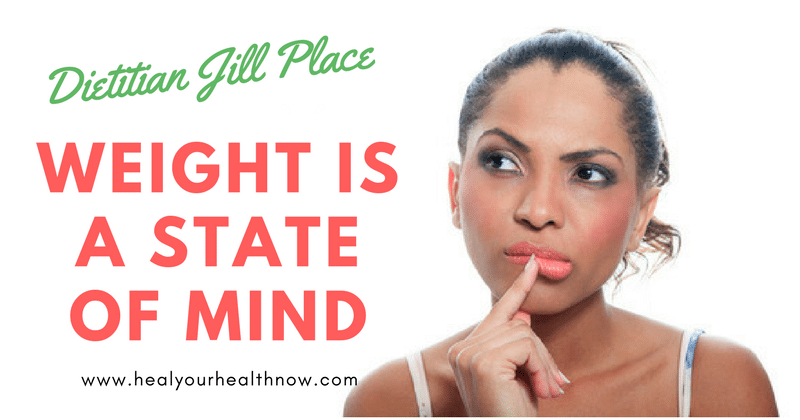 I’ve tried it all.  The hunger scale … where you rate your hunger on a scale of one to ten and stop eating about a 7.  Talking with my overeating self.  And recently had an artist in the Ukraine stitch me a fullness doll which I called Jerri.  Jerri was supposed to help me feel my fullness.  A picture of her is even the screen saver of my phone.  She worked for a while too.

But still I’m struggling with my hunger and weight.  And wondered why all my years of dealing with non-diets, anti-diets, fullness scales, and other food manipulations hadn’t helped.  Was there a piece missing … something I still needed to make this work?  I had healed much of the wounds of my mind and body from years of disordered eating abuse.  But still things weren’t right.  I’d lose 5 pounds … then kinda forgot I was watching it.  And totally lose sight of my goal to lose 50 pounds and get fit.  It wasn’t that I didn’t have the tools … I had successfully helped my clients lose thousands of pounds.  So what was I doing wrong?

Then I read an article called “The hunger mood” by neuroscientist Michael Graziano, It changed my life … and provided the missing piece I was searching for.   Graziano refutes a lot of what I’ve learned over many years.  And strengthened some stuff that I use with my clients, but haven’t taken to heart myself.

The hunger mood is hard to control, precisely because it operates outside of consciousness. This might be why obesity is such an intractable problem.

The hunger mood is controlled by the brain stem. The part most responsible for regulating hunger and other basic motivated states is called the hypothalamus … It has sensors that literally taste the blood. They detect levels of fat, protein and glucose, as well as blood pressure and temperature. The hypothalamus gathers this data and combines it with sensory signals that percolate in through other systems in the brain – fullness in the gut, the feel and taste and smell of food, the sight of food, even the time of day and other surrounding circumstances.

Given all this data, the neural circuits train up on our dietary habits. That’s why we get hungry at certain times of the day – not because of an empty stomach, but because of a sophisticated neural processor that anticipates the need for more nutrition. If you skip a meal, at first you feel acutely hungry, but then you actually begin to feel less hungry again as that accustomed mealtime passes by. That’s also why we get full at the end of a meal. Again, not because of a full stomach. If that’s your only signal, then you’re drastically overeating. As counterintuitive as it might sound, there’s normally a healthy gap between feeling full and having your stomach actually full. Psychological fullness is a feeling of sufficiency that comes from a much more complex computation. The hypothalamus in effect says: ‘You’ve just eaten a burger. I know from past experience with burgers that in about two hours the protein and fat in your blood will rise. Therefore, in anticipation, I’ll turn off your hunger now.’ The system learns, anticipates, and regulates. It operates in the background. We can consciously interfere with it, but not usually to good effect.

WOW!  What a revelation!  All my work on hunger and fullness was actually causing me to overeat.  No wonder I wasn’t losing weight.  As Graziano says, ”hunger is a motivated state of mind” as well as being partially psychological.  Makes sense to me.  There are times when I don’t feel at all hungry and I could go forever with a few morsels.  And there are others where I mow down doughnuts, candy, and anything else in my path.  But I never put this all together until I read this article.

Graziano also talks about “three bad habits” that continually boost his hunger … “the super-high death-carb diet, the low-fat craze, and the calorie-counting trap” … the most popular things we currently do to lose weight.  And since we actually don’t on them, it makes perfect sense that he found these counterproductive.  Since his is a very long article, you can read about all three by going here.

OK … you’re probably wondering how this works … how Graziano lost 50 pounds in a few short months.  First, he experimented on himself, identifying what he called “the hunger mood”.  And found that diets loose the hunger mood and cause you to eat out of control.  Then he went on a “moderately low-carb”, “a little higher fat” regime (he didn’t call it a diet … he intimated that it was instead a choice based upon his experimentation).  He also ate as much as he wanted.

Graziano also calls willpower, one of the cornerstones of our diet mentality, “false and harmful to mental health”.  So what DOES work … I think I finally know!  It’s very interesting that I been studying the concept of Ho’oponopono, an ancient Hawaiian spiritual practice, for years.  And one of the things that stuck out most from it was the idea that only 5% of what we do is conscious … in other words, we have no idea what the other 95% of our brain is doing underneath.

So we literally have to become aware of and make friends with our brain … to become aware of the conversations we’re having with ourselves … and be able to recognize our “Hungry Self” and “Sated Self”.  Graziano says that the “conscious mind is not really good at … regulating the internal environment”.  So this may take a little work to begin with, because the only way you can influence your unconscious mind is to a) become aware of what it’s saying to you and b) work with the unconscious “Hungry Self” so that it will eat less, partially by including foods in your life that unleash the “Sated Self”.  In other words, you allow those unconscious, automatic control methods to finally work correctly … and work for instead of against you.

How am I going to do that?  I’m still working on it … I just read this article a few days ago.  But I know that I’m finally on the right track after years of falling off the rails.  To be continued …

Leave Your Comments About Weight is a State of Mind Below

What do you think of this idea?  Any clue about how to implement it in your life?