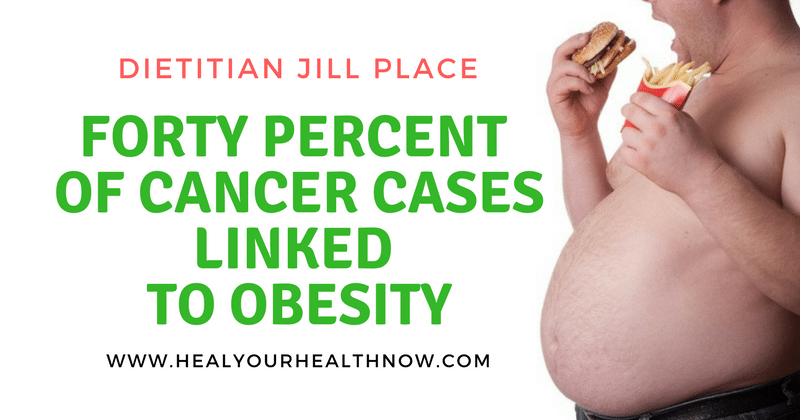 The obesity epidemic has caused far more damage than people just being overweight.  Research has begun to link this epidemic to rising cancer incidence.

First, let’s look at some obesity statistics.  Nearly 40% of adults and 19% of children and teens are obese today, the highest rate this country has ever seen.  And there seems to be no end in sight to it.

The  epidemic is even more evident when compared to the goals of Healthy People 2020 – a 2010 government program to improve the health of Americans, which included decreasing obesity. Because one of its goals was to lower obesity rates to 14.5% among children and 30.5% among adults by 2020. Yet ten times more children and teens are obese today than 40 years ago.  And we all know that obese kids become obese adults.

Which brings us to some new statistics from the Centers for Disease Control and Prevention which intimated that forty percent of cancer cases in the United States are the types of tumors with a link to obesity.  According to an online article from laboratoryequipment.com:

Some 631,000 people in America were diagnosed in 2014 with a cancer associated with excess body weight by previous research from the International Agency for Research on Cancer, the CDC reports today. The numbers of some kinds of tumors, and the cancer rates in some areas, are increasing, the agency added.

‘There is consistent evidence that a high BMI is associated with cancer risk,’ they add.

The incidence of all the kinds of obesity-related cancers increased significantly over the course of the decade (except colorectal cancer), for the age group 20 to 74.

The increase and incidence of the obesity-related cancers were driven by females (the rate of these cancers was 218.1 per 100,000 people, compared to 115 per 100,000 for males). However, that was likely because nearly half of all the female cases (42 percent) were endometrial, ovarian or postmenopause breast cancers.

The statistics were limited and confounded, however, as none of the cases were evaluated as being directly in relation to the subjects’ weights.  The weights and BMIs were not known and the role of weight gain is poorly understood at this time.  We don’t even know what proportion of these particular cancers is partially caused by obesity.

But we do know that obesity can help cause many other health problems, including diabetes, high blood pressure, hyperlipidemia, osteoarthritis, fatty liver, stroke and gallbladder disease among many others.  It also is a known risk factor for many types of  cancers, including cancer of the uterus, cervix, endometrium, ovaries, breast, colon, rectum, esophagus, liver, gallbladder, pancreas, kidney and prostate, even though more research needs to obviously be done about the direct link between cancer and obesity.

But, as a functional medicine practitioner, it makes perfect sense to me.  Bodies were not meant to be obese.  As they become overloaded, systems break down.  Immunity is compromised.  Cancer is cells gone awry … cells that don’t do what they’re originally programmed to do.  So it makes perfect sense to me that when we overload the body with poor food and other lifestyle choices, it begins to react in negative ways.  The immune system can’t clear out the cells-gone-awry as it can when at full vital capacity.  Cancer results.

I realize that it’s a lot more complicated and individualized than that, as each body system is unique.  And we definitely need more research to definitively link obesity to certain cancers.  But … also … we need to find a cure for the epidemic of obesity … what may be the cause of many cancers.  A cure that seem to have no solution on the horizon … or in the Universe for that matter.

What do you think of these statistics?  Are you concerned for yourself or your loved ones about the link between cancer and obesity?