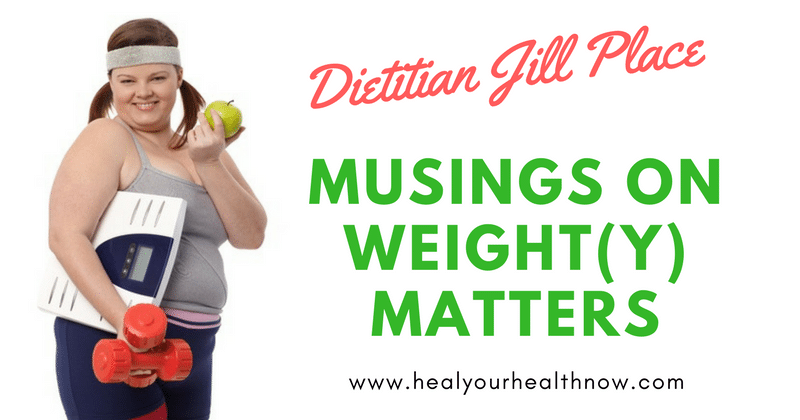 The Birth of the “Are You Weighting?” Weight-Less Weight Loss Program

If you haven’t read my article from two weeks ago, please go here right away.  If you have, then let me recap.  An article called “The hunger mood” by neuroscientist Michael Graziano literally stood me on my ear.  In it, Graziano debunked the time-honored non-diet concept of eating to your hunger.  And instead posed a theory that hunger is a learned behavior, that we eat because of this learned behavior, and the what I call “The Hunger Self” operates outside of our consciousness.  Therefore, it’s difficult to control.  The bottom line … hunger isn’t about physical sensations.  Instead, it’s totally psychological.

WHEW … what a revelation!  All my work on eating to my hunger and stopping when I’m physically satisfied was A SHAM!  Instead, I realized that we all have to make friends with our brains and what they say about hunger to really conquer this obesity epidemic.  Not beat them into submission with restrictive diets and punishing workouts.  I’m still working on a program that I think will benefit all of us.  But for now here are some thoughts about how we might accomplish this.

THOUGHT NUMBER ONE … Tune into Your Body

I was in session with one of my food sensitivity clients who also had a history of disordered eating.  And she admitted that she wasn’t aware of what her body was telling her.  I’m not surprised as those who have eating disorders divorce themselves from their bodies so they can practice abnormal behaviors.

So here’s the deal … reconnect with your body.  Because even if you don’t have disordered eating (but most of us do to some degree), it’s going to be a powerful tool for you to make any type of lifestyle change you’d like to accomplish.  I feel very blessed because I spent years connecting with myself and my feelings with varied and sundry acting exercises.  I was hours in a chair sometimes flexing each finger to see what effect it had upon me.  I even felt pins and needles up my arms then as I worked to open myself up to intense emotion by reliving personal experiences.  The pins and needles were my body literally rebelling about leaving its homeostatic state for uncharted emotional horizons.

I don’t expect you to push your body like I did (one training demanded that I leap over three people and then tuck and roll into a somersault) but I think it’s time, if you want to get a handle on your weight, to connect with your body in a profound way.  You can do disciplines like yoga, Tai Chi, or Qigong, which are like moving consciousness meditations.  You can also sit quietly in a chair and, like I did, start to move parts of your body with the idea of finding a deeper relaxation and connection with yourself.

I learned this exercise from acting guru Lee Strasberg.  All he instructed us to do was to sit in a chair and find a way to fall asleep in it.  But what I learned from actually doing the exercise was that you had to move to relax.  And, when you moved one part of your body, another part would tense.  And then you would have to move that.  So try it.  Give yourself ten minutes.  Sit in a chair without arms, take a moment to tune in, and move any part of your body that seems to want to move … then segue into another part that seems to tense because you moved the first part.  It may take some time, but with daily practice I guarantee that you’ll be much more in touch with your body than you ever thought possible.

I don’t know about you but I often hear a voice in my head telling me to eat more, what to eat, or how great it would be if I just ate …  and I’m one of the sanest people I know.  But you know as well as I do that some of us have that part that says, “go ahead, have another cookie … you’ve only had twelve”.  And it always seems that there’s a part of us that wants to get healthy.  But yet another part is contrarying, “go ahead … “

Graziano says in his article that he changed what he ate to quiet his “hunger mood”. I’m doing some experimentation myself upon foods that might better do that and will share it with you in a later article.  But I also feel that, if you’re dealing with what your brain and psychology tells you, that you have to first have to find out what it’s saying.

So here’s what I propose … grab a notebook or your smart phone and begin to jot down or record what you hear yourself saying to yourself about food … whatever it is.  The other day I told myself I wanted a doughnut.  I think I must eat one once a year.  But I wanted one, so I had one.  And big ol’ apple fritter that had a sign on it that yelled, “560 CALORIES!” But whether you act upon those thoughts or not, just notice them.  Don’t judge them.  If you truly listen, some of the things you say to yourself you might even find amusing.  I do.

When you first try this, you may hear nothing.  That’s OK.  Just notice those times when you’re compelled to eat.  Do you eat because it’s lunch time?  Because it’s there?  Because someone made it for you?  Because it just looks too good to eat?  In lieu of hearing that little voice in your head, instead just complete the sentence, “I ate because … “.  Anything you do to become more aware of how any encounter with food makes you feel and act can be a window into busting those behaviors for good.

So there they are … my beginning thoughts on Graziano’s article.  If you’d like to read the whole thing, go here.  In order to change what you do around food, it’s crucial to tune into your body and find out what you’re telling yourself where it’s concerned.  But this is only the beginning.

Leave Your Comments About Musings on Weight(y) Matters Below

What do you think of these ideas?  Are you willing to try them yourself?