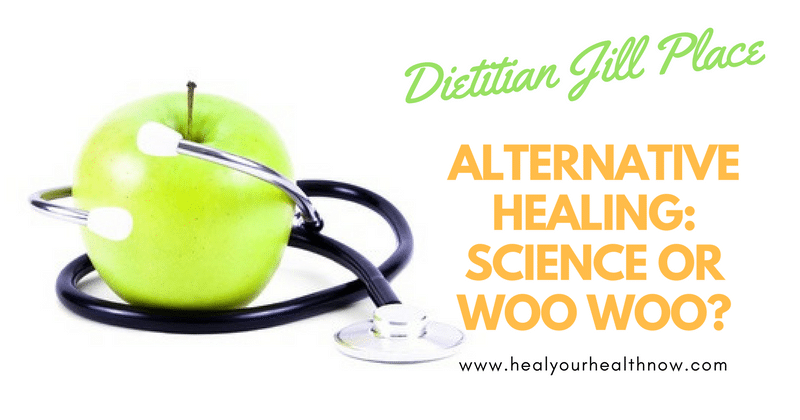 Is there a Scientific Method to Alternative Madness?

I talked to someone today.  She had done conflicting alternative medicine treatments with different doctors and gotten different answers.  She also did food sensitivity testing with me and many foods and, especially, food chemicals were found to be reactive.  We had our initial session about how to set up the elimination diet based upon these results.  And it was interesting that both forms of video communication … my virtual practice and even Skype … failed during this session.  We had to conduct it over the phone instead.  All the time I kept sensing … resistance … resistance … resistance.

I talked to someone today.  And she decided NOT to go ahead with our elimination diet.  She told me that her husband was pushing her to see a gastroenterologist.  And that’s what she was doing.  I encouraged her to go off, take a breath (actually more than one), and decide what was important to HER with her healing … not her husband, the internet (where she was getting the wrong information and subsequently panicking), or those of us that were trying to help her and perhaps providing conflicting treatments (because, in reality, we practitioners all may have different ideas about how to treat people).

I talked to someone today.  And encouraged her to go off and make her own decisions.  And that I was there in any capacity if she wanted to talk. She thanked me for my concern.  And I thought I had made a connection.  But why do I sense that I will never hear from her again?

Why am I telling you all this?  Because I have to explain daily why what I do isn’t covered by insurance as it’s considered alternative or preventive.  And that insurance only pays for sickness, not any of those “woo woo” things.  According to Rosi Goldsmith in an article on Wellness Universe (click here for the whole article) …

“Woo woo” is a derogatory label hurled by professional skeptics. Even though doctors themselves continue to order some tests and surgeries that have been disproven, the label is mainly directed at practices outside of the medical sciences.

“Woo woo” accuses people who are seeking health or self-empowerment of foolishness. No matter that many formerly woo practices have proven their value. Or that wisdom or folk traditions are themselves the source of many pharmaceuticals.

If we took away the emotional content, this accusation only means that woo woo is unproven in terms of today’s science. And, it is quickly moving to the mainstream. It is popular because it solves a lot of wellness challenges. So perhaps, woo woo is starting to mean creative and innovative ways to heal ourselves. But is it unscientific?

I had my own experience with “woo woo” when I was working in an integrated cancer clinic.  In walked a patient with a colorful bandanna on her head … a patient with breast cancer and metastases to the brain, liver, and lungs … in other words, a walking death sentence.  And this woman wanted … wait for it … weight loss advice.  I was shocked!  She explained that her husband wanted her to lose the weight she gained, most likely, from the end-stage cancer that she had.  And that her children expected her to do the same chores for them that she had done before she had gotten sick.

So I told her to go home and tell them all to go “F” themselves … and that her healing was the most important thing for her at this time.  I also gave her some tools, like meditation and mindfulness, to do.  Three months later, she walked back in the clinic, totally in remission from all her cancers, and said “I told them all to go “F” themselves!”

Radical “woo woo” at best, but it worked! My take … this woman, once she took her power back, was able to have space in her life to heal.  The healing tools I suggested most likely helped too.

The reality is that, as Goldsmith points out, that “woo woo” is moving into the mainstream.  I attended a seminar last year with big nutritional names like David Katz and David Eisenberg where alternative methods such as mindfulness, motivational interviewing, and spiritual cooking were discussed as “new” treatments for weight loss. And just the other day I happened upon the work of Mario Martinez, who shared that research had been done that concluded that a feeling of shame caused inflammation in the body.  As Goldsmith points out, the whole idea of changing our thoughts to change our bodies was once thought of as “woo woo”.  Not so now.  She also points out that “Science is not static or fixed … It may even embrace what was formerly considered woo woo”.

Cases in point … 10 years ago, Vitamin D deficiency testing was only done by alternative practitioners.  Now, it’s become a part of common testing practices by MDs.  Also, my food sensitivity testing is pooh-poohed by some MDs who say there’s not enough research to back it up, but many now refer to me as they’ve seen the astounding results with their patients.  And we have thousands and thousands of shared testimonials among us LEAP practitioners about how food sensitivity testing has changed the lives of many; just a few are on the home page of my website.

And here’s one of the many wonderful reports from other practitioners … about a child “I had a six-year-old client with asthma, eczema, joint and belly pain. Parents were able to stop some of his oral asthma/allergy meds after one month on LEAP. Asthma had significantly improved.  Also reduced use of eczema cream (within a month of LEAP). Belly pain and joint pain resolved quickly.”

Woo woo?  I think not.  Anything that can get my clients well is OK with me.  Especially something like a food program, which is what LEAP is. I’m even working on a weight loss program that incorporates a lot of what I’ve learned from all this new science about generating positive neural pathways and Martinez’s work on healing thoughts.

Mainstream treatments, especially those for addiction (10% to less than 1% success rate according to type) and cancer (50% survival rate across the board), have consistently poor prognoses. We need to embrace all those things than connect mind and body to heal people … even some of those things that some may consider “woo woo”.

And as we continue to empower ourselves to find better health, science may follow. ~Rosi

Leave Your Comments About Alternative Healing:  Science or Woo-Woo Below

What “woo woo” treatments to you do?  Do you think that current medical practices have to change to embrace new alternative thoughts?