Research4U: French Fries will KILL You! 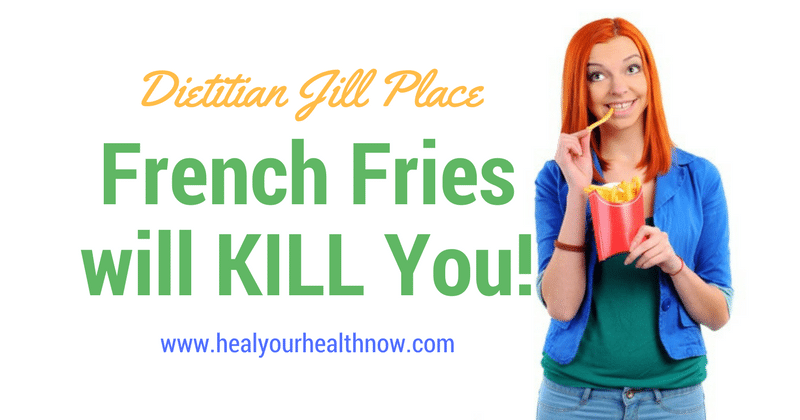 This isn’t even published yet (out June 7th), but one of the most-read journals by professionals about nutrition and its effects upon health, The American Journal of Clinical Nutrition, did it!  They published a study about the effect of fried potatoes (AKA French fries) upon mortality.

A longitudinal analysis included 4440 participants aged 45-79 y at baseline with an 8-y follow-up from the Osteoarthritis Initiative cohort study. Potato consumption (including fried and unfried potatoes) was analyzed by using a Block Brief 2000 food-frequency questionnaire and categorized as ≤1 time/mo, 2-3 times/mo, 1 time/wk, 2 times/wk, or ≥3 times/wk. Mortality was ascertained through validated cases of death. To investigate the association between potato consumption and mortality,  Cox regression models were constructed to estimate HRs with 95% CIs, with adjustment for potential confounders. … During the 8-y follow-up, 236 participants died. After adjustment for 14 potential baseline confounders, and taking those with the lowest consumption of potatoes as the reference group, participants with the highest consumption of potatoes did not show an increased risk of overall mortality (HR: 1.11; 95% CI: 0.65, 1.91). However, subgroup analyses indicated that participants who consumed fried potatoes 2-3 times/wk (HR: 1.95; 95% CI: 1.11, 3.41) and ≥3 times/wk (HR: 2.26; 95% CI: 1.15, 4.47) were at an increased risk of mortality. The consumption of unfried potatoes was not associated with an increased mortality risk.

OK … for those not scientifically literate, and not familiar Cox regressions, HRs, and 95% Cls, what this all means is that eating ordinary or spruced-up potatoes (baked, au gratin, mashed, and the like) did not affect mortality, but those that ate fried ones, especially 2-3 times and greater than 3 times per week were at greater risk … twice the risk to be exact.

So how many times per week do you buzz by your local fast food joint and partake of French fries?  When I was reading this study, I remembered the documentary, Super Size Me.  If you haven’t seen it, the documentary turned a healthy vegan into someone who was at great risk for a heart attack in 3 short weeks by eating McDonald’s three times a day; the cardiologist who was monitoring Morgan Spurlock, the star and documentarian, suggested he quit at that time (Spurlock committed himself to 30 days of McDonald’s; during that time he gained 25 pounds and almost ruined his health).  Not only that, the dietitian who was monitoring Spurlock hinted that he may also be addicted to the food he was eating, and super-sizing it to boot if the cashier asked.  Super Size Me ended the super-sizing of fries but, not surprisingly, McDonald’s still dishes up an equivalent large size helping.

Don’t get me wrong … I love French Fries … I had some last month that were so delicate yet crunchy, and liberally coated with parmesan cheese, that I haven’t stopped thinking about them.  Yes … that’s what I said … last MONTH.  I don’t as a rule eat them … opting instead for baked “fries” made at home.  If you coat fresh-cut sliced potatoes with warm oil, then sprinkle them with dried herbs and spices (I even use a little ground lavender), then bake about 15 minutes at 400 degrees, they taste almost as good as fried ones.

So what does this mean for the fast food industry?  Probably not much.  These studies never pierce the caravan of cars outside my local In-and-Out … sometimes the line is three blocks long and clogs up traffic for miles; my GPS always sends me a different way to avoid it.

The big question is … what does this research mean for you?  Will you be less apt to opt for fries now that you know this?  I even heard about it on a National Public Radio quiz show this week … so it’s being splashed around by the media.  My experience … most people don’t change their food behaviors even when it’s splashed around.  Even when their doctors warn them.  And even … sometimes … when they’re faced with life-threatening situations.

When I worked in an integrated cancer clinic, there were lots of people who just wouldn’t give up eating their favorite foods to prevent further problems.  Even though 40-50% of cancers can be prevented by lifestyle changes.  Food can be very habitual and even addictive.  So addictive that people will choose it over health.  More often than not.

So how do you weigh in?  In the real world, people change slowly.  Maybe eating fries less often?  Substituting a baked potato, which didn’t have any negative effect in the study?  Or baked fries, even if you buy the convenient, frozen ones?  What do YOU do when faced with irrefutable (this was a LOONNNG study with a lot of people … very rare in research) evidence that something is bad for you?

Leave Your Comments About French Fries will KILL You! Below

What do YOU do when faced with irrefutable evidence that some food is bad for you?  How often do YOU eat French fries?  Are you willing to eat them less often?