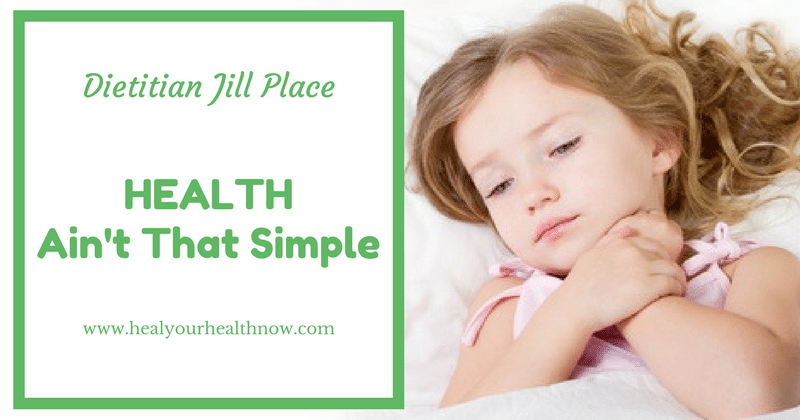 Getting Healthy CAN be a Lengthy, Complex Process

I was amused.  Which was a good thing.  If I was an uptight-type person, I might have been mad.  Because I received a text from someone I work with a few days ago that said, “I am getting many reports of clients having gas and bloating.  Is there a list of gassy foods that we could adjust in their diets to help with this.”  And, just today, I received an email from a person with a serious condition that wanted me to “cure” him in one session.

Why am I telling you all this?  Well, it seems that there’s a global consciousness that getting healthy … or healing from a serious illness … is a simple affair.  Just eat some foods that don’t make you “gassy”.  Oh, and then there’s that “mono-solution” idea, i.e.  if I avoid dairy, for example, it’ll cure all my ills. Or exercise will make me lose weight.

Is it denial?  Debbie Ford said that D-E-N-I-A-L meant Don’t-Even-Notice-I-Am-Lying (and I like to then add “to myself”).  Or the fact that, faced with something as complex as figuring out how to feel better coupled with an underlying fear of death, we just shut down.  And spin cotton-candy castles in the air.

Well I’m here to tell you the truth.  Health ain’t simple … especially now.  People are sicker, more toxic, and more physically, mentally, and spiritually overwhelmed than ever before.  A few statistics here … bear with me.  The Harvard School of Public Health says that 70% of all deaths (I apologize again for the “D” word) are due to chronic diseases like heart disease and cancer, and that 75% of our health care dollars are devoted to treat these diseases, which is why our health care system is failing.  But the good news is that The World Health Organization stated that at least 80 percent of all heart disease, stroke and Type 2 diabetes, and up to 40 percent of cancer could be prevented if people ate better, engaged in more physical activity and quit using tobacco.

Eating right?  A Multifactorial Proposition … I love statistics!  Because even though many people want to take them to heart (pun intended), they’re faced with almost insurmountable odds to make them a reality.  The down and dirty is that eating is like a pretty picture on a wall … the end result is beautiful but the execution requires training, skill, and passion.  And I think we dwell much too much upon end result in our society without addressing execution.

You’ve got to be single-mindedly passionate to bypass the pastry counter when you’ve just gone gluten-free, for example. As well as understand how to avoid hidden gluten, cook, and dine out gluten-free, which takes some skill and training.  Not to mention habit and cultural lures.  And family and friends who dish up Pasta Carbonara on your plate before you can say no.  It’s a deep chasm that most can’t crawl out from. I’ve even worked with cancer patients who wouldn’t change their diets.  Even though they knew that these changes might mean the difference between living and dying (there’s that “D” word again!)

Is it Addiction? People use food for many other reasons besides fuel.  And eat for many other reasons besides hunger.  People also would rather the couch than the treadmill … only a quarter of us (that statistic hasn’t changed in forever, and I drop in and out of it frequently myself) actually exercise enough to make a difference.  And I often say that smoking was the worst addiction I ever overcame … I finally quit for good just a few short years ago.

30 million people suffer from another addiction … eating disorders (more than those who have drug and alcohol issues), including 13% of women over 50.  Over 90% in one study had dieted at one time.  And, even though dieting doesn’t always lead to disordered eating, the fact that it persists over 50 and that more than 25% of adults have binge disorders (a quarter of us overeat so much that it becomes a diagnosable psychological issue), we must do much more than give people glossy-paper diets in cute boxes. Instead, we have to unravel the behavioral, emotional, and even spiritual reasons why people overeat.  And that takes a whole lot more than one session.

There’s a HUGE Disconnect …  Many times a day, I have to explain to people that I DON’T take insurance because it provides too little return for too much effort, takes months to pay (over 9 in one instance), and, contrary to people’s beliefs, IT DOESN’T PAY FOR WEIGHT LOSS OR PREVENTION!

Insurance pays for sickness, not wellness.  Many studies have shown that preventive programs make people well and save sickness dollars to boot.  But we don’t do them.  And, if the government has any say, we’ll have even less insurance dollars to pay for sickness.  So where does that leave wellness programs?  Buried deeply in the dust.  The bottom line … IF YOU WANT WELLNESS, YOU HAVE TO PAY FOR IT YOURSELF.

Health IS Multifactorial … Behavior and addiction aside, it sometimes takes a lot of expertise and several types of treatments to get people well.  One of my favorite cases is someone who I’ll call Barbara.  Barbara came to me with rashes and hives all over her body so severe that she often missed out on her life.  Her doctor said she had a nickel allergy … and I knew that if we started with food sensitivity testing and the elimination diet based upon it, she could cool down the inflammation that may be causing her breakouts.

Four weeks later, she pronounced herself 75% cured.  But that wasn’t enough for either of us.   In her own words … “I was aware of metal allergies that I had (I wasn’t able to wear any jewelry besides platinum), so she (me) then had me do a heavy metal chelation and begin anti-inflammatory supplements. I continued to improve so that within six months the hives disappeared entirely. I now know which foods I need to avoid and at this point there are only a handful of them! I’m now wearing jewelry made of gold without allergic reactions. Best of all, I don’t have to worry every night about how many hives will be on my face the next morning.”

Health IS a multifactorial proposition.  As a practitioner, I have to address … as above … many complex issues … food sensitivity, nutrient deficiency, and genetic predisposition among many others.  Not to mention all of the psychological chazerai we practitioners need to wade through to affect any modicum of change. Insurance doesn’t pay for any of it.  So I ask you … where do we go from here?  Because prevention is the salvation of the health care system.

Leave Your Comments About Health Ain’t that Simple Below

What do think you have to do to get and stay healthy?  Are you willing to do that?  What’s holding you back?