The Five Downs of Dieting 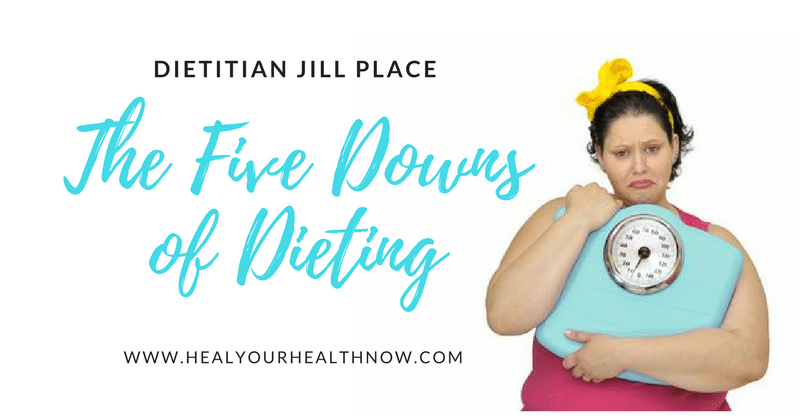 Recently, I decided to lose weight.  Not just for myself, but for you.  Because, I thought, at almost 72, it was time for me.  And, I thought, for my “Are You Weighting?” program (my new apt tag line for it is “Lose weight the right way … from the inside out”) I had to be a model for it.

So here’s what I did.  I bought a FitBit and started to track my steps and other exercise.  I also reloaded the app, MyFitnessPal, on my phone to track my calories.  I’m going to use both in my next book, Lose Five Pounds in Five Days, and wanted to test out my theory that, by eating 1200 calories a day (of course, that amount could be adjusted for larger people) and adding in burned-off calories from exercise to increase that number (for example, 1200 plus 150 calories from 45 minutes on my stepper and 50 calories from 20 minutes on my Bowflex equals 1400 calories that I could eat and log onto MyFitnessPal that day), you could lose five pounds (or more) in five days.   And feel good enough to continue some kind of reasonable plan afterwards … like my own “Are You Weighting?”

So I started … 10 days ago.  And have lost weight.  But discovered some stuff that I consider even more valuable.  I think I discovered why people embrace diets as the only way to lose weight.  And I feel so fortunate that I have so much therapy, spirituality, and other kinds of self-awareness under my belt that I was able to observe my thoughts and feelings clinically from a distance.  And kind of chuckle and say to myself, “That’s Interesting!”.  Instead of reacting to them negatively or acting out with food.  Here’s what I found out …

You Begin to Feel Anxious

As soon as I strapped on the FitBit, downloaded both apps, and began to track everything, I felt anxiety rise in my gut.  Especially from tracking calories.  Because studies show that most people with eating disorders began their disability by going on a diet. And disordered eating, which most of us have in varying degrees, is not really a disability of food, but of thought processes and learned habits we develop from our relationship with it.  The thing I hear most from people is, “I have a problem with (name of food)”.

One of the treatments for eating disorders involves tracking levels of anxiety.  Because, according to the Anxiety and Depression Association of America, two-thirds of people suffering from an eating disorder also suffer from an anxiety disorder, So when we feel anxious, our fall-back action when we program ourselves to eat is to overeat (or not).  Yes … I said program.  Because, when we form a habit we actually lay down a deep neural network and mix up a concoction of chemicals that we habitual creatures continually crave … even though they don’t suit us or we don’t want them.  So … pure and simple … we get anxious whenever we try and change the things we normally do.

Focus on Calories Makes You Obsessed

Restrictive diets, at the very least, lead to obsession, more weight gain, and ultimate failure.  Because only 5% of those who go on diets actually lose all the weight they want and keep it off.  And only about 1% maintain the loss after 5 years.  These statistics are even more dismal than recovery from all other sorts of addiction.  And still we streak from one diet to the next in the hope that the next one will be the answer.  Which makes us more and more obsessed with a system that doesn’t work.

Calories were at one time a measure solely saved for scientists.  But, with the publishing of her first and only book on calorie counting in 1918, “Diet & Health: With Key to the Calories”, Lulu Hunt Peters changed the face of dieting forever.  People became obsessed with counting calories … arbitrary numbers that are mostly meaningless to the lay person and were never meant to be used by them … instead of focusing upon inner cues of satiety to moderate their intake.

You Start to Think, “Maybe I Can Skip the Next Meal …”

Given the resulting obsession, anxiety, and odd orientation to food … which is supposed to be nurturing and nourishing … that dieting, calorie counting, and other perversions of natural intake bring, you start to fantasize about perverting it even further.  I once had a client who used most of her daily Weight Watcher’s points on ice cream.  Me … I often spent all of them before dinner.  So skipping a meal … which is metabolically a weight loss disaster as we need to keep eating to stoke our body-engine fires … isn’t a great idea.  But it’s something that most people do on a regular basis. And now I know why.

The Scale Becomes Your Only Measure of Value

I’d like to take a sledgehammer to my scale.  Because it just makes me feel bad.  And is, yet again, the source of perverted thinking about my weight.  If I gain, it destroys my day.  And I might skip meals even more.  If I lose, I’m elated!  But start to fantasize about how I can eat more that day.  It’s that ol’ neural network rearing its ugly … but far too prominent … head.

So it comes to pass that you begin to value yourself almost exclusively by the numbers on your scale.  And, again, it becomes a disconnect to who and what you really are.  The way you choose to measure your worth as a person is a major factor in the way you think about things, the choices you make, and the way you feel about yourself.

You Ultimately Give Your Power Away to the Diet

Conscious eaters eat when they’re hungry, stop when they’re satisfied, and never spend even an inkling of a moment judging what they eat.  That’s what the clinicians say.  But I’ve met very few people who could do that.  Up to 50 percent of women are on a diet at any given time, according to Judy Mahle Lutter in her book “The Bodywise Woman.” Up to 90 percent of teenagers diet regularly, and up to 50 percent of younger kids have tried a diet at some point, some as young as FIVE years old. Where do they get that behavior?  Most likely from parents who have a whole history of learned helplessness where food and weight is concerned. And, unfortunately, from the media, the internet, and even other kids.

Learned helplessness is about programming yourself to give up in the face of challenge. It’s been researched for decades, and has been linked to depression and anxiety as well as poor performance in diets, career, and generally in life.

So, to sum up, diets make us anxious, obsessed, and powerless.  But still we cling to them as a way to quiet the chaos.  And an attempt to control the fallout.  And bulging waistlines.  That’s what I learned when I went on one.  And most people are brainwashed that dieting is the ONLY way.  But there IS another.   To be continued …

Leave Your Comments About The Five Downs of Dieting Below

What emotions do diets stir up in you?  Do you feel obsessed, anxious, and defeated?  What do you do about it?  What do you wish you could do?