Here’s the LAST essential habit for a good gut … how to rebuild neural pathways. When you make new pathways that are beneficial to your health, you not only find healthier choices easier. You actually change gene expression.

You probably think that you can’t change your genes … the idea seems unreal. But I’m not talking about “genetics” … things like your eye color, your height, and how you resemble (or don’t) your parents.

Instead, I’m talking about “epigenetics” … how genes express. In other words, we ARE genetically predisposed to certain things, like thyroid, hormone and skin disorders.

But whether these genes are expressed … and the disorder manifests … depends upon many things … diet, obesity, physical activity, consumption of alcohol, psychological stress, tobacco smoking, and environmental pollutants among others.

And most importantly, how our brain interprets these. Not everyone’s brain reacts to the same environmental factor in the same way.

So … you’re probably thinking … what has this all have to do with rebuilding neural pathways?

It takes 60 days or so to establish a new habit. And not just mentally, but physically it does 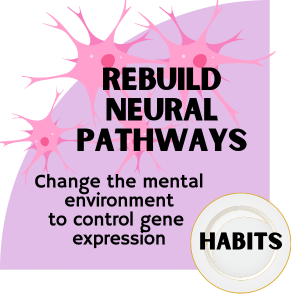 too. Your neural network creates your personality and how you see the world. You have hundreds of billions of neurons and tens of trillions of synapses that rewire when you form a new habit. It’s the same with your genes. You may be born with certain genes that your parents gave you, but every day it’s how you live your life physically controlling those genes and their activity that can make a difference. When you form a new habit, not only are there changes in the neurocircuitry or neural network but also in the genes or epigenetics. When you form a new habit, you are training the brain as well as your gene expression to allow you to go into autopilot on what you’re doing every day. We are saying you can literally be programmed by neurogenetics and epigenetics to change your life.

In other words … if you establish healthier habits ... like eating a good-gut anti-inflammatory diet (since most of the immune system is in the gut ... if you're healing one you're healing the other) ... you can turn off disease and turn on health.Click To Tweet

How Do You Rebuild Neural Pathways?

So can we rebuild neural pathways? ABSOLUTELY! Otherwise we’d never learn anything.

And research has shown that when we do, unused pathways dissolve away. Of course, if you’ve ever done lifestyle changes … and who of us hasn’t … you know that … in the beginning it’s difficult … but afterwards it flows without even thinking about it. Much like walking and talking … and those weren’t easy in the beginning either … remember?

It only takes 30 seconds of consciously thinking about something to build a new neural pathway. But it takes hours of repetition for it to become second nature.

Because we’re hardwired to absorb negative stuff like a sponge to keep us safe. You only had to touch that hot stove once when you were tiny to know that you shouldn’t touch it in that way again.

Building new positive neural pathways though … that takes a little time and effort. To make a new neural pathway, you have to go through three stages: cognition, association, and autonomy.

The cognitive stage is where you learn a new thing … like adding a fermented food into your life … by reading, thinking, planning and doing.

It’s the most difficult phase because … for example … you’re adding some new foodstuff into your life that you maybe haven’t consumed before. So you have to read up about what a fermented food is in the first place.

Then you have to think about which ones to try and when to put them into your schedule. You then plan to go buy or make them. And then just keep doing them.

In the associative stage, you start doing the new thing more … like every day. This stage is where the newly learned motor pattern starts to become more natural. But it isn’t yet, which often makes the process frustrating.

You want to get some fermented food into your life. It’s probably the easiest good gut lifestyle change to make … but you leave the house without it in the morning.

And are going out to a business lunch, so you didn’t pack the fermented food. When you get home, you’re too tired. You drink your glass of wine instead of a glass of kombucha or kefir and go to bed. And get up with an “AWWW” at 2am … suddenly realizing you forgot it.

The final stage, the autonomous stage, is where you finally do it without consciously thinking about it. We all want it now but the reality is that you have to do it over and over before it’s second nature.

I almost drowned when I was two. Recently, a friend told me it might have give me my intuitive powers. It gave me a lot more though.

But I wanted to boost my exercise and wear a Fitbit. A relatively easy task … huh. You just strap it on … pair it with your phone … and go.

But I kept leaving it in the charger … on the counter … on the sink … you name it. Finally … I just strapped it on and left it on.

After awhile I didn’t even feel that I was wearing it. I bought lots of cute bands to make it fun. And never forgot it anymore on the charger.

Recently, my old one broke. I felt such a lack … like I had lost an old friend … until I got the new one, charged it, paired it, and put it on. I haven’t forgotten it since.

So … even with a challenge like a trauma that made me uncomfortable to wear things around my wrists, I was able to get it done. I went through all those three stages to make my Fitbit autonomous. Now I wouldn’t be without it!

So can you. My advice … start small. Start with one fermented food. Or one slice of Gluten Free bread. Or one more fruit or vegetable a day.

Can you see now how Your Good Gut Blueprint (if you’ve forgotten the 5 habits … click the name to reread it) cycles around to continually cause positive change? Hope so …

You never change things by fighting the existing reality. To change something, build a new model that makes the existing model obsolete. ~ R. Buckminster Fuller 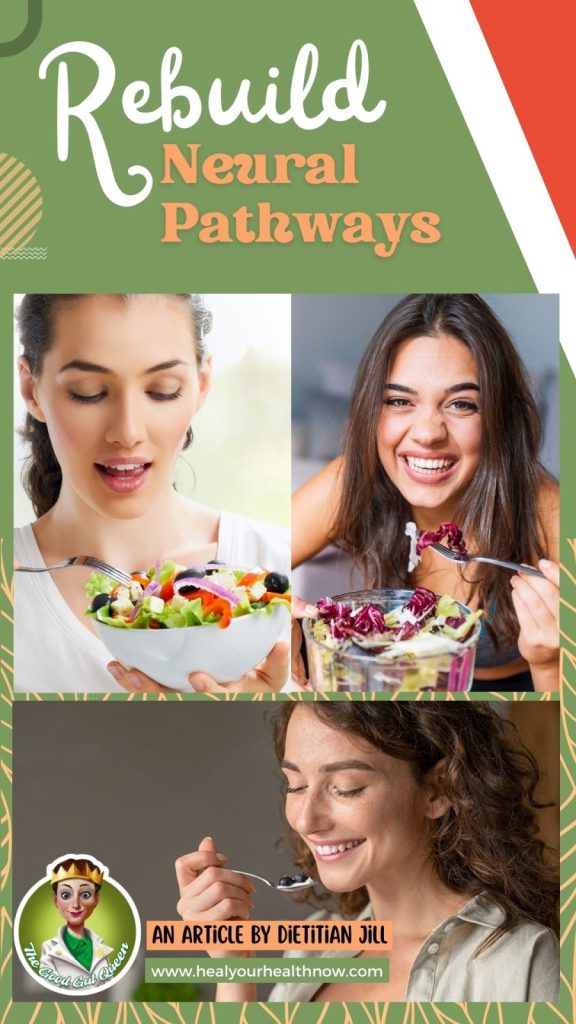