Here’s the fourth habit in my Good Gut Blueprint … Options & New Ideas. In it, we’re going to explore how to take control of your health by embracing a Functional/Root Cause Medicine.

And also look at how to do that to develop a good gut … which is at the heart of this whole blueprint. It’s the “How” of the “Why”. 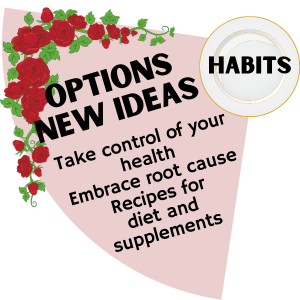 But perhaps the article that follows (taking control of your health is a HUGE topic in itself) can give you some new tips to send you down the path of lifestyle change. THIS one I”m reserving exclusively to how to embrace the concept of the root cause for what ails you by taking charge of your health.

I’m not going to sugar-coat it for you (I’m sensitive to sugar anyway … how about honey or maple syrup?)! It’ll take some major challenging of old beliefs like taking a pill for a symptom. Sad to say that’s fast becoming an outdated practice today due to the rise of autoimmune disease.

As Functional Medicine M.D. Mark Hyman says ... What’s above ground is easier to see and, in many ways, easier to treat. But unless you dig down and uproot the weed, you’ll never contain it; you’ll only stunt its growth.Click To Tweet

Health care in the United States has to change! We rank #1 in degenerative diseases in the world.

And 150th for general good health. Also, despite our abundance, we’re one of the most malnourished countries on the PLANET!

We’re losing 1 million people to heart disease alone a year. Even though 80 percent of heart disease is preventable by a combination of diet and other positive lifestyle changes.

Not to mention more than 90 percent of type 2 diabetes,  70 percent of stroke, and 70 percent of colon and other cancers. In addition, there’s current research about COVID too … read about it in my article, Poor Gut Health Means Worse COVID-19.

Traditional medicine today is … for want of a better way of putting it … pharmaceutical-driven. The current model is have-a-symptom-take-a-pill (and then take more for the side effects that those cause).

And the idea that you can heal WITHOUT drugs … and heal yourself by lifestyle change … is unfortunately far from mainstream. Not to mention, that the way of marketing drugs and other medical devices to doctors encourages the drug model as many doctors are actually paid to endorse them.

much drug research is BIASED! And money-driven.Click To Tweet.

Do you remember the studies done on cigarettes and second-hand smoke that showed that they were harmless? They were funded by tobacco companies.

And those that blamed sedentary lifestyle and high-fat diets instead of sugar for our obesity epidemic? Which sparked a plethora of commercials hailing Coke as “part of a healthy, happy lifestyle”.  Turned out those were all funded by a Coca-Cola subsidiary. Sad … sad … SAD … no wonder no one trusts science anymore …

So we now know one of the reasons why doctors “push” drugs. Another … and possibly more prevalent … is that drug therapy is all they know.

There are lots a caring, great, ethical docs out there. But they’ve never been trained in another way of thinking.

Diet as a Therapeutic Tool

I have to laugh when doctors write diet orders. They really don’t have a clue. I remember years ago when I was a diet tech sitting in a nurse’s station with an almost hysterical intern who rattled off … “She’s Indian … doesn’t eat meat … and is on a puree. WHAT DO I WRITE?”

“Why don’t you just write ‘Vegetarian Puree'”, I said. I’ve watched doctors write crazy diet orders ever since … even today.

Doctors only get about one class in nutrition in a three-year medical school. Lip service has always been paid that they should learn more … I wrote about it in an article entitled Doctors Know NOTHING about Nutrition. But I haven’t seen it yet.

This disconnect also leads people to think that diet’s not important as a healing tool. Most doctors are not only are unfamiliar with its value … they’re downright uncomfortable with the concept … often prescribing out-dated, complicated diets and just giving people a paper to follow.

diet is often the hardest thing in our lives to change as it has deep habitual, social, cultural, and emotional roots. But changing it can save your life. And doctors haven't tuned into that idea yet ...Click To Tweet

… which is actually another name for Functional Medicine. Functional medicine concerns itself with “the unique interactions among genetic, environmental and lifestyle factors influencing both health and complex, chronic disease.”

In other words, if a client had a skin rash, a digestive problem, and an achy back, I wouldn’t treat each symptom or diagnosis separately. Instead, I’d look for an underlying root cause, like stress, leaky gut, or inflammation (a kind of an oxymoron because leaky gut CAUSES inflammation) in all three.

To that end, I do a timeline of all the people I treat, starting with … if I can find the information … before they were born. One client received … prenatally … steroids because of a previous problem with her sister’s birth. She had a host of problems including joint pain, digestive issues, food sensitivities, and … of course … a leaky gut … which is what we began with.

Another had a schizophrenic mother who abused her. All these things influence our health … and more. Once the underlying causes are determined, I then work in agreement with the client on healing these causes.

To do that,  we can use nutritional and lifestyle adjustments, conventional medical treatment, mindfulness or other mental health disciplines, alternative treatments, or all of them. The goal is to return a client to optimal health … not manage a disease that can’t inevitably be cured.

Why Root Cause Medicine?

According to the American Autoimmune Related Diseases Association, approximately 50 million people have autoimmune diseases in the U.S. today … and growing. And one in 75 (mostly women) Americans have Hashimoto’s Thyroiditis … the most prevalent autoimmune disease.

I treat Hashimoto’s a lot … and unfortunately … regular treatment with medications such as Synthroid or Levothyroxine just make the situation worse for some. If you can catch Hashimoto’s early and avoid medication, that’s the best case scenario.

Because the drugs strain your pituitary gland and the hypothalamus region of your brain which regulate thyroid function. Of course … everyone is different (one of the principles of root cause medicine).

But treating Hashimoto’s with diet and supplements … and especially stress reduction as stress is a HUGE component of this problem … will most likely help and possibly heal this condition. Read the work of Isabella Wentz … a pharmacist who healed herself in exactly this way.

No only that, clients I see are so glad to know WHY they have these symptoms. They are hungry not for a pill because they’ve been down that path and are getting sicker. They want answers … and other types of treatments that actually make them well.

When I do food sensitivity testing, most clients say, “It’s such a relief to know what foods are actually making me sick!” They’ve tried to figure it out themselves … and have failed miserably.

Most of my clients embrace the concept of root cause medicine immediately. They just have to be educated.

Finally, I talk to clients daily who are horribly frustrated.

'Why doesn't my doctor do this? And WHY DOESN'T INSURANCE PAY FOR IT?” they say. I just shrug my shoulders virtually. It could be ignorance, greed, or both. But I don't tell them that. Instead, I say 'Let's get you WELL!'Click To Tweet 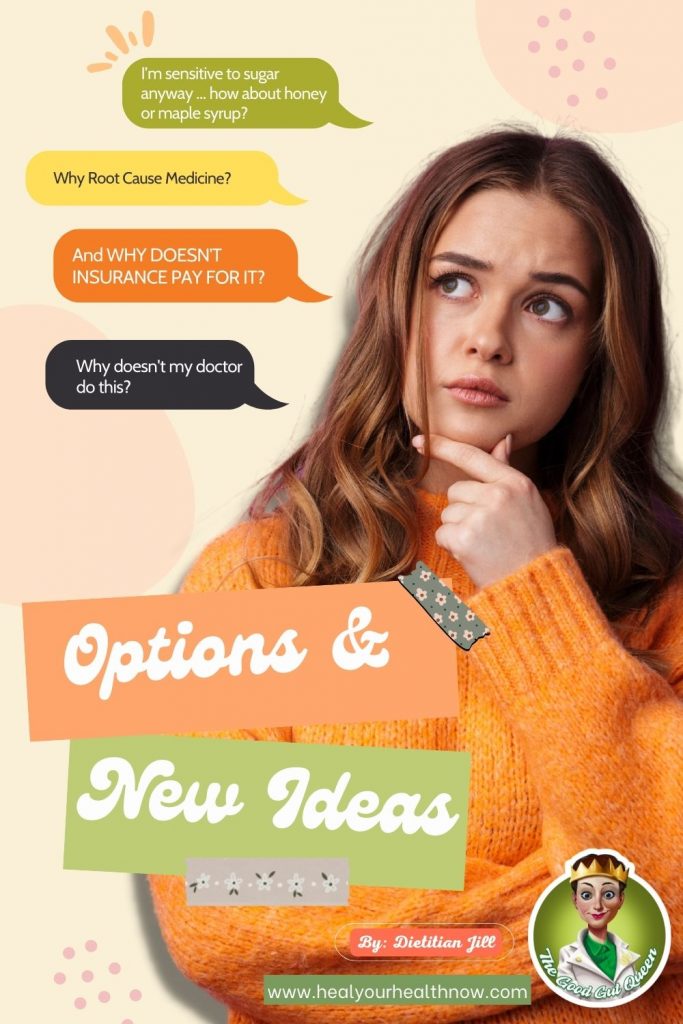