Doctors Know NOTHING about Nutrition

I remember years ago, as a dietitian trainee in a hospital, a very harried doctor intern turned to me and sputtered, “WHAT DIET DO I WRITE?!?”  I kind of remember that the patient was an East Indian with some type of texture modification.  “Write ‘Vegetarian Puree”, I said.

Now, as a Registered Dietitian Nutritionist, I’m continually flummoxed at the lack of knowledge that doctors STILL have about nutrition.  They STILL prescribe nutritional supplements (like Ensure) WITH meals for people who are not eating. Even though it’s just common sense that you don’t give them at that time to encourage people to eat more food.

Also, they have ZERO understanding of nutritional supplements. They often prescribe them due to deficiencies or medication interactions. And often they also over-prescribe.

I then have to recommend better-absorbed supplements.  Or suggest that they discontinue ones that are either interacting with medications or are duplicates of what they already have.

For example, I often have to recommend that they discontinue Melatonin. I’m sure that some drug company is pushing it for sleep as I see it prescribed all the time; doctors get most of their drug information from drug reps. Melatonin has 113 medication interactions, most of them minor.

But many of my patients are on tons of medications, so including Melatonin may be adding more fuel to the fire of side effects.  Not to mention that, if someone is already taking prescription sleep aids, natural compounds usually aren’t strong enough to lull them off to lullaby land.

British Doctors are Up in Arms about No Nutrition Training

So I was glad to read an article in the BBC News about doctors coming clean about their lack of knowledge about nutrition.  As a guest on a BBC radio show, The Food Programme, Dr. Rangan Chatterjee admitted that, “The health landscape of the UK has dramatically changed over the last 30 or 40 years and I think the bulk of what I see as a GP now – almost 80% – is in some way driven by our collective lifestyles.”

Several other UK doctors have come to terms with the fact that many of their patients have diseases that can be downright prevented by lifestyle changes.  As a matter of fact, American wellness guru, Dr. Walter Willett, has researched the issue and concluded that

'Among U.S. adults, more than 90 percent of type 2 diabetes, 80 percent of CAD, 70 percent of stroke, and 70 percent of colon cancer are potentially preventable ...Click To Tweet by a combination of nonsmoking, avoidance of overweight, moderate physical activity, healthy diet, and moderate alcohol consumption”. But British medical student, Ally Jaffee, explained that 'We're taught about 10 to 24 hours over five to six years in medical school on nutrition'.Click To Tweet

So Jaffee and fellow student, Iain Broadley, founded Nutritank, an online organization for and by medical students to share nutrition science research and organize events and lectures.  This summer, it will welcome author and podcast host Dr. Rupy Aujla to lead the first UK course in culinary medicine for medical students.

Nutritank has become so popular that it has spread to 15 other student-led groups. And this month, the British Medical Journal announced it will launch a journal on the science and politics of nutrition this June.

This is all well and good.  But Europe has often been way ahead of us with treatment breakthroughs.  We do have medical schools that teach integrative nutrition here.  But they’re few and far between.

So there’s a vast disconnect, as you can see, with the doctors that think that Ensure is nutrition (the first three ingredients are sugar, sugar, and sugar).  And the very few that really know a lot about the link between lifestyle change and disease.

… doctors knowing about nutrition and lifestyle change will go a long way to validating their patients using them.  Because, when I was working in the cancer community, research reported that up to two-thirds of the 86% who were using supplements wouldn’t tell their doctors for fear of negative feedback.  Sometimes with disastrous consequences.

Or sometimes physicians just don’t ask the right questions. A doctor once sent a breast cancer patient to me who had failed two rounds of chemotherapy. And the doctor was at her wit’s end.

It took me just a few minutes to uncover the problem … the patient was drinking massive doses of grapefruit juice thinking it was “healthy”.  Now grapefruit juice and one of its chemicals, naringenin, interfere with the absorption of many drugs, including chemotherapies.

The patient instantly ditched the juice. And last I heard was doing well on her third round of chemo.

Here’s My Most Important Take …

…doctors don’t have the time … and probably the inclination … to do what it takes to elicit lifestyle change.  They’re busy prescribing drugs and doing other treatments and surgeries.  Even with training, this may not be a really good use of their time.

I see them every day running from one place to another and spending really what amounts to just a few minutes with each patient. That’s not enough! To do what it takes, they’d have to change their treatment focus from primarily drugs to primarily counseling.

I’ve been working with lifestyle change my whole life, first as a teacher, then as a coach, then as a dietitian.  So I schedule at least hour-long weekly sessions with my clients, give them “homework”, and have them report to me several times daily in my virtual practice.

Because my theory is that we sop up negative experiences like spilled water … and accentuating the positive takes work.  Also, we have to deal with the way our bodies store habits.

They’re based upon customs and beliefs, and it takes effort to overcome those too.  Therefore, we need to do daily practice … daily laser-focused practice.  Because people need to have both knowledge and confidence to change.

So Here’s My Ultimate Take …

… doctors need to work side by side with people who specialize in nutrition and lifestyle change.  My most rewarding experience as a dietitian was in an integrated cancer clinic where we had doctors, therapists, acupuncturists, homeopaths, masseuses, and me!  We had meetings once a week to discuss patients and refer them to one another.

And they had the best outcomes because of that. I haven’t experienced that level of care since.  It launched my personally-surprising notoriety among my peers and a speaking and writing career.

I’m still waiting for another opportunity like that!  The doctor who started it all even said to one of my patients, “I know nothing about supplements … that’s why we hired Jill!”.

I loved him for that.  He bought himself quite a few years with integrative therapies.  But finally succumbed to the cancer that started his passion to launch his clinic in the first place. Words cannot express … 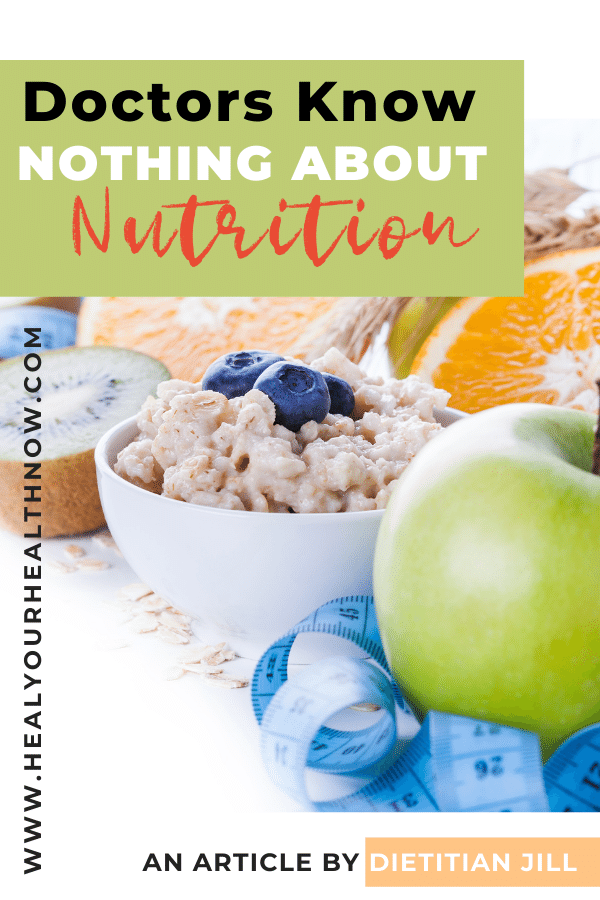