I Don’t Know and Other Denials

My apologies to any of my clients who think I’m talking about them. Because, in reality, what I’m going to reveal is so universal that it might apply to anyone losing weight, getting healthier, or otherwise putting positivity into their lives.

The other day, I asked one of my clients a key question such as “Why do you sabotage all your efforts to lose weight?”. (S)he answered, “I don’t know!” (exasperated … complete with tons of volume and a vocal exclamation point). In reality, most of us don’t.

Because we’ve either buried the truth from ourselves. Or we’re lying …

To Make a Change You Have to Stop Lying (to Yourself)

I love Debbie Ford’s definition of DENIAL …it’s an anagram. Don’t Even Notice I Am Lying. And then I like to add … TO MYSELF! But, in truth, sometimes we don’t know that we’re lying because of several reasons. Some are …

We’re Only Conscious of About 5% of Our Thoughts

When I read about Dr. Hew Len and how he cured a complete ward of criminally insane patients. Without ever seeing any of them. Merely by studying their charts and looking within himself to see how he created that person’s illness, I was transfixed.

Hew Len’s process is an ancient Hawaiian one called ho ‘oponopono. He explained it all in the book he wrote with Joe Vitale, Zero Limits. It’s about cleaning up your own act and taking total responsibility not only for yourself but also your surroundings.

You can do this merely by saying four phrases over and over … “I love you, I’m sorry, Please forgive me, Thank you” or … if you’re pressed for time … simply say, “I love you”.

Read the book to understand why. But one vital take-away I got from the process was that we’re only conscious of a smattering of what we’re actually thinking. I found that out when I acted … when you act you have to surrender to the part that’s not evident on the surface to really excel.

As I’ve often told my acting students … preparation starts in the mind but transfers eventually to the heart. If that all sounds screwy to you, and it might to some, here’s another way to look at it …

We Develop Sub-Personalities as Coping Mechanisms

This is an idea that goes way back to Carl Jung, one of the fathers of psychology. It’s call psychosynthesis. The premise is that we develop parts of us that stick up for us when we have issues with certain things.

My eating disordered clients all have well-developed ones. And the sad truth is that those parts of them will say anything to keep the status quo … even lying.

These lies are a combination of factoids they’ve learned that have been perverted over the years to cement the belief system of the sub-personality into the soul. As well as more untruths to protect its stance. Because … in severe cases … it thinks it needs to do or promote certain behaviors or you’ll die.

In less severe circumstances … as you probably know … your sub-personality will just sabotage you. It’s that little voice in your head that says, “Gwan! Eat 10 cookies!”.

Or “Spend that money and think about it later” or “You’ll never amount to much!”. What is YOUR sub-personality saying to you to sabotage your life RIGHT NOW? If this idea, however, is still too radical for you, here’s my last one …

We’re Not Aware of our Process

Most of us go about our days totally unaware of what drives us or what beliefs trigger our behaviors in the first place. So just becoming aware of those things can be the first step in stopping ones we don’t want to do anymore.

I once had a client who ate M & M’s on a colleagues desk every time she passed. By verbally deconstructing the act (i.e. we went through it step-by-step orally or by guided imagery, which I’ll talk about in a later article) she was able to loosen the hold it had on her.

Or you can write it out too, but you have to do so it great detail. With this device, she was able to let go of the behavior and lose some weight.

What are some other ways to put denial and lying to yourself at bay? Become more conscious of your thought processes.

I know we’re only aware of a small part of them but writing and otherwise asking simple questions of yourself, like “Why do I do that?” or “How do I feel just before I do that?”.

Meditation is great because you can actually glimpse your thoughts as they go drifting by. Or I love the questioning work of Bruce DiMarsico and Byron Katie. You can also get my book, Gluten-Free in 5 Days on Amazon or the free companion workbook (download it here) for my take on their powerful questioning processes.

The last thing I’d suggest is to make friends with your sub-personality. This usually takes a professional as peeling back layers can be painful.

I once had a client in a rehab that could not connect with himself. His brother had committed suicide and he had closed down from that time on. When we first met in my group, he loudly stated that he didn’t understand why people kept telling him he had to connect with his emotions.

When I explained the idea of the sub-personality, I was surprised that, on his own, he was dealing with them. But he approached me one day and said, “I’ve grown myself up (I had previously explained that the sabotaging sub-personality is often a younger version of yourself) to age 16 (when his brother committed suicide). But my sub-personality won’t turn around”.

Together … and through the magic of guided imagery … we were able to turn around the part that was hurting. He cried! And thus began a profound healing.

So I hope I’ve given you some ideas to help you stop denying and therefore sabotaging yourself. It DOES take work … everything worthwhile does. But it’s definitely worth it. As we say in the rooms of addiction, “It works if you work it! And YOU’RE WORTH IT!” 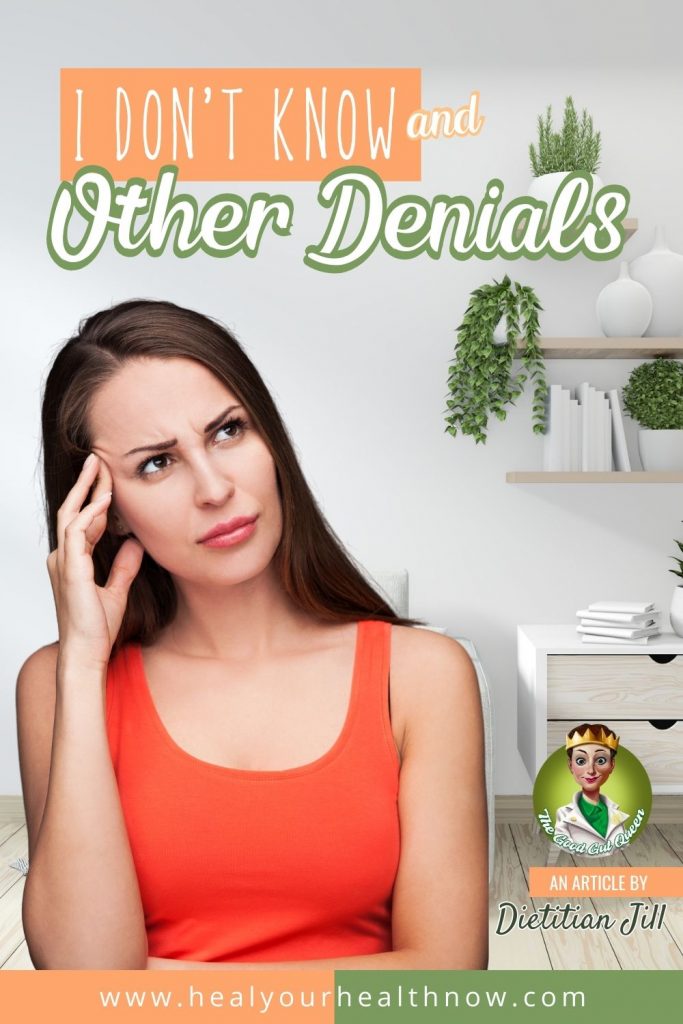