Beauty is NOT in the Eye of THIS Beholder

I published this years ago. And I’m still getting into my beauty as we speak …

So I’m sitting in a little café in Pasadena yesterday waiting for my date. Across the room were two VERY attractive, VERY well-dressed women. The one facing me caught my attention and loudly said, “You are SO beautiful … with those earrings and everything!”

Now I’m 71 this month. I was wearing huge ten-buck earrings and a simple long white shirt over exercise pants as I had just finished teaching my acting class and only had time to change my shirt. And she thought I was beautiful??? Truth be told, I had never thought so.

Why Do We Women NEVER Think We’re Pretty?

I grew up fighting with my weight. I also had a big Jewish nose compliments of my dad.

I was starving by my teens, taking pills and getting some kind of animal urine shots. Slimmed down 70 pounds, I attracted the attention of someone I had a huge crush on … big nose and all.

So, by the time I went to college, I got the message that thin was totally it. Especially since Marilyn Monroe’s curvy frame was fast being replaced by the emaciated Twiggy look as the feminine ideal.

Of course, with my Russian peasant hips, I could only manage a size 6 at my thinnest. And I didn’t hear it when my gorgeous blonde roommate sat me down and explained that it wasn’t beauty that ultimately got the guys… it was confidence. Ironically, even though men fell all over her, she didn’t think she was pretty or confident either.

Big nose gone by age 23. But the battle with the weight wore on. I was good at losing it for acting parts however. Which probably ruined my metabolism.

Size fourteen to six to play the ingénue in a ‘50’s musical where I wore this amazing hand-painted gown and got sung to about how beautiful I was by the whole company. All with the magic of predigested protein, which was later proven to be dangerous.

The Height of my “Beauty”

I reached the height of my erstwhile beauty when I worked in children’s theatre. I had never been much for exercise but, to do the rigorous acting I needed to do (somersaulting off of stages, running 50 feet screaming on my knees, and the like), I had to get in shape.

We worked out two hours a day three times a week, did birthday parties on weekends, and I also ran four miles up and down my hill and worked out with another member of the company on our off days. I became obsessed.

Of course, I never thought I was pretty then either. Even when I was followed around by a Rockefeller at an arts conference and invited for drinks by him the first night. Everyone at the conference thought we were together.

It helped us get a lot of bookings. And a touring grant. He was one of the sponsors. And I was being mildly romanced by a true American prince.

Years later, I met my old workout colleague for dinner. I had had a falling out with my boss and left the theatre before I got to see our latest publicity shots.

She presented me with one. It’s sitting atop the bookcase in my office right now. My immediate reaction to it was, “Why didn’t you tell me I was so beautiful!”

OK … I DID pick up the pieces when one of the major players left. And I DID write that grant and get it to the proper people within a hair of the deadline to win the first California Arts Council one for a children’s theatre.

But what deeply impressed me from the whole experience was that I had missed the boat again! I had failed to acknowledge that I was pretty at the time it was happening. And I still don’t think I am.

So why don’t I? Here are some thoughts …

Society Makes Us this Way

We try to emulate an impossible ideal. Only 5% of population look like the models and actresses whose bodies we seem to crave. And those are mostly airbrushed anyway.

I remember that I had an acting colleague who shared with me that she didn’t think she was beautiful either. I exclaimed, “But you’re on a F-ING full-body billboard on Hollywood Boulevard!” See … even some who are that impossible ideal don’t think they’re pretty.

I’m so glad that the cover of the latest Sports Illustrated swimsuit issue features a plus-size model. It’s a long time coming. But, in actuality, the plus-size model looks about a size 14 … the average size of most women today.

And most magazines and other media still infantilize and objectify women. Who allow it.

We Want to Attract a Partner

I never felt pretty enough to attract a man. So I settled for second-class ones. They were second-class in many ways … and all of them eventually made me profoundly unhappy.

The man I considered the love of my life even told me I wasn’t pretty. And since I lacked the confidence that my long-ago roommate talked about, I believed him.

I had just taken a break from my acting career … where you had a be knock-out gorgeous and pencil thin … and I thought everyone was skinnier and prettier than me … so I believed him. For many years.

The “love of my life” was stubby and marginally attractive. But he was a bonafide genius … and, even though I don’t consider myself one, he was an intellectual match.

Some  men I dated, however, were incredibly handsome.  One of those “beauties” and I ended up in a situation in a bar with a BIG idol of mine and his wife as the only patrons.

The wife corralled my date. Which gave me an opportunity to speak to my idol about his landmark TV show. We were eventually invited for tennis … which we both knew wouldn’t be about tennis.’

We laughed about it all the way home. But we very soon parted. He was far from genius … deep conversations bored him. Another version of second-class man.

It didn’t matter which type of second-class they were. I starved for all of them.

In reality, if your partners love you because you’re a sexual object, they won’t love you for long. Because we age and sag … don’t I know it! Your true partner loves you for you.

I’m tired all these years later … tired of changing my looks for someone. Instead, I’m going to do it for myself here and now.

So here’s what I propose … and I’m going to talk about it in further articles … here’s my tentative manifesto.

1. I will NO LONGER think that I’m fat, ugly, or need to live up to some impossible standard thought up by a society that does not love or respect me.
2. I AM BEAUTIFUL NO MATTER WHAT SIZE OR AGE I AM.
3. I honor my beauty every moment of every day.
4. I honor my body and do my best to feed and treat it well.

People often stop me now and tell me I’m beautiful. I never had this happen when I was younger. So for me aging has, at least on the surface, made others more interested in me and who I am. ~Betty Silverstein, in Wise Women 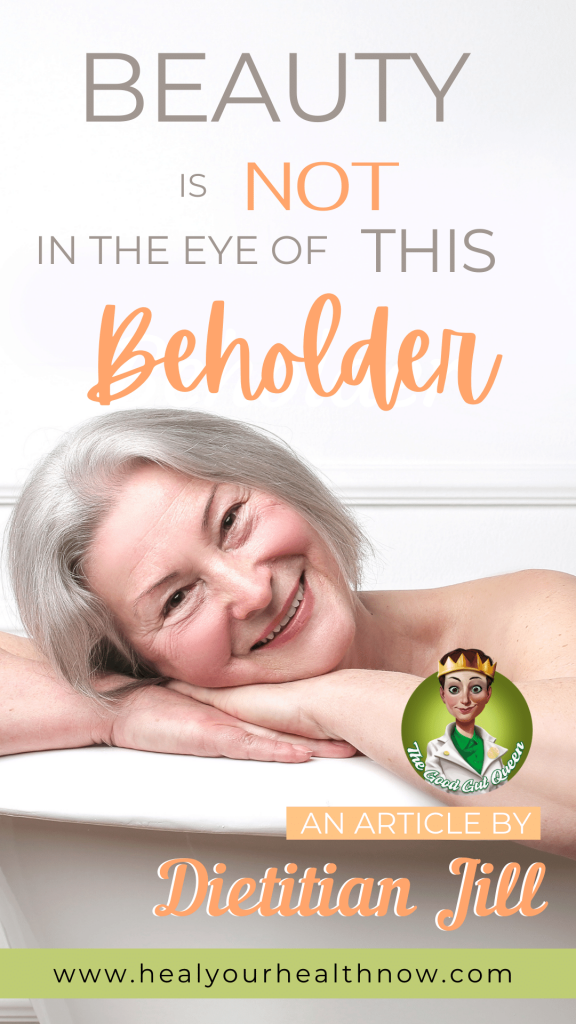