Exercise Makes You Happier than Money

I was going to continue with some more info to put more exercise in your life (read my last one here). But … as MY life always seems to follow a synchronicity … an article about exercise making you happier than money popped up online this week that I just had to share with you.

Synchronicities are multi-media signposts that force me to pay attention to something I need to know.  And perhaps knowing that exercise makes you happier than money will also motivate you.

There were actually four pages on Google from voluminous sources about this same research.  I  searched there for “exercise makes you happier than money lancet” (as the original study was published there).  Researchers at Oxford and Yale had collected data about the activity and psychology of more than 1.2 million Americans. And came up with the following …

How Researchers Found Out Results

Research participants were asked to answer the following question: “How many times have you felt mentally unwell in the past 30 days, for example, due to stress, depression, or emotional problems?” They were also asked about their income and physical activities.

Participants had a choice of 75 types of physical activity … from mild ones like mowing the lawn, caring for children, and doing housework.  As well as strenuous types like weight lifting, biking, hiking, and running.

They also grouped “mindfulness exercises,” such as yoga and tai chi, together.  One article from bigthink.com called that “a slightly strange decision, given that even those two disciplines leave distinct imprints on your nervous system”.

But type wasn’t really important here. As the primary goal of this research was to better understand the difference between movement versus no movement. The design was very simple and far-reaching.  But yielded very telling results.

Scientists found that those who exercised regularly felt mentally unwell for 35 days a year.  While inactive participants tended to do so, on average, for 18 days more.

The  most fulfilling activities were team sports and cycling.  But those “mindful activities” scored higher on the study’s “satisfaction index” than walking.

Researchers also found that physically active people feel just as good as those who don’t physically compete but who earn about $25,000 more a year. In other words, you’d have to earn a lot more to reach the same level of happiness that’s achieved by doing sports.

Americans often think that have tons of money is the definitive path to happiness.  But another recent study concluded that the highest increase in depression and anxiety in recent years has been in the wealthiest segment of the population.

Perhaps we need to re-prioritize  our lifestyles?

Too Much Exercise is Actually Detrimental to Happiness

When I was working inpatient eating disorders, there was a frequent patient who was infamous for being “The Walking Woman of (name of her town)”.  Evidently she would get anxious (a trigger for disordered behavior to begin), begin to walk, and couldn’t stop.

Now … that’s an extreme example. But researchers in this study also found that more was not better when it came to exercise.

“The relationship between sport duration and mental load is U-shaped,” said study author Adam Chekroud of Yale University in an interview with Die Welt (click if you read German). Because the study also found that exercise contributes to better mental well-being only when done for prescribed amounts of time.

Three to five training sessions of between 30 to 60 minutes per week were deemed ideal. The mental health of those who exercised for longer than three hours a day (like my “Walking Woman”) appeared to be in worse mental shape than those who exercised little or not at all.

Why is More Not Better?

One of my all-time favorite books as a kid was Lost Horizon. The moral of the story was “Everything in Moderation”.  That’s certainly so with just about everything.  Eat moderately and lose weight.  Exercise moderately and be happy!

There’s at least two reasons why.  Unless you’re an ultra-elite athlete … who’s pushing boundaries way beyond normal activity … exercise can tire you out.  Fatigue can make you less happy … and more prone to overeating and other compulsive behaviors.

Like my “Walking Woman”, over-activity also can lead to even more obsessive-compulsive acting-out.  Addicts who give up their “drug of choice”  may substitute exercise to get that “high” of working out.  And with that over-activity comes that inevitable anxiety that triggers more addictive behaviors.

Obviously, more research needs to be done, especially about how particular exercises impact mental health.  But this study seems to affirm that money can’t buy happiness.

And that regular exercise is a primal need within us. It only makes sense as, for most of our history, the swiftest and most physically fit survive

One of those articles about this study on bigthink.com summed it up rather nicely by saying that, “A rather old lesson, yet one we seem to keep forgetting. The chemistry of satisfaction and self-assurance relies on blood flow, not cash flow. Money is helpful. Movement is necessary.”

I’m doing “THE GOOD GUT SHOW” daily in my “Good Gut Group”.  Join us … and catch the latest … by clicking here. 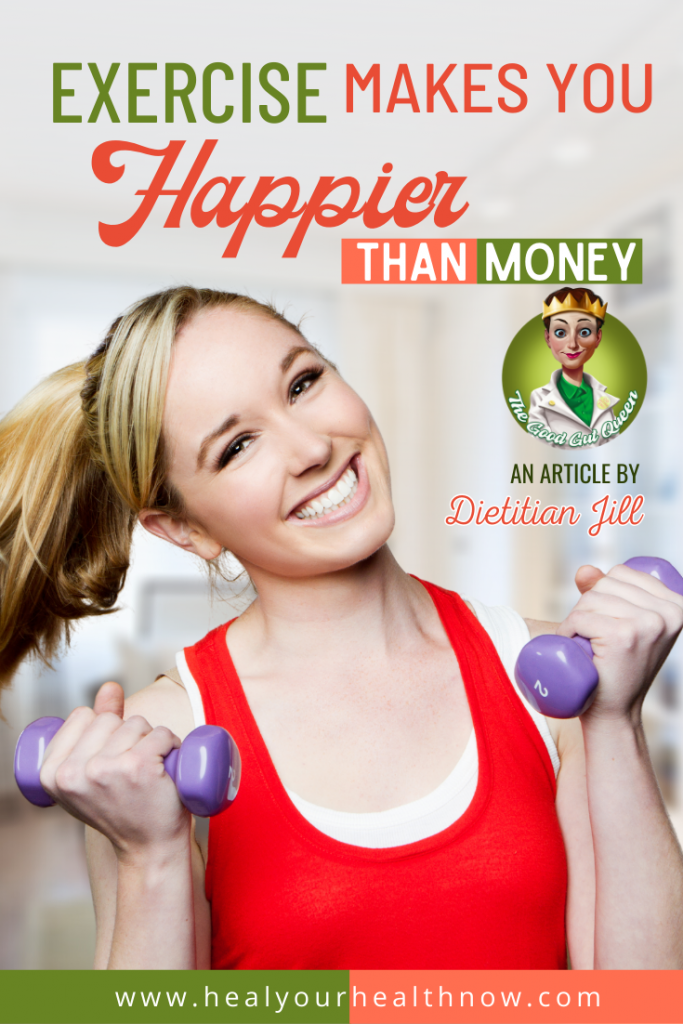