4 Ways to Exercise Every Day

I’ve had a lifelong battle with how to exercise every day.  But there were also long stretches where I was absolutely dogmatic about sometimes three hours a day of running, gym, and working out strenuously with my children’s acting company.

In those days, I was so fit and connected with myself that, at an arts conference, I was followed by a Rockefeller and asked to drinks with some very high-up people; everyone at the conference thought we were together as he just kept sitting next to me.  As a result, the theatre got lots of work … a testimonial to my then fitness and togetherness.

And then there were years where I sat and did nothing.  I have a room full of exercise equipment.  And pass it every day on the way to the bathroom.  But there seems to be excuse after excuse of why I can’t go in there … from I don’t have time to my body is aching too much.

I was working with my chiropractor the other day; he’s a terrific healer and, when we work, it’s not only a tonic for the body but for the mind as well.  So I’m on the table spouting about things esoteric as I often do when he’s treating me … and then … out of my mouth came the words, “purposeful movement”.

I started to talk about the fact that

I’ve been so struck with cultures like the Masai and the Aborigines, who run all day across the desert because they have to.  And knowing that farmers (think of the Amish) can walk 125 miles a week just doing what they do.

If that’s not “purposeful movement”, I don’t know what is.  But those populations had to move, frankly, to live.  So how can we couch potatoes (only one in four of us exercise on a regular basis) translate this move-to-live consciousness to our own fitness?

Fitness for Me Was About “Purposeful Movement”

It dawns on me that fitness in my life has always happened for a purpose.  I had roller-skated, rode bikes, and walked to school when I was a kid.  As an adult, it started in earnest because I was an actor; I spent two hours moving in a chair, learning about my body so I could more fully express my roles.

And continued with improvisation as an original Groundling.  But it really escalated when I got into children’s theatre; I almost didn’t make the cut because I wasn’t physical.  So I started running … and working out two hours 3 times a week with the company … and working out with one of them at the gym the rest of the time.

I ran into my fifties; all that early activity had sparked a regime.  Then I had to stop when my knees gave out.  Running was “purposeful movement” to me.  And I haven’t found anything to replace it since.  I regard my exercise equipment with the same enthusiasm as I do cutesy 20 year-olds with rock-hard abs.

I started doing Qigong about two years ago.  And have consistently kept it up.  Partially because it’s helped me be more mobile.  And partially because, being older, I realize now that I truly have to move to live.

But also it touches a meaningful chord within me, because it’s not only a physical tonic but a spiritual one.

I want to be like that 88 year-old who still does gymnastics, or the 95 year-old who gets prizes for running.Click To Tweet

So I better get back to running, huh?  I don’t know if my knees will agree, though.

Actually, I’m thinking of a whole new regime … one that I formulated when I was teaching acting.  The whole idea behind it is to reconnect with your body and movement in both a deeply physical and spiritual way.  So that whatever activity you do becomes purposeful … and something you’d want to do every day.

To start, I happened upon … compliments of my ex-personal trainer … exercises that mimicked the primal movements of babies.  The first time I did them, I cried.  They’re actually suggested in a book called Becoming Bulletproof. But I put my own spin on it.

So here’s what I call “The Rock (n’ Crawl) ‘n Roll”. FYI … you need knee pads to protect your knees for these … or a thick carpet … Do all three of these exercises in quick succession but don’t move on to the next until you feel the urge to do so.  And slow down and savor each before you do.

Get down on all fours and rock back and forth five or ten times either with your feet together or feet parallel like a baby rocking in its playpen.

Staying on all fours, crawl forwards and backwards a few times. Make sure you crawl with the opposite arm and the opposite leg to awaken your physical core.

Variations of this exercise are a) the Spiderman crawl (curl your toes under and raise your body up to crawl like Spiderman; try to keep a flat back and your back as low to the ground as you can).

Here’s the second variation … b) the Military crawl (bend your keg and bring one knee as close to your arm as you can; crawl along the floor like soldiers do)

Variation: on your back, bend your leg and use your leg to roll onto your belly. Lift the opposite leg behind you and use it to roll back onto your back. Keep your arms above your head at all times.

Second Variation: With your arms crossed over your chest, roll back and forth by lifting only your head. Try not to use your legs to roll over.

Try these before any exercise regime you do.  They should only take 5 to 10 minutes.  If you’d like to go deeper, try this … (FYI … my next article will go more into depth about connecting with impulse through movement … right now, just do the following with no intellectualizing or judgement …)

Starting with the head, move it any way it wants to move. Pay special attention to face tension points on the forehead, around the nose and especially around the jaw, and move until relaxed. Let the jaw hang.

Then, moving down to each part of the body, do the same. Don’t forget to pay attention to the other parts of the body that you moved to make sure that they don’t tense while you’re working on another part.

If that happens, move back to the other part and relax it before you move on. Move all the way down to your legs. Then, take a moment and see if you’d like to move the body in a different way; do whatever you feel like doing … perhaps fists want to punch, legs want to kick, or the pelvis wants to undulate.

Mindfulness can make staying on track with your exercise regime even easier.  Go here to access all of my Micro-Mindfuls … short, sequential, snippets of mindfulness that anyone can do! 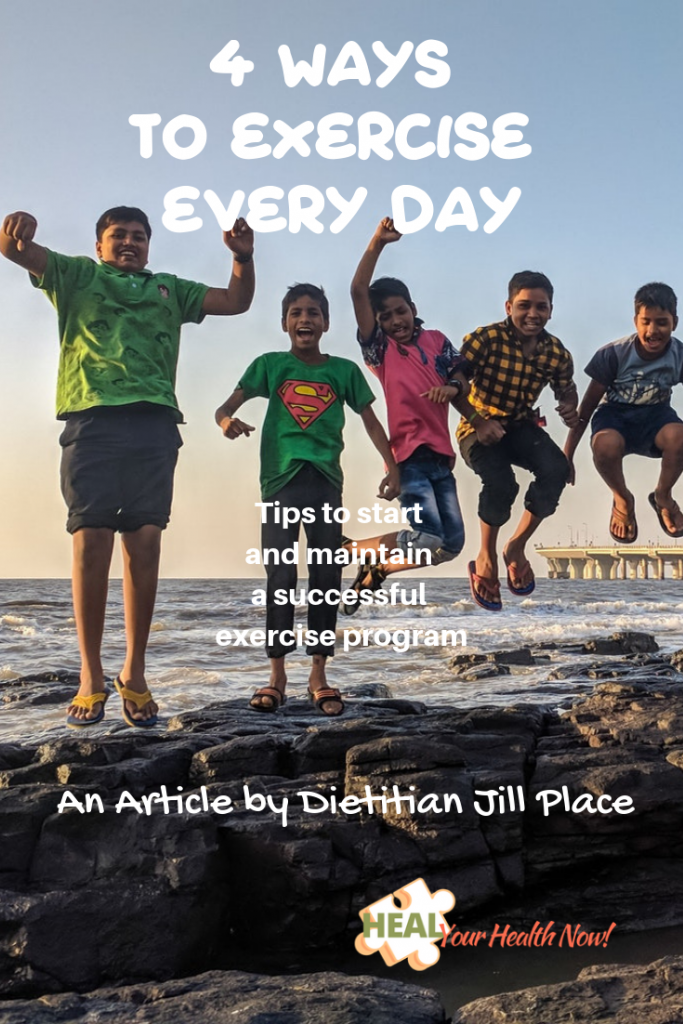