Yet, we’ve rolled out two vaccines that really don’t have “enough proof” that they work either. Hey, I know we need to do something.

… sustained antibody counts are not the case in the 56-70 and 71+ (my demographic) age groups. In these subsets, the neutralizing antibody counts fall anywhere between 50 and 75 percent. This suggests that in these age groups, the duration of neutralizing antibodies from the Moderna vaccine will be relatively short, potentially less than a year. And that immunity may only possibly last 6 months (after developing the virus).

This was startling because … as a healthcare professional … I was able to get the Moderna vaccine free of charge.  But … sore arm and a day and a half of queasy stomach later … I wonder if it was all worth it.

Clearly, we know even less about the virus and the vaccine than we know about these supplements, which have tons of research to back them up. And even more studies have begun on them post-COVID.

Even Dr. Fauci, after saying that most “so-called immune boosting supplements” actually do “nothing”, came out in favor of Vitamin D. “If you are deficient in vitamin D, that does have an impact on your susceptibility to infection,” Fauci said. “So I would not mind recommending — and I do it myself — taking vitamin D supplements.”

Oy gevalt … so much schizophrenia! So …

Where Do We Go From Here?

I have to admit I missed it … maybe because, according to its history, it has received “scarce attention due to the World Health Organization (WHO) advising against the use of corticosteroids in the beginning of the pandemic”. They were also waiting for randomized controlled clinical trials, which were done along the way.

These trials appeared so positive that more widespread use was adopted. Maybe that’s why I haven’t heard of it until just a few weeks ago, even though it originally came out last January. What am I talking about … the MATH+ Protocol.

The protocol was formulated by “an alliance of established experts on critical care, Front Line COVID-19 Critical Care Alliance (FLCCC)”.  And in the title … MATH + HOSPITAL (yes … I said “hospital”) Treatment Protocol for COVID-19 … “A” stands for “Ascorbic Acid” (Vitamin C) … “T” stands for “Thiamine” … and the plusses include Zinc, Vitamin D, Quercetin, Melatonin, and Magnesium.

Yes … that’s what I said! A doctor-published protocol that states “This is our recommended approach to COVID-19 based on the best (and most recent) literature”. That includes supplements … and larger doses than I’ve seen before … as part of all stages of infection treatment.

But Wait a Minute …

I’m going to back up here and say that NO KNOWN TREATMENT can prevent or cure COVID at this time. But this particular protocol has had growing acceptance because of “an increasing number of hospitalist and ICU physicians who recognize the sound physiologic rationale, the emerging published research in support of the components, and the data demonstrating good clinical outcomes in hospitals that have adopted the treatment regimen.”

And … to pick up where I started in this article … these protocols were abandoned at first. But now seem to be more and more embraced because of that all-important “data demonstrating good clinical outcomes in hospitals”.

The reason for that … social media. Dr. Mobeen Syed, better known as “Dr. Been” to one million medical professionals and students in 182 countries who follow his instructional videos on Facebook and YouTube, uploaded four separate videos on the MATH+ treatment protocol.  When asked why, he said …

I believe that MATH+ with an aggressive early intervention is the most comprehensive and the best choice available to the medical community … MATH+ is the most important core management approach to save thousands of lives.

Not only that, it lends itself to be extended based on individual patient’s body habitus, co-morbidities, etc. If it was up to me, I will (sic) make MATH+ a mandatory protocol for COVID-19 management.

Why MATH+ Wasn’t Used Right Away …

And when asked about the apparent refusal of medical and media authorities to take MATH+ seriously, Dr Syed explained …

… the people with the interest in earning from this situation will not allow protocols that are simple, inexpensive, and obvious to get enough visibility. Companies that are trying to position their orphan drugs as silver bullets and build their brands take more media time …

A majority of the doctors are also not keen on trying anything outside of the guidelines given by health authorities … health authorities are also mired with political stancing. … the management approaches are tried and tested for decades and MATH+ should be backed at all levels.

WOW … he called it about doctors. And their dependence upon health authorities that have political agendas.

And that Big Pharma has more clout, money, and political affiliation to better position whatever they’re selling. Even some of the top government scientists have been speculated to back certain treatments for their own financial gain.

So I’m glad that MATH+ has surfaced. Yes, it DOES call for one drug, Ivermectin, but also endorses DAILY use of a collection of supplements.

A Collection of Supplements …

One thing that struck about this protocol was the use of many (by some of my pill-hating client’s standards) individual supplements. Something I personally endorse and use myself. Check out Dietitian Jill’s Immune Tonic  that has most of them.

I use it every day. And get tested on a weekly basis. And have never tested positive.

Lately, I’ve noticed that my colleagues are hawking a single supplement blend. And, while, it’s more convenient to pop one or two pills … which appeal to my pill-hating clients … blends may not have enough of each required supplement to meet the requirements in the MASK+ Protocol … the one that meant for you to do today.

Click here to get it right now. My other gripe with the blends is that they feed into that whole have-a-symptom take-a-pill mentality.

I don’t know of any blend that has that much. Also, some supplements need to be taken in divided doses to keep blood levels up throughout the day.

Also, taking certain supplements together makes their effect even stronger. Yes, taking supplements has many protocols too. But … and this protocol bears it out … that they’re vital for getting and sustaining health.

Rationale of Some of the Supplements …

I’m only going to touch on a couple here. And just briefly. As this could take all day … and then some.

That’s why I’m starting a whole research part of this website. I do research and read studies every day. And will have links for them for you to access in the near future. Sign up for my emails by getting “The Heal Your Gut Diet” below to stay posted about this exciting new development …

Meanwhile, let’s look at a couple of the main supplements in the MATH+ protocol. First … Vitamin D …

The reality is that 42% of the US population is vitamin D deficient with some populations having even higher levels of deficiency, including premenopausal women, those with poor nutrition habits, people over age 65, Caucasians who avoid even minimal sun exposure, and those who take prescription medication long term (i.e. just about everybody).

We in the alternative community looked at Vitamin D deficiency as a serious health problem over 25 years ago. It took a long time from the medical community to catch up … now most people, especially the elderly, are tested.

Love this article, The FDA Should Consider Vitamin D as a Pharmaceutical Agent for COVID. Lots of rationale here. And Vitamin D, in reality, has tons of positive research. Supplements aren’t FDA-regulated. Perhaps it’s time that we had one that we called an honorary pharmaceutical.

In addition, quercetin acts as a zinc ionophore (binds with zinc and transports it across cell membranes.) It is also likely that vitamin C and quercetin have synergistic prophylactic benefit. WOW … there’s that whole synergy thing again!

So there you have it. As democracy has won out over and over again in this country, so has the little guy and the truth. Supplements aren’t just good for nutrient deficiencies.

They’re powerful healers. And they work together and with drugs to provide even more oomph. And perhaps the ultimate answer to this horrible scourge that’s currently devastating us in so many ways. 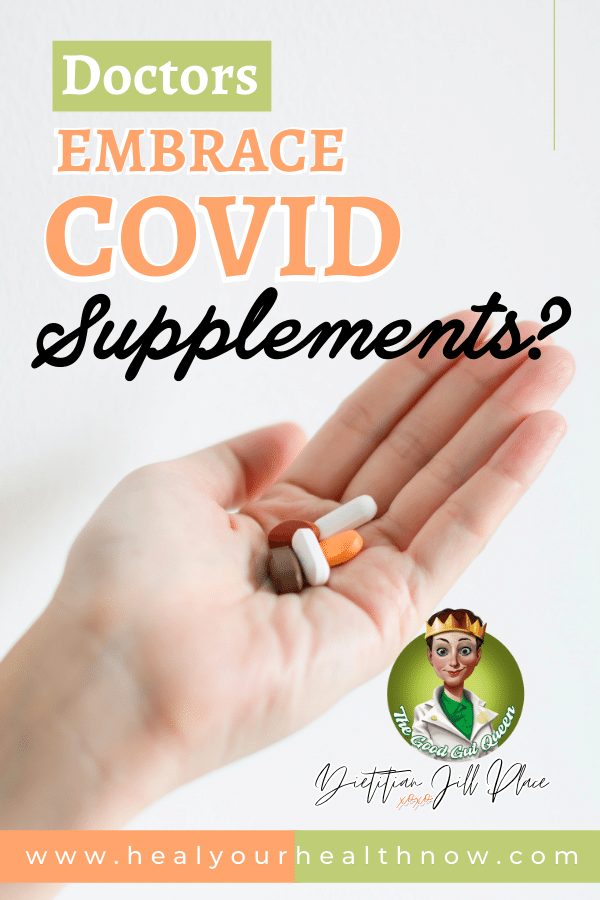