I kinda HATE calories!  Probably because the body doesn’t give a fig about counting them.  Also, the metabolic effect of two foods with, say, 200 calories each, can not only be markedly different but markedly different for different people.  So maybe calories DON’T count after all?

Yet one of the biggest questions I get from clients is “how many calories should I eat?” So I’ve made it a point to know a lot about their history and how they falsely became the greatest gilded idol that we worship on the altar of weight loss.

First of all, a calorie is a scientific measurement which was never meant to be a weight loss demigod. Its official definition is the heat (when foods are burned in a calorimeter) needed to raise the temperature of 1 kg of water from 0 to 1°C.

Around the early 1900’s, Professor Wilbur O. Atwater elevated the popularity of the calorie when he and his team at Wesleyan University studied the caloric content of over 500 foods with the idea of finding both a scientific and a healthy way of maintaining body weight.

However, with the publishing of Diet & Health: With Key to the Calories by M.D. Lulu Hunt Peters in 1915, the idea of calorie counting really took off for the general public.  Diet & Health became one of the first diet books to become a bestseller, and remained in the top ten non-fiction bestselling books for over four years.

What made it so popular?  Well, as a past reviewer of diet books and a part of the Fit for Life (another hugely popular diet book) team 25 years ago, here are my theories:

So I wasn’t surprised when I “googled” calories and up came tons of articles refuting them as a weight loss panacea; I especially liked “The Useless Concept of ‘Calories’” by Dr. Jason Fong, in which he explained how foods with the same number of calories are metabolized differently.

If you’re interested, here’s the link.  And I also wasn’t surprised when a new JAMA study talked about in the New York Times last week touted diet quality over quantity (i.e. calories) as a primary weight loss tool.

It found that people who cut back on added sugar, refined grains and highly processed foods while concentrating on eating plenty of vegetables and whole foods — without worrying about counting calories or limiting portion sizes — lost significant amounts of weight over the course of a year …

Published in JAMA and led by Christopher D. Gardner, the director of nutrition studies at the Stanford Prevention Research Center … It was a large and expensive trial, carried out on more than 600 people with $8 million in funding from the National Institutes of Health, the Nutrition Science Initiative and other groups …

[They wanted to] compare how overweight and obese people would fare on low-carbohydrate and low-fat diets. But they also wanted to test the hypothesis … that some people are predisposed to do better on one diet over the other depending on their genetics and their ability to metabolize carbs and fat …

[The researchers split participants into] two diet groups, which were called “healthy” low carb and “healthy” low fat. Members of both groups attended classes with dietitians where they were trained to eat nutrient-dense, minimally processed whole foods …

The participants were encouraged to meet the federal guidelines for physical activity but did not generally increase their exercise levels (my emphasis) … In classes with the dietitians, most of the time was spent discussing food and behavioral strategies to support their dietary changes.

The new study stands apart from many previous weight-loss trials because it did not set extremely restrictive carbohydrate, fat or caloric limits on people and emphasized that they focus on eating whole or “real” foods …

“The unique thing is that we didn’t ever set a number for them to follow,” Dr. Gardner said. (also my emphasis)

The bottom line … some people gained weight, and some lost as much as 50 to 60 pounds in both groups! Which must have shocked the evaluators because they were expecting only one group to lose more weight.

But both groups lost about an average of 12 pounds, and also saw improvements in health markers such as reductions in their waist sizes, body fat, and blood sugar and blood pressure levels. But the ones who lost the most reported that they had changed not only what they ate but how they ate.

In other words, they changed their food behaviors to include things like sitting down to eat a meal instead of gulping it on the go, avoiding fast food, and cooking and eating with family.

So it was ironic that, a couple of weeks into the study, participants asked evaluators when they were going to have to cut back on calories.  And were finally pleased that they didn’t have to.

But the concept of calorie counting has so permeated our culture that, sad to say, most of us … and also these participants … are brainwashed into thinking that cutting back on them is the only way to lose weight.  Obviously, they now think differently.

My take-away from this study … restricting calories and traditional “dieting” are out (although I don’t know how we’re going to convince the millions and millions who still deeply believe in them 100 years after Dr. Peters’ book was published).  Eating good-quality food is in (but I don’t know how we’re going to convert most of the U.S. population, who eat take-out, highly processed, or fast foods on a daily basis).

Especially … and it was addressed but not really applauded in this definitive study … if participants change their mindset, food behaviors, and other things that would also support their weight loss.  Perhaps a new study focusing on those parameters?  I’m in!

What do you think of this study?  Do you think that there are other ways to lose weight than counting calories?  What’s your experience with them? 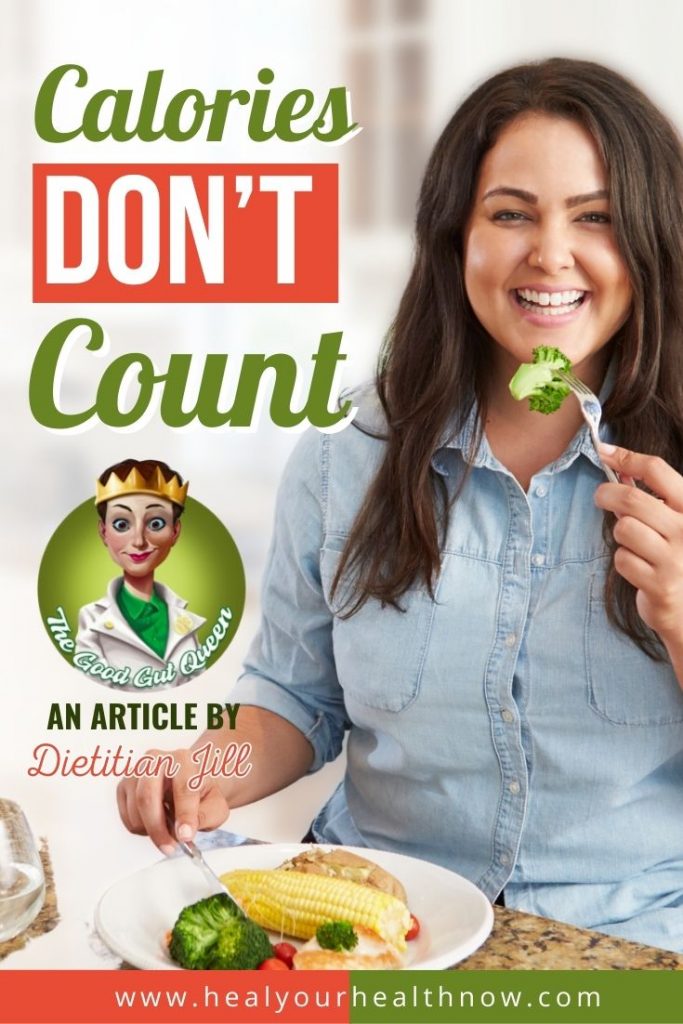