Be Yourself: Lessons from “Sweet Charity”

By Dietitian Jill Place  AKA The Good Gut Queen

I have a 3-D vision board I made at some women’s workshop years ago. I pass it many times a day in my hall. In it is a pin that a long-ago ex-boyfriend gave me. It’s a picture of some sort of African dancer with a huge horrific mask-headdress.

It reads simply, “Be Yourself”. I get the joke … but it’s never made me laugh.

I don’t know WHY I hung onto it. Or why it ended up in on this vision board. Perhaps it was there to remind me … constantly …

I’ve been thinking a lot lately of that phrase. And how it applies to my life. You see, I’ve had many passion-incarnations around my careers … which to me is my multi-illuminated prism into my authentic self.

The first incarnation was my passion for acting. This single-minded passion lasted from age 11 until I was about 40.

I had some early successes in musicals. And studied with the greatest acting coaches of my generation, participated at the Actor’s Studio, ran Lee’s Strasberg’s (best known for his role as the villain in the movie, Godfather 2) school in L.A. for a time, studied my ass off, and eventually coached. Lee was also my mentor.

Shelley Winters Told Me to “Get a Job”

I had carte blanche to attend any class I wanted at the school. So I jumped at the chance to be secretary for the once-a-year sessions that the great actress and amazing Method coach, Shelley Winters, taught.

I did what I thought was an unsuccessful scene for her … my preparation failed miserably. During the critique, all the emotion I had prepared for the scene spilled throat-clenchingly out. I could barely catch a breath!

Shelley said (after the torrent subsided), “You’re fantastically talented, but over-trained. GO GET A JOB!” I never forgot that (how could any aspiring actress … especially from the mouth of an idol). And I did just that.

I did a lot of auditioning for the few places that put on plays then. You did that in those days so you could invite the right people and possibly get “discovered”. And maybe it was a testimonial to what Shelley told me, but I beat out a lot of others many times.

One of the places I did multiple very successful productions was the Morgan Theatre in West Los Angeles (it’s still there!). So when they had auditions for the musical, Sweet Charity, I was there in a heartbeat.

I’m not a dancer … and it’s really a strong dance show … but I was reading for everything in those days. And … boy … I had lots of confidence in my singing (lessons since age 8 and musicals off-Broadway) and acting (lots of plays and doing scenes at the Studio)!

Anyway, the audition lasted through multiple reads and FIVE HOURS! I was even taken out into the lobby (where people had previously applauded me upon my entrance after several plays), to do clumsy ball-changes (a dance step) with the frustrated choreographer.

Why am I telling you all this? And what has this to do with “Be Yourself”? Well, looking back, here’s what I eventually learned about this and other acting experiences …

Find Your “You” Anchor

In those days, I thought that acting was the only “You” anchor I needed. I guess you can define “You” anchor as the primary way I defined myself.

And the way I lived. Yes, I was a schoolteacher by day to pay the bills. Actually a substitute teacher. So I could leave at 2:30 and not bat an eye about lesson plans and preparation for next day. And still earn enough money to live a decent lifestyle.

But when 2:30 came around could head for an audition (by that time I had an agent and a very powerful casting director rooting for me to succeed) or Strasberg’s (I was the Assistant Coordinator by that time … we who worked there all had impressive titles) or the Actor’s Studio to work on a scene with some soon-to-be star.

Well … besides Shelley Winters telling me I was “fantastically talented”, I kept getting little messages from people in the know as well as the Universe that this was my “You” Anchor.

I didn’t get the part … I wasn’t surprised. But I had a call from the director the very next day (they NEVER do that … and I WAS surprised).  He profusely apologized for not casting me … and said another thing I’ll never forget. “You ARE Sweet Charity”.

People have been telling me similar things about my acting for years. My last review … from the Los Angeles Times for a part that I never thought I could do … “Place owned her part”.

In my early years, I guess that I defined myself … and my “You” anchor, by positive things people said about me. I had a gift … a facility to be someone else. I took it as a sign that that being someone else was being me. Boy, was I wrong!

Now I know that being myself is a much more  complex proposition. One that encompasses a lot of the following …

I was ultimately relieved when I didn’t get the part. As an actor, I knew that I had to do whatever the part called for. Which meant hours and hours of dance rehearsal. And not the great performance I was used to doing.

Acting taught me my limits too. I was a classically-trained Method actress, steeped in drama. But my forte was comedy … and musicals where I DIDN’T have to full-out dance.

Suffice to say, I began dance lessons. And very soon afterwards was cast as the lead in Cabaret. If you’ve seen the movie, you know that the lead didn’t dance much.

I fell off the chair that I did my first big number on many times during rehearsal. But the singing and acting shone through … and I knew in my gut I could do this role.

So I guess this was less about limits and more about knowing how and when to push yourself. Acting taught me to push my limits a lot.

And understand that it’s never perfect. That all you can do is rehearse your ass off and hope that you’re ready opening night. And prepare a lot beforehand so that you’ll be ready for the role you take on. And those are the only limits to know.

Oh … boy … at 74 I realize that finding your voice was the fulcrum of being yourself. And that singing and acting were the vehicles by which I ultimately found myself.

Because they were the bridge to expression. Not only as an actor but a human being.  I then realized that all of that voice-finding work … from early singing lessons through Strasberg’s relaxation through Grotowski’s (a little-known revolutionary of acting training) voice training … was really about finding my own truth and voicing it.

Through acting, I was able to reconnect my voice and body. Most people, constrained by society, have these ripped apart at an early age. As a matter of fact, Grotowski said “the most elementary fault, and that in most need of correction, is the overstraining of the voice because one forgets to speak with the body”.

“Overstraining” to me means so much more. As a singer, I know that if I put even a tiny bit of pressure on my vocal chords that the sound would not come out right.

To me, it’s exactly the same as not speaking the truth. If I didn’t, my body and mind … because they were now indelibly linked to my voice … would suffer. Now I can actually say things I mean without fear.

And it’s like a muscle … just keep doing it until you get it right. Try it some time.

Find a Way to Be Calm

Being a Method actor meant using a lot of my personal experiences … some of them traumatic … as fodder for preparation. It took its toll. I developed a full-blown panic disorder.

Also, auditioning and performing can be a very stressful proposition unless you develop a strategy to be calm. Richard Burton once said that he transferred his performance anxiety to his feet and, as a result, could not move them to enter a scene.

I totally got that! Actors all have a recurring dream that it’s opening night and they’re going out on stage to perform a play they’ve never rehearsed … it’s called “The Actor’s Nightmare”.

My main way of combating all this was breathing. I love it so much that I now incorporate it into my treatment of my clients. And have developed an entire program of sequential snippets of mindfulness which I call “Micro-Mindfuls”.

There are many other ways to be calm: Yoga, Qigong (my particular favorite), guided imagery and meditation to name just a few. I’ve even developed my own form of physical guided imagery called “Acting Out”.  More on that later …

Do Some Major “Soul-Searching”

I’ve written a lot about my spiritual journey … in articles like There is no END to Getting Well and How to Ditch the Wallow and Fly Out of the Mud. I even had a 10-year stint doing a spiritual acting column called “Art and Soul” for an acting resource website, Now Casting.

A famous actor even wrote me a lauditory email once about how he had never read anything by anyone who linked acting and spirituality as well.  There were lots of other fans too … most who were seeking a spiritual connection through their acting.

I certainly did. Acting gave me more gifts than I gave it. Including connecting my voice and body, giving me a huge outlet for expression, and unique tools that that I can not only use in acting but in life.

And, true to another gift … the ability to link acting and spirituality … I am now able to put all those tools to work in my life and career as well.

Doing soul searching helped me leave acting for good too. I pursued the false “You” anchor of being loved for my gift … not for myself … for years.

The ultimate pratfall? What really needs the loving? Me, myself, and I. 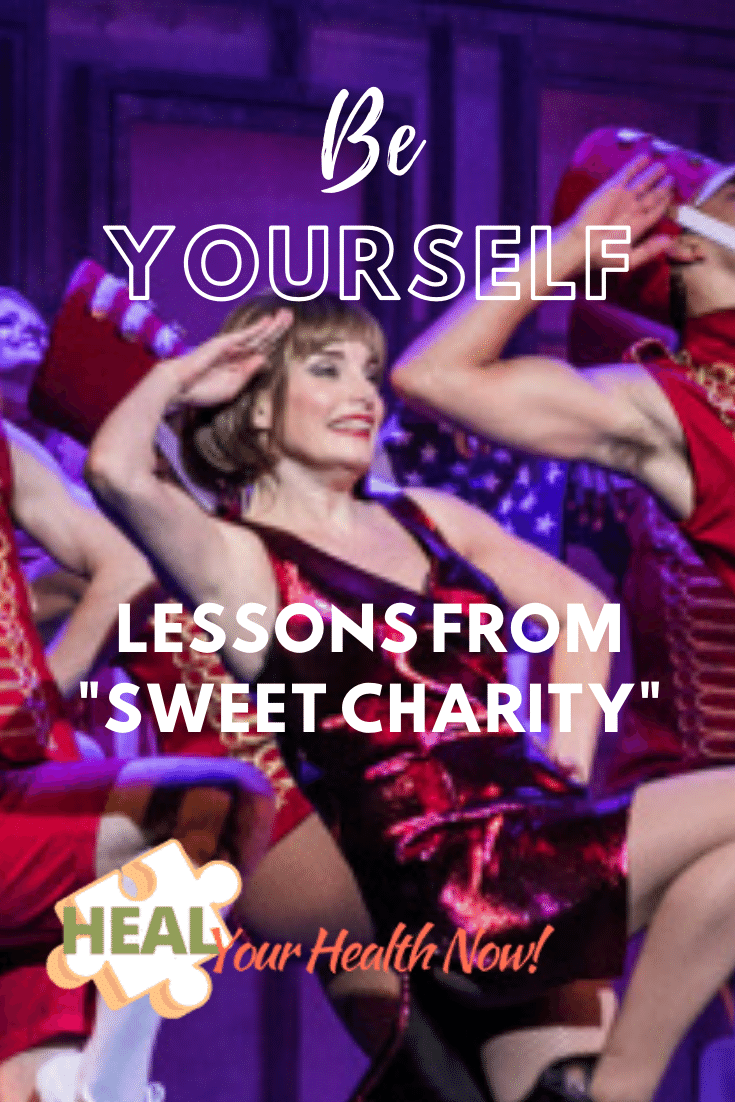