To Be or Not To Be … Gluten-Free 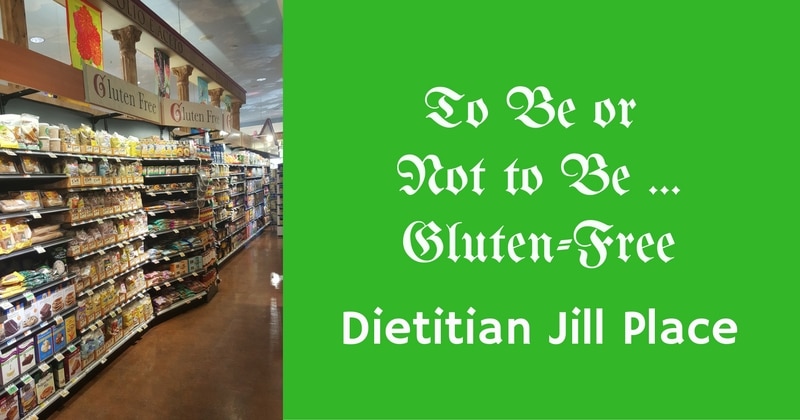 An Excerpt from “Gluten-Free in 5 Days”

At a recent Nutrition and Behavior Change Summit that I attended, some of the top researchers in the field pooh-poohed Gluten-Free as just another fad. Kinda made me mad. Not only because I literally wrote the book on it … “Gluten-Free in 5 Days” … and Go Gluten-Free myself. But doing so has made more clients than I can recall lose weight and be well.

And … research isn’t totally conclusive yet … but hints that up to 60% of us Americans may have something called gluten intolerance. The number of people with celiac disease … total intolerance to gluten … also doubles every 15 years … and no one knows why. So I don’t think that Gluten-Free food is going away anytime soon. Especially since, when visiting my sister in April, I happened upon the grocery store above that had a huge aisle dedicated solely to Gluten-Free … as well as half a frozen-food case. More than my own Whole Foods.

So here’s an excerpt from my book … now available on Amazon. It explains WHY going Gluten-Free might be for you. And why the gluten in today’s grains may be the culprit. When I did research for the book, I was downright shocked by what I found! And finally understood that that grains are the newest addition to our food panoply. Which may be why our Neanderthal digestive tracts have such difficulty with them. But you judge … here are the facts … from “Gluten-Free in 5 Days”.

At this point, you might be thinking what is gluten, and why do you have to be free of it? Pure and simple, gluten is the protein part of most grains. Yes, I said protein. Most foods, especially those nurtured in the earth, have all the big three nutrients: protein, fat, and carbohydrates. Nature wisely made them that way so that they can not only feed you but grow the next crop.

Therefore, all grains have gluten. But those of us that are sensitive, including the 1 percent of celiacs, have the most difficulty with the type of gluten that’s in wheat, oats, barley, and rye.

We all love bread and other grains. But our grains aren’t those wild ones we first tamed 10,000 years ago. The bread we eat today isn’t the kind that Grandma grew up with. And here’s what current research seems to suggest:

We have mutant seeds, grown in synthetic soil, bathed in chemicals. They’re deconstructed, pulverized to fine dust, bleached and chemically treated to create a barren industrial filler that no other creature on the planet will eat. And we wonder why it might be making us sick?

And let’s face it: we’re eating a ton more starchy sweet stuff these days. Thanks to our other penchant for replacing the fat in our diets with starches, we’ve eaten more grains in the last forty years than we have in all human history. Don’t I know it! When I was the spokesperson for Health Valley Foods years ago, I helped create a fat-free baking cookbook that replaced fat with—you guessed it—gobs of sugar, which we found out later also caused another whole host of problems.
I don’t know if there’s more gluten in grains today as some experts say and many people think. Every time I hear this about gluten, I’m reminded that we just haven’t done enough research comparing ancient to modern grains to conclusively know why we react to gluten the way we do. I do know, however, that many of us are sick, and we have to do something about it. Fast.

So … what do you think? Is going Gluten-Free right for you? Do you have Irritable Bowel Syndrome for example … a problem that occurs in a whopping 47% of the gluten-challenged? Going Gluten-Free may then something you might try. Let’s get down to it.

Have you tried a Gluten-Free diet? What were the results? Are you thinking about going Gluten-Free? Why?