Can Obesogens Make You Fat?

When Tom O’Bryan, one of my fave alternative health gurus, started talking about Obesogens, my whole thickening body stood at alert.  Y’see … we’ve always equated weight loss with eating less and exercising more.  And lately (and the crux of my new “Are You Weighting?’ program) with lack of attention and abnormal relationships with food.

But O’Bryan has a totally different take on this now-epidemic.  He’s equating a great part of it to obesogens, chemicals in our environment that makes us fatter.

Time to look at the bare facts about obesity. In the United States today, more than 35% of adults and nearly 17% of children aged 2–19 years are obese. And the epidemic has spread worldwide in developing countries.  You also can’t explain away the growing girths of all types of animals, not only pets but others exposed to an urban environment. Obviously, their weight gain isn’t about diet and exercise as animals aren’t victims of compulsive overconsuming or radical changes in eating or activity.

Robert H. Lustig, a professor of clinical pediatrics at the University of California, San Francisco, (as well as O’Bryan and many others) may have the answer.  He postulated, “[E]ven those at the lower end of the BMI [body mass index] curve are gaining weight. Whatever is happening is happening to everyone, suggesting an environmental trigger.”

Plain and simple they’re environmental pollutants and toxins that can contribute to obesity by altering metabolism in some way.  Many of these bind to thyroid (which control many, many aspects of metabolism) receptors on every single cell of the body.  As a result, they may alter thyroid metabolism, which may be the reason I see so many Hashimoto’s thyroiditis (an autoimmune disease of the thyroid) clients these days.

The many things that toxins also do are alter weight-controlling hormones, alter sensitivity to neurotransmitters, and change sympathetic nervous system activity. Which brings us to obesogens.

There are quite a few, but the main one in food is high-fructose corn syrup. This obesogen, found in tons of products, messes with insulin (another metabolism-regulating hormone) and other appetite-regulating chemicals. And boosts your desire to overeat.

Not only that, research has shown that it can create even more belly fat than regular sugar.  And is much more cost-effective and, therefore used in just about everything.  So don’t believe those commercials that say it’s healthier or just like sugar for a minute!

Which brings us to actual chemicals in and around food.  There three major obesogens …

These are surfactants used in non-stick pans like Teflon.  98% OF ALL AMERICANS have PFOAs in their blood … a scary statistic.

This chemical is labeled an obesogen because it can cause an endocrine disruption that has been researched to cause obesity . Other negative effects of PFOAs have been documented including thyroid and kidney diseases as well as several types of cancer.

To minimize negative effects of PFOAs, toss your nonstick pots and pans.  If you miss the ease and practicality of nonstick (I just made soup tonight with a fraction of the recipe-recommended fat in a nonstick pan), buy non-PFOA nonstick cookware.  Hey … my All-Clad nonsticks are expensive but PFOA-free.  And super to cook with!

BPA is used in the manufacture of all plastics, including food and drink packaging … and even cash register receipts and all type of tickets. BPA mimics estrogen and binds to estrogen receptors, therefore crowding out what’s supposed to be there in the first place.

As an obesogen, research has shown that BPA causes a biochemical cascade within fat cells that increases inflammation and stimulates fat cell growth. O’Bryan says that babies used to be tested for BPA exposure.  But now it’s a moot point as every American has detectable levels due to its widespread use around just about everything we eat.

I cringed when he described BPA dripping into Starbuck’s coffee due to the plastic lids used.  Any plastic that’s heated (or not) leaches BPA into your food.  And BPA-free packaging is not always the answer, as there may be other elements in plastic just as dangerous.

To minimize the effects of BPA, avoid plastics as much as you can. I know that’s difficult as they’re everywhere  … and I know that I’m having difficulty finding all-glass containers to store stuff in.  Let alone find alternatives for plastic wrap. Even the culinary lavender that went into my soup last night showed up in a plastic bag.

O’Bryan has suggested that you switch to stainless steel coffee mugs and fill them up at Starbuck’s instead of using theirs.  And I’ve switched to glass and stainless steel water bottles for the tons of water I carry every day.

These are called “plasticizers” as they’re a group of chemicals that make plastic more flexible and harder to break.  Think “plastic tubing” and you’ll find these everywhere, from the tubes that milk cows all the way to your soft drink dispenser.

They can show up in shampoo, hair spray, deodorant, nail polish, insect repellent, and even your shower curtains. And are detectable in meats, tap water, and pesticides … among many other places.

To minimize the effect of Phthalates, you can check out the Environmental Working Group for food that contain phthalates, BPA, and any other pollutant for that matter.  There’s also an extensive list of safe skincare products there.

Also, stay clear of plastic containers with the number 3, 6, or 7 on the bottom. Instead, look for the numbers 2, 4, or 5 recycle code on them, which means they are BPA- and phthalate-free.

Actually, any toxin that invades our bodies may be considered an Obesogen as they often work as endocrine disruptors, imbalance lipid levels, and mess with insulin, which promotes healthy blood sugar metabolism.  Any of that can lead to any imbalanced metabolism, which can make you gain weight.

O’Bryan has a solution.  He calls it “base hits win the ballgame”.   What do you expect … he’s a guy!  What he’s promoting is little changes … like using stainless steel coffee mugs … that can lead to big wins.

And … yes that’s my kitchen above … with all my flours and other ingredients in glass bottles.  That’s my “fullness doll”, Jerri, perched atop some dried fruit.  She’s also my phone screen saver … I ask her if I’m full when I’m having a difficult time with food.

And, yes … that IS a plastic water bottle back there.  Remember the concept of “base hits”? 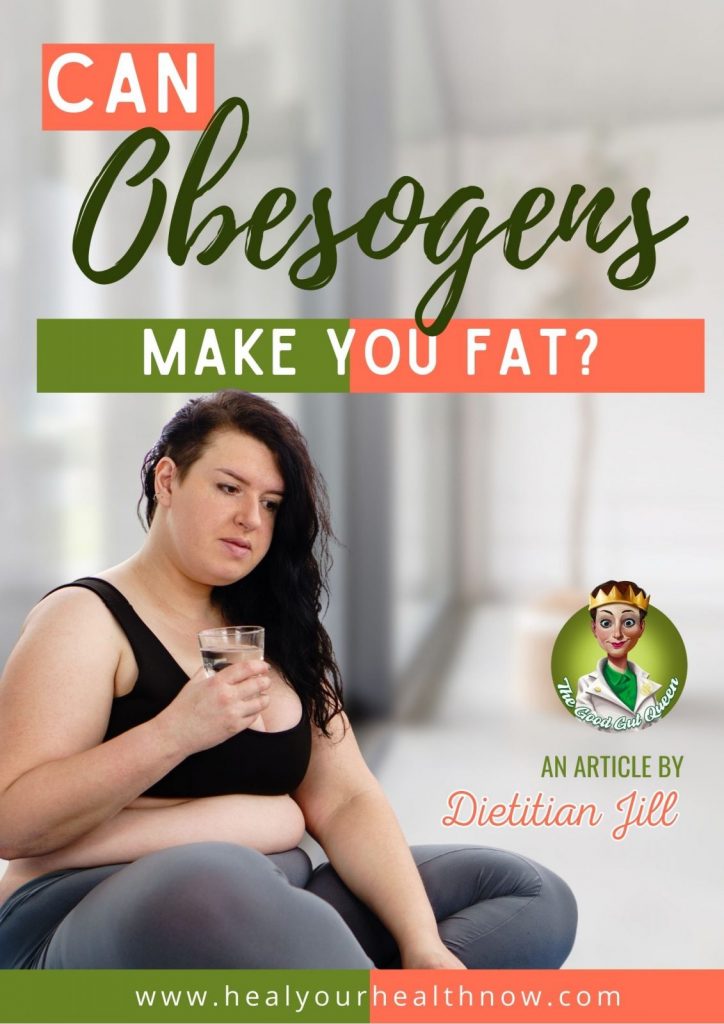