… And Make My (Holiday) Dessert Too!

I published this holiday dessert recipe FOUR years ago as an afterthought in January to a scrumptious Christmas-day dinner I made for a few friends. Now I’m giving it to you beforehand so that you can make these for your own holiday dinner (along with the the recipes I published last week) for whatever holiday meal you’d like.

And, since my tastes and health beliefs have changed over the years, I’m giving you not only my formerly famous dairy-filled pumpkin cheesecake. But updated this article with a Paleo Pumpkin Cheesecake. to equally die for! You choose … and eat them up … FOR REAL!

I’m not a baker. I just watched a segment on CBS Sunday Morning about fanatical cake decorators this morning. I have no desire to do that … sculpting multi-petaled fondant flowers and faux-marble butter-cream urns … even though I find the results of their passions thrilling.

So I ain’t doin’ that! And the big splashy desserts are below. But I’d like to share some alternatives that are on this site. Because I gotta tell you I absolutely LOVE sweets … and ONLY will publish Paleo (or Gluten Free) stuff here …

So if YOU’RE doin’ that … this is the place … Try Paleo Thumbprint Cookies … a holiday staple. Or your might want to try the Paleo Pear or Apple Galette … rustic versions of pie. Another idea … the Double Chocolate Banana Bread is always great … or even Paleo Vanilla Cupcakes with 2-Ingredient Chocolate Frosting.

On with the Cheesecakes …

But … when I make a holiday meal … or just want to show off my ex-chef skills by cooking for friends, I make a cheesecake. It’s a beautiful presentation, makes people OHHH and AHHH, and you just can’t kill it.

So if you forget that it’s in the oven or become preoccupied with yet another chore, which I often do, it can bake a few minutes more and still be fine. I’ve also been making cheesecakes low-fat forever because I don’t want to be weighed down by a truckload of fat and 1000 calories after a hearty meal.

They take a bit of doing … lower temperatures and toppings to mask cracks that usually form at the top … but are ultimately satisfying. Cut the fat even more with something like pumpkin … like in this particular cake … and you slash calories even further as well as beefing up the Vitamin A and C in your diet.

I love pumpkin … and don’t think it’s just for Thanksgiving. I use it all year round in muffins and I carve it out as both a vessel and vegetable for soup.

But its pie-spice goodness really shines in a cheesecake with that winning juxtaposition of sweet and tangy flavors. I even like to add a little Frangelico … hazelnut liquor … to make the tang even more complex. So you don’t even know it’s low-fat.

This makes a HUGE cheesecake. Which is even better as I sent all my Christmas-day guests home with little care packages. So the taste of the day lasts a little longer. And … yes … I definitely save some for myself.

This is adapted from a recipe in Delicious Living. Another great thing about cheesecakes … all you need is to do to make them Gluten Free is to change the graham crackers or cookies in the crust for Gluten-Free ones.

I used Mary’s Gone Crackers Ginger Snaps here. Don’t be daunted by the many ingredients … another great thing I love about cheesecakes is that all this comes together with a food processor or beater. The added texture of beaten egg whites lightens and lifts this one. Bon Appetit!

You don’t have to worry about overcooking this as … like most Paleo “no-cheese confections” … it’s a refrigerated cake. And so very rich that I can only eat a small piece.

Which means more for for care packages. And even more for me! 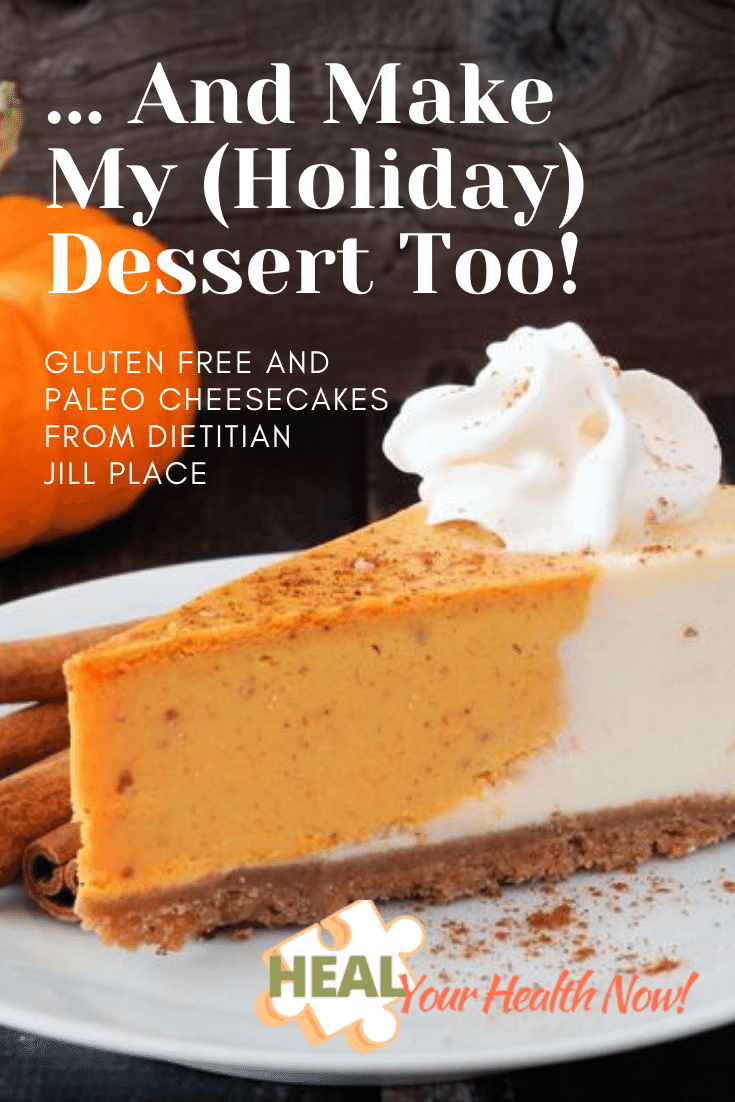