Coconut Milk Does Not a Healthy Diet Make!

Her question about a healthy diet rankled me.  “Is coconut milk healthy?” she said! Typical dietitian me … I launched into a HUGE diatribe about how one food does not a healthy diet make.  And am STILL rankled about it to this day … hence this article …

Blame the Media for this “Is this (name of food) a Healthy Food?” Mindset

So I started to think about WHY we think this way … that if we change just one food in our diet vocabulary that we’ll be healthy.   Truth is we’re bombarded with messages that make lifestyle change seem sooo easy.  Messages that give us one simple solution for very complex health problems.

Messages as misleading as “Kick Candida for Good!” and “Turmeric as Effective as 14 Drugs!” Even my alternative health gurus like Ann Louise Gittleman are guilty of perpetuating this myth; amongst my emails today was one that promised, “Lose 10 lbs in 6 days with this easy metabolism makeover!”

I can’t fault Ann Louise … we leave marketing classes with lists of similar saleable strategies and subject lines.  Or hire people who know how to do them.  Because, in this overcrowded internet, we need to do something standout to catch your eye.

And hey … I’m guilty too … with my “3 Powerful Secrets to Lasting Weight Loss” freebie  (go here to get it).  But I know that what I’ve proposed works.  As does Ann Louise’s I’m sure.  But … let’s face it …changing your health takes focus, commitment, and work.  And we don’t tell you that … at first.

Instead, we lead you to believe with these quick-fix solutions that not only is it all easy-peasy.  But that you just have to tweak some minor stuff to attain everlasting health.  It just ain’t SO!

The Medical Model is ALSO Partially to Blame

I partially blame the medical model for this too. Because our mindset is … take a pill … put the kebosh on a symptom.  So it only makes sense that … when we think of food … we think that one healthy food can masquerade as medicine.

So I guess it’s just magical thinking.  Or that people think that doctors can wave their magic wands and heal you (I have several wands in my session room and, even with my intuitive/energy-healer gifts, I can’t either).

If you ask me, I think we’re just inherently lazy.  And want others to make it happen for us.  Gotta tell you that it doesn’t work that way.

You HAVE you take responsibility for your own health!Click To Tweet

One of my ALL-TIME FAVORITE STORIES …

… about taking responsibility for your health.  I’ve told this it’s gotta be a thousand times.  So if you’ve heard it … apologies.  I never tire of telling it …

Years ago, when I worked in a integrated cancer clinic, in walked a woman with a bandanna on her head … obviously someone going through treatment.  Turned out that she had breast cancer which had spread to the lungs, liver, and brain … a veritable death sentence.

So I was downright dumbfounded when she asked me to help her lose weight!  When I asked her why, she said her husband wanted it.  Then she unraveled this long story about how her family still expected her to be the parent and wife she was before her illness.

It was obvious to me that she was also slowly succumbing not only to her disease but to her family’s inhumane demands! So … I just gave it to her!  I told her to go home, tell her family to “GO F- THEMSELVES” … and take care of herself instead.

You Won’t Believe What Happened!

It was just instinct.  Because I couldn’t believe that she would sacrifice herself for her selfish family.  But I did believe that, when faced with this obviously life-threatening situation, she would find a way out of it.

Three months went by.  And back in the clinic waltzed my girl … peach fuzz regrowing on her head.  She was now totally in remission from her death sentence.  And proudly proclaimed … “I TOLD THEM ALL TO GO F- THEMSELVES!”

So … if you’re wondering if you can reclaim your health … it’s possible.  But, like my patient, you MAY have to go though what I’m sure was not the most comfortable process to extricate herself from her situation.  It took courage, focus, hard work, and an unerring belief that what she was doing was absolutely right.

What Actually IS a Healthy Diet?

I was once a vegan, and got sick with a Vitamin B12 deficiency because of it.  So I went back to eating meat.  And, after much experimentation, I’m now gluten- and dairy-free.  Because autoimmune is on the rise. And it just makes me feel better.

I’m seriously thinking of giving up my wine (sad face).  Because it doesn’t!  And I’m now generally fond my Heal Your Gut Diet … a dash of vegan and uber-paleo.  It and diets similar to it seem to be the popular (and most appropriate) ones today.  You can get my version of it ASAP below …

Why do I think that it’s the best?  Well, the bottom line now is to reduce toxicity from food in an increasingly toxic world.  So buy organic, avoid stuff like gluten, dairy, and processed foods that are loaded with chemicals, and consume stuff that will build a healthy gut.  Something that 80% of us DON’T have.

CHOOSE THE DIET THAT WORKS FOR YOUR GREATER GOOD!Click To Tweet You might consider doing that with everything in your life.  Because eating with joy instead of stress and remorse is as important as choosing cleaner foods.

You’ll notice from my story that it took a long time for me to arrive at my own healthy diet … through trial and error. And, like my patient, it took courage, focus, hard work, and an unerring belief that what I was doing was absolutely right.

Oh … and by the way … I DO think that coconut milk is a healthier alternative to dairy milk.  Y’know … the kind that comes from cows and has been processed to death (pun intended)! 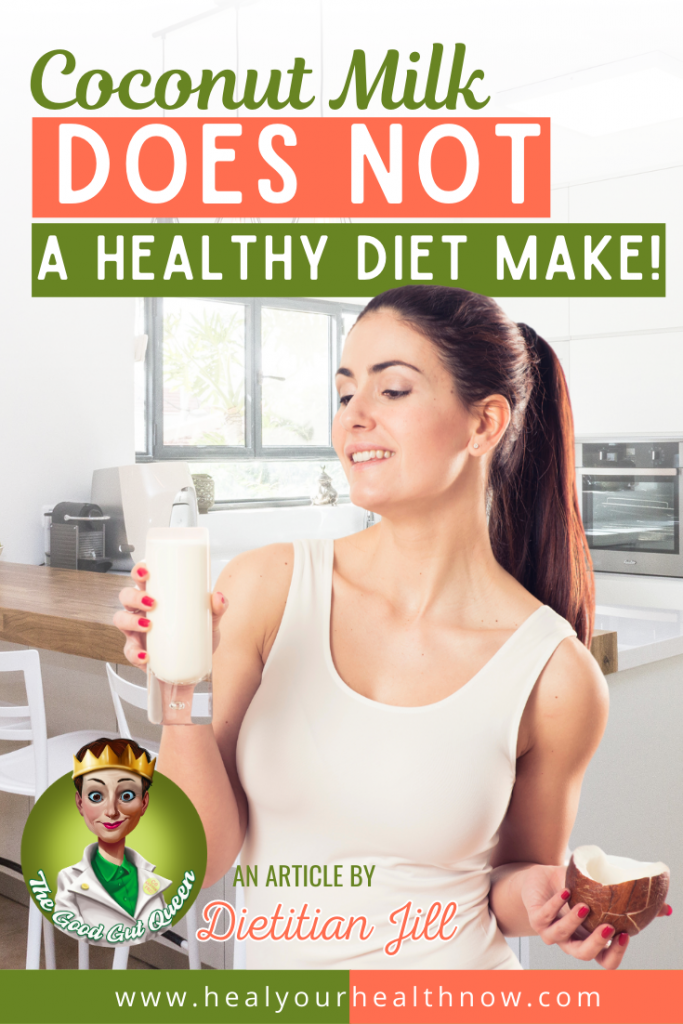