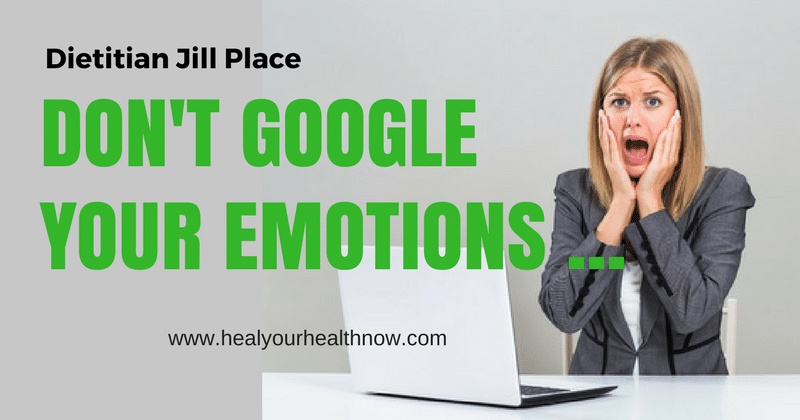 Don’t Entrust your Emotions to the Internet

“I’m feeling the wrong emotions!” one of my most severe eating disordered clients said to me the other day. “I read it on the internet!” I can’t tell you how angry I then became … not at her but at the internet. Because I know that you do need to be cautious when “Googling”. And here are some reasons why:

THE INTERNET:
It’s just opinion. There are many people who know what they’re doing, along with degreed and designated experts, that are providing good content for the internet. But they’re also people out there just putting in their two cents. All of this is just opinion, even the stuff from experts, and may harm you if you have severe emotional and medical issues of any kind. So stop looking for good information there, as it’s hard to know what’s valid and what’s not. And what’s especially valid for your unique situation.

It’s all about visibility. Stuff on the internet is all about making yourself seen. I do it too. And social media is very powerful; after all, it elected a questionable president. In order to be visible, we sometimes stoop to sensational means. Even those of us who know better. I must say I’m continually flummoxed by the nutritional information out there, including something from a famous doctor who has already been chastised by the U.S. Senate (but doesn’t seem to care) that screams “Shed 5 Lbs EVERY Week (Easy To Do)!”. If that won’t grab someone who’s freaking out about their weight, I don’t know what will. Losing weight with potions and pills is neither healthy nor easy and, in reality … IT JUST AIN’T TRUE!

… and profit! Many people who advertise medical and emotional relief on the internet are just in it for the money. Including, I think, the abovementioned doctor. But that’s just MY opinion.

THE CLIENT:
Don’t go there! I advise my clients to never look for answers to their emotional or physical problems on the internet. It sounds very elitist of me, but I am concerned that they will get the wrong information. Especially my eating disordered clients, who might find information, like my client above, that fuels their negative opinions of themselves as well as inflames their disordered practices. And may unravel some of the progress that we’ve made together. Also, as far as medical information is concerned, you see doctors because they can accurately diagnose and prescribe things to make you better. Pure and simple, self-diagnosis of any kind may be counterproductive at best and damaging at worst.

Find an expert that you trust instead. I realize that people are looking for solutions on the internet because they’re there, they’re fast, they’re free, and, most important, they don’t have the money for or don’t see the value in hiring a professional to help. Even a doctor. But the reality is, in MY opinion, that hiring a professional is the only way to solve health problems, especially emotional ones.

I just got a call the other day from an ex-client that wanted me to find her a therapist … she said … “as long as it doesn’t cost too much”. Another reality in our shrinking insurance times is that we mostly have to pay out-of-pocket for some of the preventive support we need. In order to get well, we have to commit to whatever treatment we choose no matter what it costs.

Why? Because we delude ourselves into thinking that we can find the answers ourselves. And that may be true for those of us who have mild problems and need some sort of direction that online information and self-help books may be able to provide. But when you have a diagnosable condition, or even if you find yourself obsessed with food 24 hours a day, it’s time to seek professional help. You wouldn’t put iodine on a skin cancer, would you? No … you’d go to a doctor who can diagnose and then treat it. It’s the same with entrusting your emotions to the internet.

Also, I once was told by an eating disorder professional that “First I bond with them and then they do whatever I want them to do.” I know that too sounds elitist, but it seems to be the most direct path out of eating issues of every kind. If you trust the person … and that trust does take time … you know that what THEY’RE saying is true for you. You then won’t even need the internet.

THE TRUTH ABOUT EMOTIONS:
I’m warning you now that this is going to be a long-winded answer and probably will flow over into other articles. But here’s the bottom line … in bolded all-caps ….

WE NEED TO DISCOVER AND EMBRACE OUR EMOTIONS TO BE PHYSICALLY, MENTALLY AND SPIRITUALLY HEALTHY!

THAT’S the truth. And I didn’t get it on the internet. I got it from acting. I totally feel blessed to have discovered a way to validate my own feelings. Which, as a kid, were always being maligned. “Stop THAT!” became a daily litany from my parents as I either cried, yelled for joy, or exhibited other outbursts that they didn’t understand.

Acting changed all that. The same emotions that I had to eventually hide to be a passable child became prime currency as an actor. In other words, I learned not only about my feelings but, more important that they weren’t just OK … they were prized! It was like a breath of fresh air blowing through the rooms of my mind and filling every corner of them.

But that’s another story for another article. Actually, this article is going to have three parts. In Part Two, I’ll tell you about my story and the life-giving lessons I learned from acting. In Part Three, I’ll give you some of the techniques I actually use with my clients to get in touch with their emotions. And I’m sure you won’t be surprised to know that I got most of them from my own acting training. Until next week …

Leave Your Comments About Don’t Google Your Emotions … Below

What have you “googled” lately? Has it been about physical or emotional health? What do you do to get better?