When I Eat, I Feel So Alone

My colleague said yesterday, “When you were younger, you must have been gorgeous!” Of course, I denied it … as I always do. I am never enough.

That comment sent me on a hunt … a hunt to find the picture above. I was 32 … and had fulfilled my calling as an actress by being a focal part of a children’s theatre troupe.

As well as writing two grants that eventually were funded. One for the first time a children’s theatre had EVER gotten this type of grant.

I was in my prime … too … as a person. I was exercising many hours daily. And looked GREAT (see above) … the best I had ever looked before or since.

I even had a ROCKEFELLER follow me about at an arts conference. And invite me to drinks the first night with the high art mucky-mucks.

Everyone wanted to be my friend there. He was one of the sponsors, and they thought were we together.

But we weren’t. And I never … to this day … ever got over feeling terribly isolated. Even when I was validated by people like him.

I still do to this day … although it’s changing little by little (I’ll explain why in a future article). That’s why I wrote this article three years ago.  So here it is … with updates at the end …

I read this question in a book by SARK today … “How alone do you feel?”. She explained that she writes books “to explain to people we are NOT alone.”

So … do we all feel so totally and irrevocably ALONE? I had to admit to myself at that moment that I do!

And … all at once … the reasons why people closet-eat and hide their eating disorders as well as other imperfections became as transparent as a the triple-pyramid phantom crystal sitting here on my desk. These, as SARK’s book described, … “stumblings, ravings, cravings, insanities, obsessions, stubborn refusals, resistances, complaints” … are those things that we desperately think we have to stuff out of sight from others.

As a result, many of us feel so alone and isolated … that no one will love us if we share our deepest doubts. I certainly did … my whole life. And along with that loneliness and isolation came out-of-control eating … my own hidden secret.

My entanglement with horrible feelings of inadequacy has kept me addicted and stuck all these years. And it’s time to cut those hobbles and walk my authentic path.

As well as slash the strings of my hidden secret. It’s time to come out of that proverbial closet and announce to the world that I’m still obsessed with and addicted to food.

And part of that path is sharing my own story. I guess a lot of it can be summed up in the para-phrase by Anne Wilson Schaef, “Women not only think they are wrong. They think they ARE a wrong.”

No one in my house refuted that; as a matter of fact, that was the message I got not only from my family but all of society. Nowhere in my upbringing was I acknowledged not only as a fabulous female but as a fabulous human being.

I also started life sickly. So I was overfed early. I’ve often said, “I was fed THRICE … once for me, twice for my sister (who never ate and is still skinny and gorgeous at 79) and thrice for my mother’s guilt”.

There are very few pictures of me as a kid because I hated having them taken … the few I have are of a frowning, uneasy, chunky-legged little girl. Fertile ground for disordered eating.

I remember that my jeans were always tight and I felt huge even at a young age. But, at twelve, I prematurely grew into my chest and the baby fat transformed to curves; I was briefly both popular and terrified with boys.

Also, possibly due to the terror, I developed a fondness for red licorice. So, in the years when I was supposed to be attracting boys, me and my growing frame were, for all practical purposes, invisible.

Choral singing and musical comedy became good cover for that terrified girl of growing girth. I had taken singing lessons from the age of 8. But was terribly shy. So getting lost in a group of singing people seemed the best solution.

My parents then sent me to a diet doctor, who gave me shots of some animal urine, pills, and a food plan so restrictive all I recall was the hunger. I lost 70 pounds … and for the first time in my life I was visible.

And being visible, I cried for hours when I shared the then-taboo dream of being an actor with a girlfriend. So, I applied to actor-friendly UCLA and … wonder of wonders … got in!

Tall order for a girl who was still terribly shy and uncomfortable in her body no matter what size she was. My parents advised that I should be a secretary or teacher and go to Barnard or Boston University.

But heeding my actor siren-song, I went West instead … all the while feeling inadequate compared to those skinny blonde-haired angels who got all the roles.

I finally did win leads by my senior year, though. Along with the pressure to be as perfect as I could. Ann Wilson Schaef warned that, “Perfectionism is self-abuse of the highest order.” So that was about when the festering disordered eating behavior kicked into high gear.

I Starved Myself … Literally and Figuratively …

I finally starved myself down another 25 pounds. And proudly posed for a picture in Hot Pants, which were “hot” at the time. Diets, pre-digested protein, more diets, more starving, whatever I could do to be a size-nothing for parts and paramours.

But, even at my thinnest, I could only squeeze myself into a size 6. Even then, I still hated my thighs. NEVER was there a dialogue about loving your body or being enough no matter what your size … not like today. If there was at the time, it was like a Lilliputian faraway peep from a tiny, tiny bird.

Probably because I never DID feel deserving or even pretty, I had a long string of unfulfilling relationships. The man I called “The Love of my Life” once told me I fulfilled two of three requirements for his ideal woman … being pretty was not one of them.

I could only acknowledge that I might possibly have been pretty years after when I saw pictures of younger mes. Years after my stint in children’s theatre, one of the troupe gifted me with a cast picture (the picture above came from it).

I gasped and sputtered spontaneously, “Why didn’t you tell me I was so gorgeous?” In other words, I could never feel pretty … or enough … in my here-and-now skin.

ENOUGH! When am I going to feel ENOUGH!

It’s got to be now because, at 74, I have no more time to waste. Also, I’m TIRED. And DONE! And I think most people that change get to a place where they just don’t want to do their destructive tap-dance anymore.

So, instead, here’s my constructive plan. But I’ll take it down a notch and gracefully waltz instead of awkwardly tap-dance.

I’ve always gone gung-ho making a bunch of changes at one time. And it’s never worked.

So I’m starting with relearning Tai Chi. I’m beginning with a very slow, gentle DVD (2020 update … I did!). And eventually will join a class after I practice the moves a bit (I was a devout Qigong practitioner until late last year when my teacher moved to Portland) .

Daily journaling is already in place (off and on … now on). And an exciting inner way of eating to my hunger that I’m toying with … and will explain it all to you in the next article (it’s my “Are You Weighting?” plan … now years long and strong).

I also realize that I HAVE to tell the people I love them before they shuffle off … (excuse my Shakespeare quote … a byproduct of my theatre master’s degree) this mortal coil. I have … and they, fortunately, have returned the favor.

To hope and dream is not to ignore the practical. It is to dress it in colors and rainbows.
~ Anne Wilson Schaef 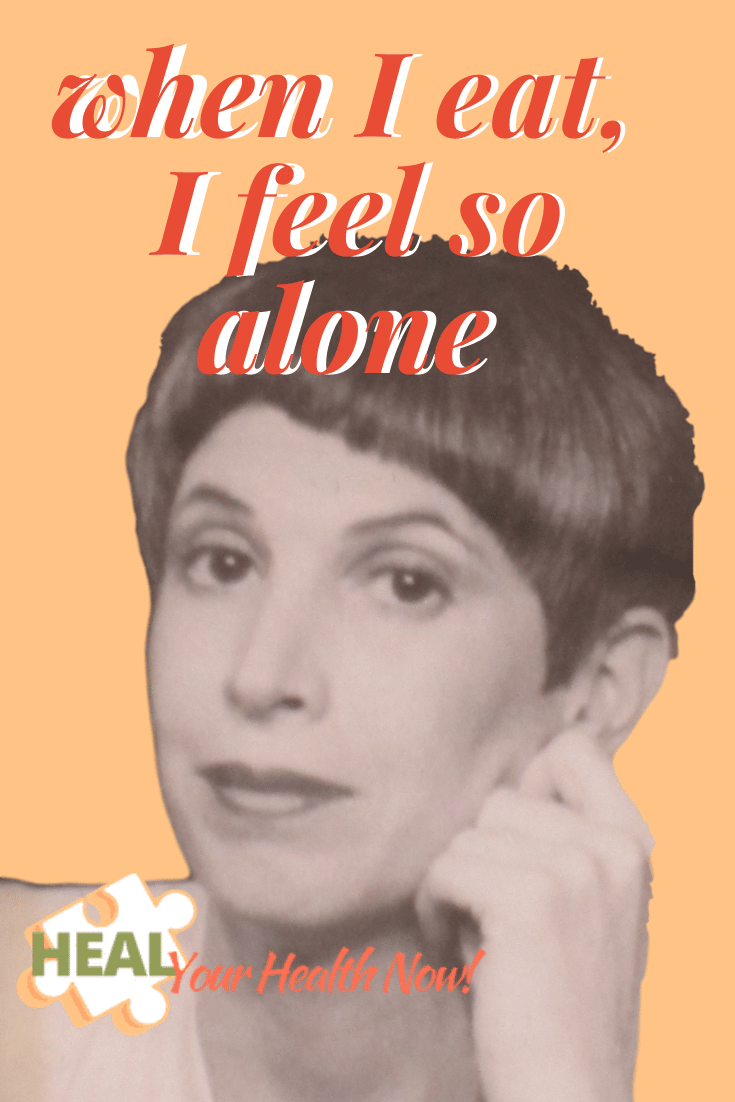