This is Your Body on Fear

An egg sizzling in a frying pan and a voice from the void  … “This is your brain on drugs”. I’ve never forgotten that 1980’s TV ad.  I’m sure it was because of its bold image. So … the boldness of broken Barbies above became for me another daring image. One that showed quite vividly “This is Your Body on Fear”.

The egg-frying drug ad increased consciousness of the dangers of cocaine for teenagers by 10%. “Let’s go fry an egg” became slang for using. And that image still simmers in my own brain over 30 years later.

These torn-apart Barbies … the “ideal woman” whose bodily dimensions make it impossible for her to stand up by herself … really struck me as equal parts truth and shock when I was searching for a vivid image for your body on fear. And … as in the original ad … I’m going to ask, “Any Questions?”

Why am I talking about and showing this to you now? Well … fear and anxiety are rampant in our Coronavirus times … as if you didn’t know!

How Fear is Affecting Us …

I’m one of the happiest people I know. But I was sharing with a friend the other day that I’m having mental sparks of depression. “Like flashbacks, ” she asked, “almost like PTSD?” I had to admit that it was so.

“There’s never been a time in modern human history when every person is seriously worried about the same thing at the same time,” said David Ropeik, a former instructor in risk communication at the Harvard School of Public Health. And we’ve never before been able to instantaneously broadcast this type of panic to every man, woman, and child either. Everywhere.

News media spits out scary information 24 hours a day. One colleague of mine said she couldn’t stop watching it … I hope she’s gotten over that obsession. The reality is … though … that we’re hardwired to remember negative information instead of positive.

The reality is … too … that most people who contract COVID-19 show mild symptoms. Or none at all. But we don’t … as human beings … celebrate any of that.

I just saw an infectious disease doctor talk about the fact that we're so much more ahead in combating this epidemic than we were with AIDS. Did anybody HEAR that?Click To Tweet

Instead … we focus on death and grief statistics and not knowing a simple or definitive solution for the problem. Which stews up the pot of fight-or-flight far and stress  (modern society has already done that to us anyway) more than usual. Which can kick off …

If you’ve just eaten … and your digestion response grinds to a halt … where does that leave your gut? Not good.

So you're able to quickly flee the snarling, growling sabre-tooth tiger. But now the tiger is COVID-19. And your reaction is heartburn. Which can lead to digestive problems like leaky gut.Click To TweetOr does leaky gut cause heartburn? Chicken or the egg?

Doesn’t matter. Prolonged fear and stress can lead to leaky gut. And … if you remember that the immune system is one cell below all that leaking … a crappy immune system too.

The same immune system we’re trying to strengthen to fight COVID-19. How  counterproductive is that?

A Lack of Laughter

Fear can make us glum. Or giggle … which to me is a poor substitute for a real belly laugh. Laughter is not only the “best medicine” … it’s been solidly researched as contributing to our well-being.

Life … especially one where face masks have become fashion statements (I ordered  two with fruit motifs yesterday) … is kind of absurd.  So when you feel overwhelmed, try to see the absurdity in things.

Many people are also posting funny things to laugh about online. Even goddess woman Meryl Streep was on Facebook the other day doing something hilarious with one of my fave musical comedy songs and a bottle of scotch. Without laughter your fear can also reach epidemic proprotions.

I’m a huge fan of Sex and the City. I must binge-watch the whole series at least once a year. Especially an episode where the main character, Carrie, was … as she said … “missing the bride gene”.

To reduce her pre-marital jitters, Carrie and her pregnant girlfriend both jokingly tried on wedding dresses at a “horrible” bridal shop. Almost immediately … Carrie became distressed and begged her friend to rip off her dress.

Which revealed huge red welts on her back. Carrie’s horrified friend then exclaimed, “Oh my god, what just happened?”

The body is an amazing mechanism ... its 'red flags' that fear and stress have become too much can be anything from gagging to welty hives. When the immune system becomes weakened due to fear, anything can happen.Click To Tweet

A Lack of Sleep

Trying to fall asleep when you’re anxious or afraid is almost impossible. When your body’s getting ready to run away, it’s hard to settle it down.

As long as your body is pumping out stress hormones, you probably won’t be able to sleep. And lack of sleep can also make you cranky, poor-performing (both at home and at work), and humorless to boot.

I take L-Tryptophan (5-HTP works better for some) every night. Or Melatonin. Or play some mindfulness on the phone. All lull you to sleep without drugging you … or tearing you apart.

This type of exhaustion is not just from not sleeping. It’s from doing things to distract yourself from actually FEELING afraid. And that can make you exhausted.

I love my sister but I’ve never seen her kicking back. She’s always distracting herself  by knitting, reading the paper (yes … my generation actually DID that … and not on a tablet), running to events, playing golf or tennis, talking on the phone, and always walking away ( I have many pictures …). And her new thing is million-piece puzzles (I can’t do puzzles for more than 5 minutes …).

It’s her lifestyle … she’s 80 … and obviously not going to change anytime soon. But she poops out before 9pm. So if you notice that you’re filling your days with meaningless activity, it may be that you’re distracting yourself out of fear.

It might be time to ask yourself some hard questions like “Are you filling your time with distractions like social media?” Or even … more pointed … “What are you afraid of right now, ____ (your name)?”

Research has shown that addressing yourself  in the third person is more comfortable that using “I”. Also … you’ve probably got a little more time right now; even working in the trenches, I’m not going to restaurants or dawdling over dusters at Nordstrom’s.

So take some time to breathe and be with yourself. I’m so grateful that my fabulous Qigong (early Tai Chi) teacher, Trace, is doing classes online by donation right now … I’m up to three a week. And there are always rejuvenating resources like my Micro-Mindfuls or apps like Calm (7-day trial … yearly fee … NOT free) and Buddhify (small app cost … free). RELAX!

Exhaustion and distraction can take their toll. Would you believe that I actually took TWO baths one morning? YES, I DID!

You may be one of the lucky ones who still has your job. But all of us are working under difficult conditions … and that alone may make it difficult to focus.

If you’re a shut-in or working from home these days, increasing stress transitioning to a very different  environment with tons of distractions (the kids … who are also home … are screaming … and so is the fridge), may make thinking clearly and staying on task difficult.

And if you’re NOT working … well … you’re probably the one that’s the most fearful of all.

Fear, then, fogs up your brain. In the cancer community we called it “chemo brain”. Now … we might rename it “fear-brain”.

So take some time to address your overwhelm. Do something for yourself … some mindfulness, working out, and by all means, getting away from the kids for a stretch. REFRESH!

I must admit that I love my wine. And have had a terrific palate since my cheffing days. My friend, Tom, who once owned a wine shop, once told me that women have the best taste buds.

And glossing over feelings. That’s one of the reasons why people are addicted to just about everything. To get relief  from whatever’s bugging them.

Unfortunately, all this self-medicating may lead to addiction. And a lot more problems than a sip of wine, a hit of a joint, or a roll of the dice.

I’m buying less wine these days. And limiting myself to two small glasses when I do drink. Which is not every day.

I’ve had to make rules for myself to make sure I don’t over-imbibe. Or overeat either.

So … to sum up … minimizing fear all boils down to being more aware. And taking breaks to rest and refresh when you get overwhelmed.

Most of all … acknowledge your fears and feelings. And don’t be embarrassed to share them with people you trust.  If you need professional help … it’s online now.

DON’T end up broken like Barbie … in body, mind OR spirit. 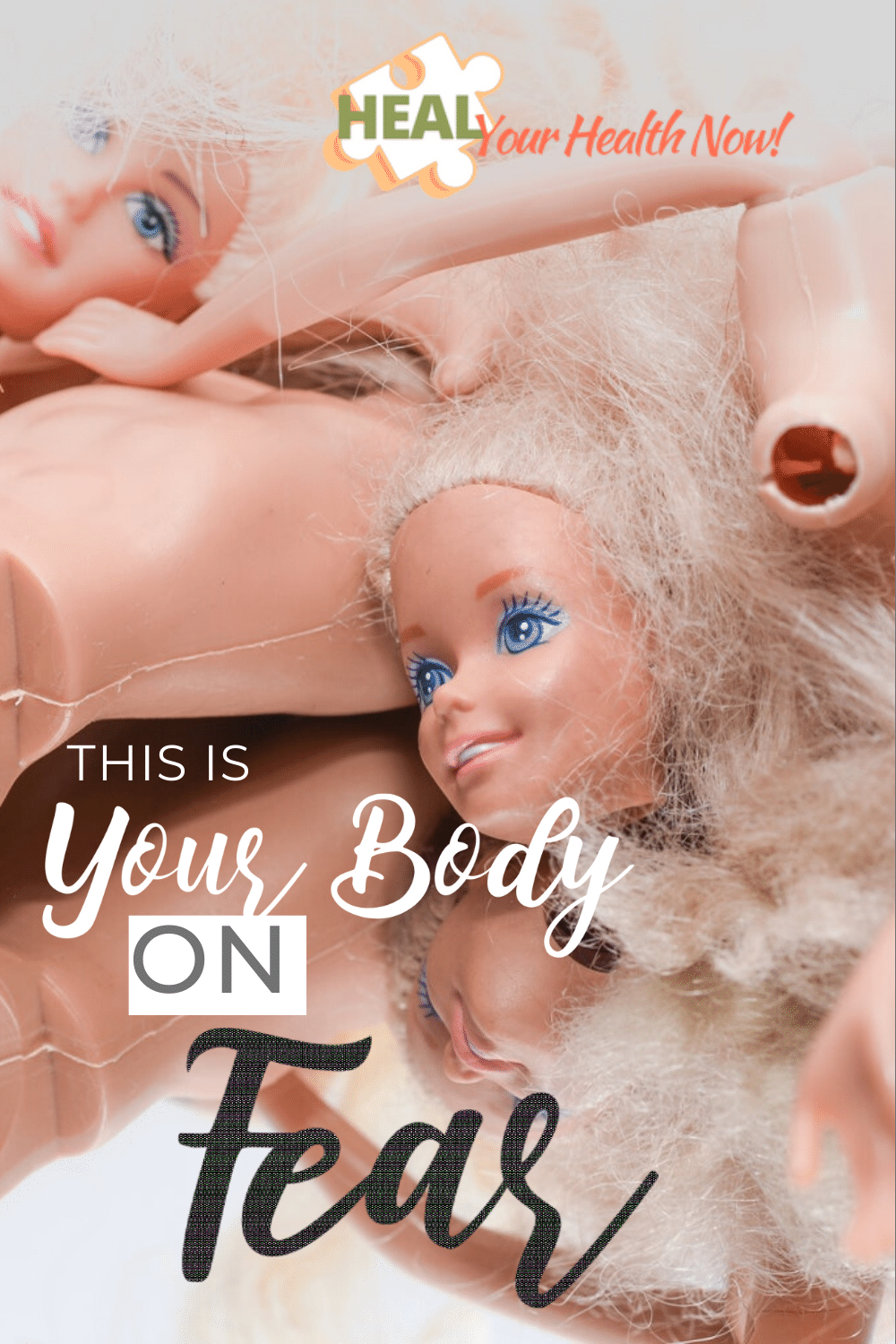