In Defense of Food Sensitivity Testing

I saw red, cymbals crashed in my head, and I wanted to run right out and buy a pitbull (and I’m 50 years a cat person!)  All I could conjure up was that this article was wrong … wrong … WRONG!

The article I’m referring to is the one here … a scathing expose on food sensitivity testing.  Written by a fellow Registered Dietitian.

In it, she sums up by saying “Don’t waste your money on unproven ‘food sensitivity’ testing. Instead, maintain a record of the food(s) or dishes that seem to have provoked symptoms for you in the past.”  And notes culprits like histamine intolerance (a big health buzzword today), tyramine, and enzyme deficiencies as causes for problems that she treats.

I could barely get through the article as it was peppered with links to other things like “8 Food Combinations to Embrace (and 3 to Avoid)” (the dietetic association did away with the concept of combining in the 1990’s), “Foods that Cause Bloating”, and Jenny Craig ads.

I looked up the dietitian in question.  She works with a doctor … a gastroenterologist.  And seems dead set against any interventions that go beyond the medical model. Or just diet changes.

I’ve read other similar scathing exposes by dietitians and others.  Exposes that are a reaction to the groundswell of those who are seeking out alternative means of health treatment.

Reactions to the definite change that is happening in healthcare.  Similar to the reaction that happened in this country when the now-white now-minority … out of fear and perceived loss of control … wanted a political change.  And look what we got … Trump!

Still Waiting for the Groundswell …

The reality is that alternative healthcare hasn’t yet “trumped” traditional medical avenues.  But appears to be growing and thriving with those of us that realize that the medical establishment is just not cutting it when getting to the root of what’s causing our ills today.

The sad truth is that traditional medical intervention can’t treat the growing scourge of autoimmune issues. Autoimmune disease is the number one direct and indirect (as many diseases, such as diabetes, are now considered autoimmune) cause of current health problems … affecting approximately 50 million Americans.

20 percent of the population, or one in five people, suffer from autoimmune diseases (and I think that’s a conservative estimate as they’re only counting those that actually seek treatment). Women are more likely than men to be affected.

Some estimates say that 75 percent of those affected–some 30 million people–are women.  The women that Trump wants to deprive of abortion rights too, thus setting back their path to equality 50 years.

The other sad truth is that the medical community, who sometimes takes 20 years to adopt new practices, is sadly behind the times when it comes to autoimmunity.  There are even doctors that don’t believe that inflammation is the root cause of disease.

The fact that inflammation causes disease has been well-researched for over 25 years now.

I have a 2004 cover of TIME magazine over over my office desk with a HUGE headline, 'THE SECRET KILLER ... the surprising link between INFLAMMATION and HEART ATTACKS, CANCER, ALZHEIMER'S and other diseases'.Click To Tweet

One of my current client’s lives has unfortunately been severely compromised by medical intervention. By massive doses of antibiotics given her to treat a condition brought about by a reaction to yet another medication.

She texted me recent labs I recommended that medically confirmed that she had Hashimoto’s Thyroiditis … an autoimmune condition.  Her doctor’s response … “take your thyroid medication and read ‘The Plant Paradox’”.

I was not familiar with the book.  Turns out it’s yet another trendy turn by some MD who, of course, knows the number one answer to why you’re sick and overweight by dint of his weighty credentials.

Oh wait … aren’t doctors supposed to write about well-researched medical interventions?  My take as a nutrition professional … neither the author of the book nor my client’s doctor know anything about the healing power of food and nutritional supplements (and most doctors DON’T!)

The person who wrote the review I read on the book agreed … and postulated that the concentration on lectins as the single (and NOT well-researched) problem for all our ills was a bunch of bunk.  And that the main reason why people did well on the diet was that it shunned processed foods in favor of organic ones.

untested theories recommended by one doctor because the person who puts them forth is yet another?  Because being a 'weighty' doctor absolves all theories of their questionability?Click To Tweet

Is what I do any less valid because I don’t possess those credentials?  The medical community often argues that alternative health solutions are bunk.  But isn’t this kind of the same thing?

I Proudly DO Do Food Sensitivity Testing …

So I’m proudly proclaiming here and now that I DO use food sensitivity testing … LEAP Mediator Release Testing (MRT) from Oxford Biotechnologies to be specific.

I’ve used it for over 10 years for one reason.

Lives have been radically changed for the better using LEAP MRT testing.  Lives that seem to increasingly be not helped by traditional medicine.Click To Tweet

People come to me every day with stories like the client whose plight I outlined above.  Many people.  The medical model has unfortunately failed them.  For many, I recommend food sensitivity testing.

Why? Many get better because avoiding sensitive foods reduces inflammation.  Which allows the body to heal itself. They’re also treating their own individual differences … an increasingly favorable concept among practitioners.

And they’re also eating non-processed, mostly organic food. Something that the reviewer of “The Plant Paradox” noted as the primary reason for people having positive outcomes on that plan.

How the Testing Works …

I also noticed that the RD author encouraged “a food record”. I’ve found those totally useless as true food sensitivities are DELAYED reactions to foods and impossible to pigeonhole with “food records”. Trying to do so can leave you frustrated and possibly feeling worse than when you began.

Also, she mentions IgG testing, which I find useless too. Many of my colleagues would disagree with me, and they … like the doctor above … are entitled to their opinion.

Here’s a simple explanation (and accompanying article) of how MRT works. If your white blood cells “shrink” when exposed to a food antigen in the MRT test, it causes a change in the solids (white blood cells) to liquid (plasma) ratio of your blood sample. An antigen is a toxin or other foreign substance which causes an antibody response in the body.

This response is considered a reaction to a specific food. When your white cells, therefore, shrink, the reaction suggests they’ve released chemical mediators, such as histamine and leukotrienes, that could cause symptoms in your body. And worse.

My final take on this whole thing … everyone’s entitled to their own opinion.  But me … I just want people to get better (and my client is) instead of being prescribed yet another medication that doesn’t work for them.

Or swallowing some gobbledygook by some MD who knows little to nothing about nutrition.  And just wants to sell diet books.

Do I think doctors are important?  ABSOLUTELY!  But I think they’re sometimes selling a lot of current, pervasive conditions short by treating them with often-antiquated or possibly controversial suggestions.  And it’s time they woke up to new ways that DO work!

As far as LEAP MRT is concerned, we registered dietitians who do it have literally THOUSANDS and THOUSANDS of anecdotal, REAL case studies (check out the tons of testimonials on my website and the LEAP MRT board on Pinterest).

REAL case studies of people whose lives have totally turned around by identifying food sensitivities and building an elimination diet around them.  And a REAL research study is currently underway.Click To Tweet

Me … I’m sticking with LEAP.  And other testing that gets to the root cause of what ails people.

As someone who took the time to become an expert in my field … both through traditional university and alternative channels, got several certifications for both, and have over 25 years of REAL experience treating people, I’ve seen results.  And that’s what all that schooling and experience is REALLY all about anyway. 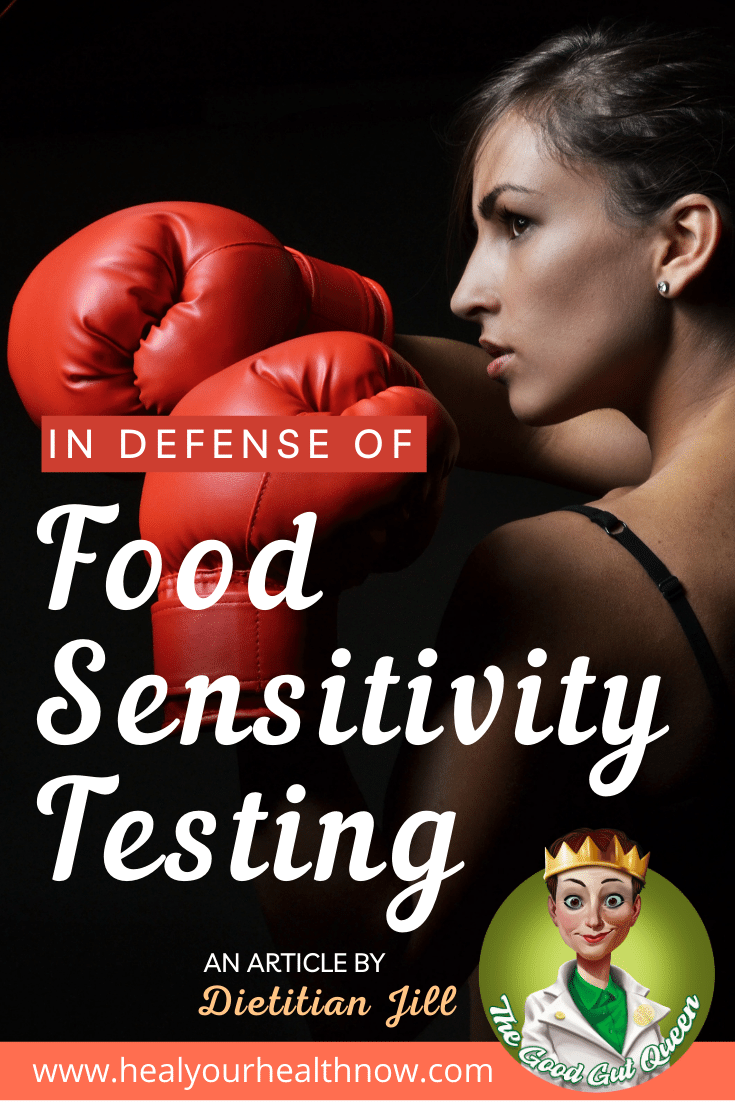