If you didn’t already know, I wrote a book on going Gluten Free.  It’s called Gluten Free in 5 Days and it’s available on Amazon (hint … hint … get it here.)

In it, I advised that, if you wanted to know if you were gluten intolerant (according to research, up to 60% of us are) just try no gluten.  And told an actual story about a guy who followed me in Whole Foods (no … he didn’t want to pick me up).

He had gone Gluten Free because a friend did.  I asked him if he felt better.  When he said “NO” I advised (I do a lot of that) … “Then stop it!”

Like the advice (there it is again!) I gave this random meet-cute, that was my mantra for the book. Along with another idea. That going gluten free wasn’t necessary UNLESS you had celiac disease or were gluten intolerant.

Even the editor of my book approved. She said I “was obviously knowledgeable” and the she “learned a lot”. But also stated that I wasn’t militant about going gluten free.  And found that idea “a welcome breath of fresh air!”

My stance in the book was fueled by some research that stated that up to 60% of people are gluten intolerant. Which was  almost blasphemous at the time (and still is) as the medical establishment (my favorite people) often posts that you need to go gluten free ONLY if you have celiac disease (they still do).

But now I think otherwise …

Beloved health guru Tom O’Bryan explains this quite well (he often does) by painting a picture of your gut on gluten. He broad-stroked the idea that ANYONE who eats gluten has a compromised gut.

He described that, whenever you eat gluten, it rips your gut.  Fortunately, the cells of the gut all regenerate in 3 to 5 days or so.

But continue eating gluten and you lose oral tolerance.  Which results in the leaky gut that 80% of us now have.

It reminds me of the ’80’s (now revamped with an also anti-racial slant) anti-drug PSA “this is your brain on drugs”.  And research has even borne out that drugs actually sizzle your brain.

In reality, research has done the same with gluten.  A landmark 2015 study by Hollon et. al. came to this conclusion …

they tested people in remission from celiac disease ... those who avoided gluten ... as well as gluten sensitive and normal individuals ... and found that ALL of them had compromised guts after eating gluten.Click To Tweet

Another study by Unde et. al. reinforced the gut-compromise hypothesis by stating that “These findings reveal a state of systemic immune activation in conjunction with a compromised intestinal epithelium affecting a subset of individuals who experience sensitivity to wheat in the absence of celiac disease”.

Of course, this research was done with gluten-sensitive individuals.  But, since up to 60% of Americans have that, we’re talking about a subset of most of us.

The study was summarized by another researcher in this way …

These results shift the paradigm in our recognition and understanding of non-celiac wheat sensitivity and will likely have important implications for diagnosis and treatment… Considering the large number of people affected by the condition and its significant negative health impact on patients, this is an important area of research that deserves much more attention and funding.

In reality, our whole world is contaminated. That's why is more important than ever to avoid gluten.Click To Tweet

We all love bread and other grains.  But the bread we eat today isn’t the kind that grandma grew up with.  Or our grains aren’t those wild ones we first tamed 10,000 years ago.  And here’s what current research seems to suggest:

We have mutant seeds, grown in synthetic soil, bathed in chemicals. They’re deconstructed, pulverized to fine dust, bleached and chemically treated to create a barren industrial filler that no other creature on the planet will eat. And we wonder why it might be making us sick?

Where I’m at Right Now About Gluten …

I don’t know about you, but when I heard  about the Hollon study, I started to rethink how I felt about gluten.  I’ve been Gluten Free for some time with small forays into dim sum (the best restaurant in the city is a scant three miles from my house … and my particular waiter always seats me in the corner and has my white wine waiting).

But I always suffer … I breathe more poorly the following day.  And seem achier and more in need of probiotics too.

Fortunately, the discomfort is short-lived. Remember that the gut regenerates quickly.  But, at my age, even with the best probiotics (talk to me if you want to know which one …) and the prebiotic foods and  chewables I just got yesterday, I don’t want to lose oral tolerance.

Want to start down the path yourself? I’d suggest this Heal Your Gut (Almost No Cook) Menu.  Going Gluten Free is an integral tool for healing your gut. Get it here … 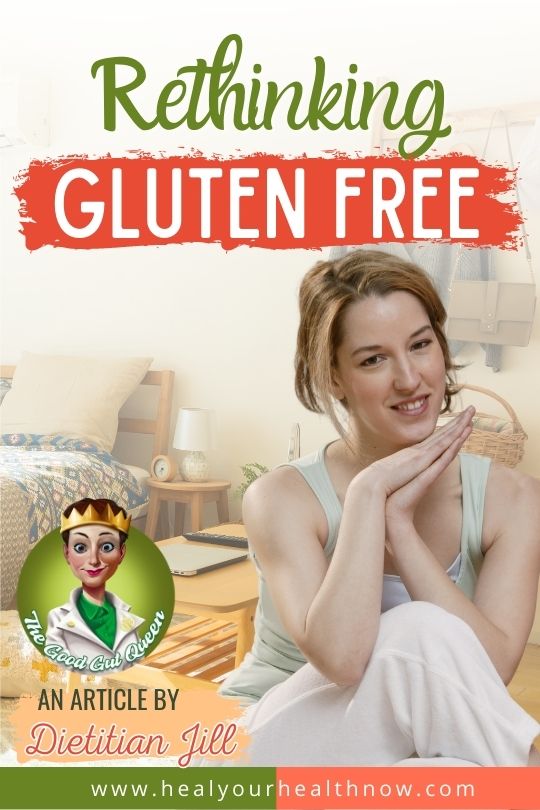