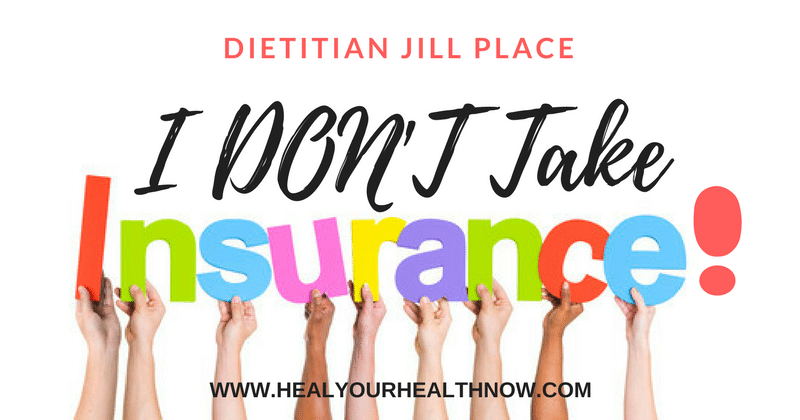 If You Want Wellness, You Have to Pay for It

She hung up on me yesterday.  And never called me back.  After I told her that I don’t take insurance for weight loss or wellness.  That’s not an abnormal occurrence.  Although the hanging-up part was a bit harsh.

I have to tell you that I’ve written several articles about this.  And still people call me every day expecting insurance to pay for everything health-related they can conjure up.  Even when I advertise myself as a cash-only practice.  There must be some magical thinking afoot here I think.  Just like many people hide their eyes in the presence of their finances, they must be wearing major blinders where health care costs are concerned.  Blinders that are painfully ripped off when one is faced with a major health crisis.

I broke my ankle badly seven years ago.  At the time, pre-Medicare, I was paying almost $400 a month for good health insurance with a doable deductible (would it cost $800 to $1000 now?).  The whole ankle thing cost me $30,000 … the down-payment on my future house.  I even had to negotiate down the emergency room docs, who were dumfoundingly not covered.  Here I am, in shock, with a flopping foot, signing a bunch of papers I could barely comprehend just to get treated.  I also surprisingly had to pay for my commode and walker.  It all added up.  I don’t know what I would have done if I hadn’t had savings.  Because most people don’t.

And that was for a catastrophic, coverable injury.  So I don’t know how people can think that losing weight is a payout priority.  Or any type of alternative therapy for that matter.  Several of my functional labs take insurance.  But the co-pay clients remit just about covers the wholesale cost of the test anyway.  As does the upfront fee for my food sensitivity plan.

So I was curious.  I “googled” “Does insurance cover dietitians?” and came back with loads of platitudes about how it saves money and should be covered, a lot of “iffy” answers from companies, and one definite “NO!”.  Medicare, however, does pay for those with diabetes and end-stage renal disease.  And most say that they cover a dietitian when you’re in the hospital.

But most of my clients aren’t in any of those categories.  And I know from experience that outpatient insurance visits are limited.  So continuity is out of the question. The curious bottom line … a quote directly from this research … “Unfortunately, most insurance companies do not cover nutrition counseling but, fortunately, more and more insurance carriers are now seeing the advantages of seeing a nutritionist”.  So do they pay or what?

I think not for any type of wellness.  Let alone the fact that, as you can tell from my ankle story, health insurance barely covers the cost of anything that’s actually necessary.  I even tried to charge a client’s  wellness account … one set up exclusively for alternative practitioners like me … the other day, and now have to sign a paper touting my own medical necessity.  JEEZ!

There have also been a couple of instances where insurance said they’d pay and then tried to reneg.  DOUBLE JEEZ!  One even paid me and then told the client she’d have to pay over a thousand dollars back months later.  It took a lot of screaming on my part … and that of my clients … to worm the money out of them.  Is it any wonder that I’ve abandoned all hope of collecting altogether?

I’m proud to say that I’ve joined the ranks of the cash-only, along with my long-standing chiropractor, Oxford Biotechnologies, the lab that does my food sensitivity testing, and many others.  Yes, my practice is much smaller than I’d like it to be.  But at least I’m not messing with forms and phones that take the focus from my clients and learning further about what works for them.  Unfortunately, the reality is that you’ve got to have money to get treatment.  And many just can’t afford it.

But the reality is also that you may spend a bunch of money on things that don’t ultimately work, such as the latest trend or supplement.  I’ve had people come in to sessions with bags and bags of supplements … $20 here, $10 there DOES add up, even if you spend it in smaller increments.  What’s in those bags and bags possibly adds up to a food sensitivity test, which may alleviate the core problem that all those supplements can’t.  Magical thinking hard at work yet again.

So here’s want I want you to remember.  Prevention does work.  Many, many studies have shown that it does.  But we’re strapped with an ever-more-costly healthcare system that only deals in sickness, not wellness.  As my research and experience has shown, insurance pays little or not at all for positive things that you’d like to do for yourself, like lose weight and get healthier.  It definitely doesn’t pay for supplements or most alternative testing and treatment.  Also, behavior change takes lots of support and time … time that costs money if you’re working consistently with a practitioner or health coach.

I also want you to remember that, in our ever-increasingly polluted world, so many are faced with toxic-overload problems such as Irritable Bowel Syndrome and autoimmune disorders, that can’t ultimately be helped with a pill.  You have to treat, unburden, and subsequently heal the system, not the symptom.  And that takes an expert.  I’ve literally read thousands of success stories from people who have gone through this healing process.  As well as witnessed it with some of my own clients.

It’s not that doctors aren’t valuable … I wouldn’t trade the guy that fixed my ankle for all the money I’ve paid for alternative treatments over the years.  But there ARE treatments for certain things that can be better remedied alternatively.   And all those alternatives are only out-of-pocket.  It’s just the way it is right now.  We hope that “more insurance carriers are now seeing the advantages of seeing a nutritionist”.  I’d love to see it in my lifetime.  I just don’t know.  At least I’m tax-deductible.  But my final advice is … SAVE UP!

Leave Your Comments About I DON’T Take Insurance! Below

If not have a story about expecting insurance to pay for something that it didn’t, please share it here.  How much do you pay for health insurance;  do you think it’s too much?