Are You Weighting? Part Two 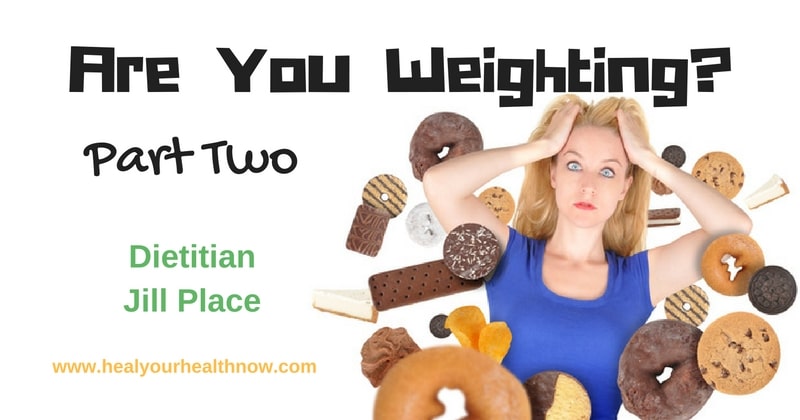 OK … I’m sure that you’ve been waiting on tenterhooks for my next pearls of wisdom (LOL). And you may be surprised by my next idea, which is …

Give Up Weight Loss.
Yes, that’s what I said! I lose more clients over this. Because they think they’re coming to me to lose weight. That’s why I call “Are You Weighting?” DIET-LESS weight loss. Because the reality is that you don’t lose weight at first … you lose weight AT LAST! HUH?

Here’s the deal. Your self-worth is not about a number on a scale. Or what size you can wear. You’ve tried that. It didn’t work. You know that. How many diets have you been on where you felt deprived? Or “cheated” (I hate that concept … is it because we’re obsessed with Original Sin that we like that idea. I studied Eastern spirituality … no original sin … just a journey toward greater good) when you felt deprived?

We have made things that are supposed to nourish and nurture us into bad guys. That shouldn’t be. Just because someone came up with some ideas a hundred years ago? That we’re still batting around? When you give up the idea of weight loss for the better idea of healing your relationship with food … and with yourself … damaged by outmoded and unworkable concepts … that’s when you can actually lose weight. If, by then, it matters to you. To many of my clients, the idea of super-slimness is something they don’t even think about anymore. Instead, they accept themselves for who they are. And, when YOU do, the miraculous thing is that you lose weight. That’s why it’s so important to …

Deconstruct Your Ritual.
We all have rituals around eating. Perhaps we eat at certain times certain things with certain people. Or sneak food if we have a more disordered relationship with it. I can one client who, as a child, bought a pound of spaghetti and a jar of sauce on the way home from school. He ate them and then put the evidence into a crack in the basement wall. Then there was a fire in his house, and his parents found all the jars. But that didn’t help him with his disorder; he weighed over 450 pounds when we first worked together.

So we started our journey together by finding out exactly what he did with food. It’s a process that’s often shameful and painful. But honesty is necessary. And working with someone who won’t criticize what you do. I didn’t have the tools then to do this in a simple way. So he kept food written records, recording times he ate, what he ate, and … most important … how he felt when he ate. So that we could see patterns in his eating.

These are called rituals. Having rituals is part of being human, and many of them these days are around food. Seeing them for exactly what they are can help us find new ones.

That’s why I love the phone app, “mySymptoms”. Originally made to record the intensity of physical reactions to food, it also can be modified to include feelings … I included new symptoms such as “Anxiety”, “Hunger”, and “Depression”. There’s also a place to record your stress level as well as a way to include notes if you need them. In this way, you can really see your eating lifestyle for what it is.

Find New Rituals.
This is the hardest part of the process. Because food is such an ingrained ritual that it’s difficult to change it. I just had a conversation with some people I work with today. People always ask me, “how can I lose weight?” My reply is always, “eat less of what you like”. Sounds simple, but is often a tall order. Because most of us ritualistically overeat or have other ingrained behaviors around food.

One of my eating disordered clients is doing a great job at introducing new foods and new behaviors without practicing her old destructive ones. She still obsesses about these old ones but is consistently reminding herself of the “big picture” … what she really wants to do … which is healing her relationship with food and putting to rest a life that solely revolves around eating.

But it’s often not easy. She has found herself in the car on the way to the market to buy her binge foods more than once. And only her desire to do things differently guided her back home. I’m always recommending the book, “50 Ways to Soothe Yourself Without Food”. Because you have to find a new ritual … sometimes several … to replace your old ones. And do it every day … sometimes many times a day. Because you’re the only one who can pry the cookie dough out of your hands at 2AM.

Talk to the One Who Overeats.
This idea, too, deserves an entire article. Because we seem to have a part of us that’s splintered off from the rest that grabs cookies by the handful and stuffs them into our mouths. Suffice to say, we’re not very fond of this part. As a matter of fact, one of my clients actually threw hers out of the car once. And we had to do guided imagery to go back down the road and pick her up again.

We not only have to make friends with this part of us, we have to learn to love it. Because that part is usually our “little kid” who didn’t get enough of something and uses food as a substitute. Most of the time, it’s not being noticed for who we truly are. So our journey back is usually first acknowledging this part, finding a way to love it, re-parenting and helping it grow up, and then finally reintegrating it into our psyches. Then and only then will your “little kid” stop using food to soothe its hurt.

Leave Your Comments About Are You Weighting? Part Two Below

What eating rituals do you have? Do you often feel like someone is sabotaging your weight loss efforts? What would happen if you gave up the idea of weight loss?