If you’ve taken the test we published last week, and can’t wait to know more about your eating person-ality, here are the explanations of each.  If you haven’t taken the test, go here to take it now.

If your answers are mostly “1’s”, you are a … Perfect-Eater

This may sound like a terrific thing, but no one is perfect and a “perfect” person-ality is one that borders on disordered eating.  Because this type of eater agonizes over every calorie and every food choice.

And depends less when choosing foods upon what they want to eat than on calories, carbs, fat grams, and other nutrition information.  As a matter of fact, most “Perfect-Eaters” have no idea of what they actually like to eat.

In reality, these person-alities are trying to exercise control over an uncertain and possibly perceived hostile world.  That’s why it’s often difficult for them to eat out in a restaurant as they have little control over what’s in their food there.

They often also dislike … and sometimes even hate … their bodies for not being perfect, and also misjudge their body size. If this is your primary eating person-ality, I’d suggest you seek the help of a therapist or dietitian that understands how to treat this.  It can become a serious problem.

If your answers are mostly “2’s”, you are a … People-Pleaser-Eater

These person-alities can also be called “insecure eaters”.  They have great difficulty feeling good enough or that they belong, which is why they often dote and depend upon the opinions of others.

They often remind themselves of what they’ve failed at in life, often participate in “negative self-talk” like “I’m useless”, “I can’t understand this”, or “I’m just a loser”, and cower when criticized.   Another name for this person-ality is “co-dependent”; this people-pleasing behavior also manifests in most aspects of their lives.

If your answers are mostly “3’s”, you are a … Shame-ful-Eater

Shame is a very powerful emotion and is even scientifically linked with creating inflammation in a direct body-mind way.  This person-ality tends to eat certain foods secretly and quickly when nobody is around.

They therefore convince themselves that they haven’t eaten anything “forbidden.”  But, as Debbie Ford has said, the definition of DENIAL is Don’t Even Notice I Am Lying (and then I like to add “to myself”).

The way that you conquer Shame-ful eating is to literally “bring it out of the closet”.  First you need to acknowledge that you do it.

And then, as in all healing processes, sit with the discomfort of it.  Working with a professional to reveal why you started doing this behavior in the first place (because it’s a conditioned reflex that probably started very early in your life) wouldn’t hurt either.

If your answers are mostly “4’s”, you are a … Feeling-Soother-Eater

This person-ality is also called an “emotional eater” … someone who eats because  they have feelings such as stress, anger, and loneliness (any intense feeling, even happiness, can also trigger this behavior) that they’ve learned to stuff down with food.  Food, therefore, becomes their primary coping mechanism to deal with their world.

This can range from eating some of “trigger” foods (self-soothing foods you’ve chosen to be ritual tranquilizers … mine used to be red licorice) all the way to severe binge eating. The soothing, however, is most often short-lived; guilt and, often, self-loathing quickly follow.

If your answers are mostly “5’s”, you are an … Unconscious-Eater

According to Tribole and Resch’s book, Intuitive Eating, there are several different kinds of unconscious eaters. But I’m defining this person-ality as someone who thinks that they have no time to change the way they currently eat.

And will eat whatever is available, often scarfing up the doughnut, candy, or potluck dish that’s right in front of them. They may recognize the importance of good nutrition but feel they can’t focus on that right now.

They also may go long periods of time without eating due to their hectic schedule. Then overeat when something is available.

I also find these people generally take poor care of themselves (it doesn’t always manifest in their appearance but may show as missed doctor’s appointments, poor upkeep of their car or home, and so forth). And may have other person-alities in play, such as “Shame-ful” or “Feeling-Soother”.

Most probably they are masking their true feelings or desires in a haze of overwork or other compulsive behaviors.

If your answers are mostly “6’s”, you are a … Dieter-Eater

“Dieter-Eaters” also use diets as a way of coping with a perceived out-of-control world; they are the cousins of the “Perfect-Eater” but instead try to enforce illusionary control over their lives by trying one diet after another.  They are in denial that diets don’t either work or give them the feelings of self-worth or self-soothing that they desperately crave.

I used to work as a hospice dietitian and about every two weeks one of the nurses would be copying off a new diet book to give to all the others.  And they just all got fatter.

Albeit, they had very stressful jobs.  But this was also one of the most blatant examples of “Dieter-Eaters” I’ve ever seen.

Because each diet lasted a couple of weeks.  And then they were off to another one.

Believe me … I used to review diet books.  Many of them, unfortunately, were not only hard to follow, but downright preposterous.  So if you’re one of these kind of eaters, I encourage you to rethink this behavior ASAP.

This person-ality can also be called the “intuitive eater”.  They’ve never been on diets or, if they have, have abandoned them because they didn’t work and just left them hopeless, obsessive, and ultimately fatter.

They eat moderately and stop when they feel satisfied inside instead of fighting cravings, dieting, counting calories, or other forms of eating restrictions. In other words, “Good-Eaters” choose foods they like, eat with joy, and don’t feel guilt or shame about how, why, or what they eat.

So what do you do now that you’ve identified your Eating Person-ality?  Well, I’ll give you some more ideas (we’ve already discussed a few in this article) In Part Three.  But, in reality, just knowing a little about what you do with food may be enough to change it.  To be continued …

Do you think your Eating Person-ality is accurate?  If not, what other one do you feel you’re like?  How do you feel about your results? Feel free to comment below … 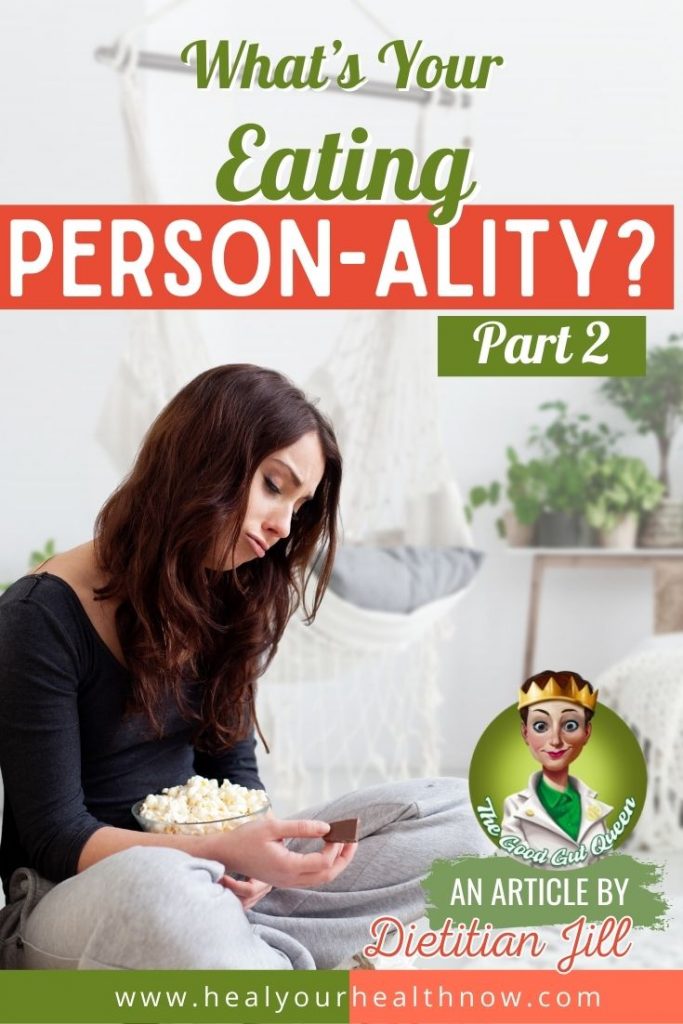