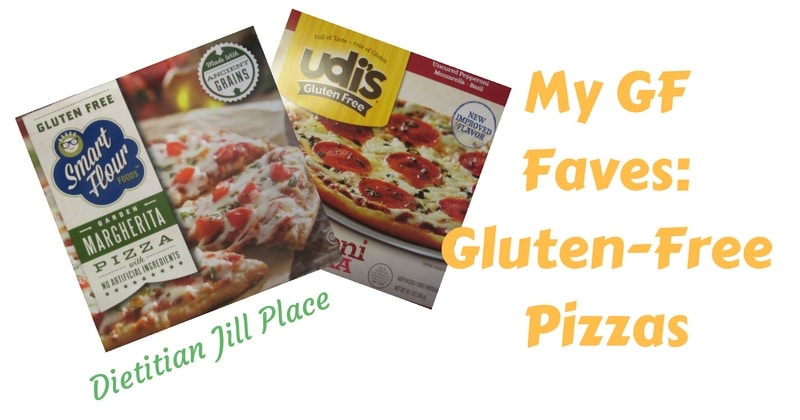 I’m starting a new feature of “Me and GF” called “My GF Faves”. Most of us don’t know WHAT to eat when we Go Gluten-Free. In my book, I talk about a guy who followed me three aisles in Whole Foods for GF advice. Now I’m giving it to you. Eat it up!

I’m sitting in my fave Italian restaurant waiting for my Gluten-Free pizza. I’m on my second glass of chardonnay and wishing I were home having a frozen one. The reality is that the restaurants use ready-made crusts. And that FROZEN ONES ARE BETTER! I also like the fact that I can get through all or most of the frozen ones. Because next day pizza isn’t like regular. I threw out the last leftovers …

I love the restaurant … Maria’s Italian Kitchen in Pasadena, California. But next time I think I’ll have the risotto. And eat my pizza at home instead.

So here are my own frozen faves and some suggestions from one of my fave magazines … GFF. You can get most of these either in the health food store or even in your nearby market. Prices vary so I’m not going to give you any; suffice to say, they’re pricier than a regular pie. And I always use a pizza stone (even though most say not) and the minimum bake time before I check for doneness; the minimum usually suffices in my oven. The pizza’s usually done when the cheese is golden and bubbly.

Against the Grain. GFF describes it as “flaky, buttery, grain-free crust (tapioca starch) with a zesty sauce and loads of mozzarella and Parmesan cheeses.” I’m partial to the Margherita. againstthegraingourmet.com

Udi’s. This is the one I was hankering for while sitting in Maria’s. When they said “New Improved Flavor” on the box, they were right. It came out of the oven plump, cheesy, crunchy and delicious. GFF commented … “Reminiscent of Totino’s Party Pizza; crunchy, thin crust (brown rice flour) and lots of mozzarella, jack and Parmesan.” My fave is the uncured pepperoni. udisglutenfree.com

California Pizza Kitchen. My apologies to Maria’s but this GF pizza is my fave eat-out one. According to GFF, “A familiar thin crust (brown rice and tapioca flours) loaded with tomatoes, cheese, and sweet basil.” cpkfrozen.com

I haven’t tried the last four but, now that I know about them, I’m going to indulge. How about you?

Leave Your Comments About My GF Faves: Gluten-Free Pizzas Below

Which GF pizzas, restaurant or frozen, do you go for? Please share with us to broaden our dough-scope.